Your throat is scratchy. You nose is dripping and your head is gently throbbing. You don't feel ill enough to justify taking a sick day, but you're far from your regular, healthy, productive self.

Welcome to world of the working wounded, the army of hacking, sneezing, watery-eyed employees who refuse to suffer their cold and flu symptoms lying down – or, at least, safely away from the workplace. While many feel pressured to soldier on with their jobs, there's a growing consensus that ill employees could be doing more harm than good by reporting for duty.

A recent study from Queen's University found it costs employers twice as much in productivity losses for employees who come to work while sick than for those who stay at home. Yet the same study showed that 83 per cent of U.S. adult survey participants continued to attend work or school while experiencing flu-like symptoms. The research, funded by a grant from Afexa Life Sciences Inc., the maker of cold remedy COLD-FX, also found one in three Canadian adults have a sore throat, cold or flu in any given month, and one in five ignore their symptoms of illness.

Earlier this year, the temporary staffing company Accountemps released the results of a survey of more than 430 Canadian workers, which revealed people are far more likely to be worried about catching a bug from their ill co-workers than to be impressed by their dedication. Fifty-seven per cent said they feared being exposed to their sick colleagues, and 29 per cent said they were concerned about their ill co-workers' well-being, compared with 11 per cent who said they would be impressed with them for working while unwell.

"I think a lot of people feel pressure [to work while sick]because they obviously feel a sense of obligation to their employer," says Anaar Dewjee, branch manager of Accountemps in Toronto. Some also tend to feel guilty about leaving their co-workers to pick up the slack, or believe that if they show up, they'll make a better impression on their bosses.

Workers, however, often aren't as effective on the job when they're unwell, Ms. Dewjee says. They also risk infecting others, and they may prolong their recovery if they don't rest up. "It can actually be counter-productive."

The trouble is, it's not always clear from one's symptoms whether an illness warrants time off, and how many sick days one should take.

Many flu-like symptoms, such as coughing, headaches, fever, nasal congestion and muscle aches, can be due to Influenza A, Influenza B, or any number of respiratory viruses, which behave differently, says Doug Sider, acting director for infectious-disease prevention and control at Public Health Ontario.

Further complicating matters, he adds, the severity of one's symptoms does not necessarily indicate the level of risk for spreading the illness. "If you've got mild symptoms, does that mean you're less infectious? Or if you've got more significant symptoms, that you're more infectious? We're not always certain about that."

Ideally, Dr. Sider says people should stay home for at least two to three days when they start feeling ill, as that's when they're most infectious. He acknowledges, though, that staying home isn't always feasible. "There's a whole series of workplace disincentives for people to do the right thing, in terms of basically isolating themselves when they're ill," he says.

Some workplaces, for instance, require employees to obtain a doctor's note, even though a crowded waiting room while they're at their most contagious is the last place people should be, Dr. Sider says.

If you absolutely must go to work, he advises practising good respiratory etiquette: frequent hand-washing, coughing into a tissue or sleeve and using alcohol-based hand rubs.

In general, after the first 48 hours, people's immune systems kick in but they could continue to spread illness for four to five days, says Bhagirath Singh, director of the centre for human immunology the University of Western Ontario. Regardless, they may not feel topnotch for a while.

Typically, a common cold can last around seven days, while the effects of some flu viruses can last several weeks, Dr. Singh says. "Obviously you will still be feeling miserable and terrible, but you won't be contagious." Cold comfort.

Sure, you're supposed to stay home when you're sick. But what if you have important deadlines to meet and you can't pry yourself away from work?

Inform your boss: "You might say, 'By the way, I'm feeling under the weather,'" he says. If your boss is aware you aren't feeling well, he or she may even offer to let you take some time off. If not, at least your employer knows why you may seem lacking in energy.

Work in an isolated area, if you can: Some employers have quiet rooms where you can set up a temporary work base. By keeping your distance, you'll keep your germs to yourself, and may even be able to take a few extra breaks.

Change your expectations: Don't be too hard on yourself if you're not as productive as you usually are.

Segment your work: If you find you're most alert first thing in the morning, devote an hour or two during that time to your most important work. Put 100 per cent of your energy and focus into your tasks for that spurt of time, then ease off and work at, say, 60 per cent later in the day. To maximize your productivity, you may need to move meetings around, or rearrange your tasks according to priority. 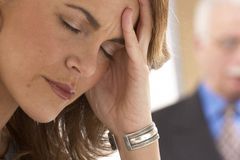 Most Canadians go to work when sick: survey
March 7, 2011
More moms call in sick than dads: study
March 17, 2011
Follow Wency Leung on Twitter @wencyleung
Report an error Editorial code of conduct
Due to technical reasons, we have temporarily removed commenting from our articles. We hope to have this fixed soon. Thank you for your patience. If you are looking to give feedback on our new site, please send it along to feedback@globeandmail.com. If you want to write a letter to the editor, please forward to letters@globeandmail.com.
Comments