Canada's national pastime has elbowed its way ahead of the groups considered most at-risk of serious illness or death from the H1N1 flu virus. Ranging from minor leaguers in Moncton to pros with the NHL's Calgary Flames and Toronto Maple Leafs, players are jumping the queue and getting the shot.

Some teams are defending the action, with the Maple Leafs saying it received vaccine through "normal distribution," as any other doctor's office might have.

Elsewhere, however, outrage has spilled over. An Alberta government official identified only as "the most senior staff member involved" in the Flames vaccination was fired Wednesday, five days after players and their families were offered the shot at a private clinic. The province said the "special treatment" was "unacceptable." It also emerged Wednesday that players for the Flames' minor-league affiliate were offered the shot.

Most teams have denied the action is queue-jumping, saying the athletes are high-risk. Teenager Evan Frustaglio, perhaps Canada's highest-profile H1N1 victim, had played a hockey tournament over the weekend before his death early last week.

"While all professional athletes are considered high risk to exposure and transmission of the flu due to excessive contact with other players, heavy travel requirements and public exposure, only certain players and staff have received the H1N1 vaccine," a Maple Leaf Sports and Entertainment statement said.

But Canada's chief public health officer refuted that, saying there's a difference between being at high risk of getting the flu, and of it causing serious illness or death.

"We have focused the priorities of who is to be immunized first based on who is at greatest risk of severe disease and dying, not on who is more likely to be exposed," David Butler-Jones wrote in an e-mail to The Globe. "Otherwise, school-aged kids would have been the first priority."

"Athletes are absolutely not at greater risk. Athletes share a locker room, but so do school kids in gym and in the classroom, and so do children in daycare centres," said Prof. Schafer, director of the University of Manitoba's centre for professional and applied ethics.

"In times of perceived health crisis, our near-universal sense of fair play dictates that neither wealth nor celebrity should buy you special access to life-saving care. Those who use their wealth or celebrity to jump the queue are thus attacking one of the most fundamental values of Canadian society and are legitimately reviled."

The Alberta decision to vaccinate the Flames "was a serious error in judgment on the part of the staff involved," said Stephen Duckett, president and chief executive officer of the board governing health delivery in Alberta.

"The special treatment for the Flames and their families is unacceptable to us and contrary to all of our existing protocols and processes. I apologize for this breach of our duty to Albertans," he said.

Flames president Ken King told a radio station Wednesday night that the firing was a "high price to pay," and that he planned to contact the sacked employee.

The club's minor-league team, the Abbotsford Heat, was offered the vaccine after five players fell ill. The club's doctor recommended the remaining 22 be vaccinated, team spokesman Dave Sheldon said. The doctor confirmed he inoculated them at his private medical practice over two days where other members of the public were also receiving the shot. Mr. Sheldon doesn't believe it was queue-jumping.

Meanwhile, the Maple Leafs insisted "no preferential treatment was requested nor received."

The team refused to say how many players got the shot, and whether there were underlying health complications.

In Moncton, 25 players and several staff were vaccinated, contravening New Brunswick's policy of prioritizing high-risk populations in the face of a looming vaccine shortage. "We have quite clearly communicated that such teams and sports groups, and so on, are not in the priority group," said Eilish Cleary," New Brunswick's chief medical officer of health. "Obviously, we don't want young healthy people who have no other risk factor to be done ahead of people who are at higher risk."

The province is one of few offering the vaccine to people under 18, meaning some of the players were eligible. However, 14 players on the roster are at least 18 years old. General Manager Bill Schurman echoed the Leafs' statement, saying: "We consider ourselves a pretty high-risk group."

Since getting the shot, 17 Wildcats have caught mild cases of the flu. Two have confirmed cases of H1N1, and the other 15 suspected. All the sick players are quarantined, and several games have been cancelled.

Queue-jumping isn't reserved to hockey. Tenants of Vancouver's Park Place complex were told last week the private Stein Medical Clinic would be giving vaccinations Thursday, at a cost of $15. The company said last night they're complying with regulations and only offering the H1N1 vaccine to high-risk groups, have put their "corporate clinics" on hold and aren't charging anyone for the vaccine.

Dr. Kendall warned that physicians who don't comply could be taken to task by the B.C. College of Physicians and Surgeons.

Prof. Schafer said the H1N1 flu hasn't proved as serious as might first have been feared, but that public health officials have failed to tailor their message to calm public demand that may have fostered queue-jumping.

"There are people who want to get service before others. So I don't think we should necessarily be surprised at that aspect of human nature. I think that we do have to look and see how we can make the system work … and then open it to others as we get more vaccine," she said.

The Toronto Raptors basketball team also said yesterday some of its players received the shot. A spokesman said there was no preferential treatment. The team is owned by the same company as the Maple Leafs.

Ontario New Democrat Leader Andrea Horwath grilled Health Minister Deb MatthewsÖ in Question Period on Thursday about the "high rollers" and professional sports teams who have gone to the front of the line for the H1N1 vaccine.

"This is entirely, entirely unacceptable," Ms. Matthews responded. "I don't care how famous you are, how wealthy you are, how well connected you are. You have an obligation to respect the priority lists."

On Thursday, Ontario New Democrat Leader Andrea Horwath grilled Health Minister Deb Matthews in Question Period about the "high rollers" and professional sports teams who have gone to the front of the line for the H1N1 vaccine.

"This is entirely, entirely unacceptable," Ms. Matthews responded. "I don't care how famous you are, how wealthy you are, how well connected you are. You have an obligation to respect the priority lists."

With a report from Caroline Alphonso, David Shoalts and Karen Howlett 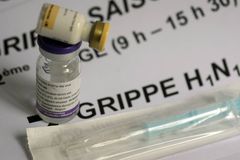 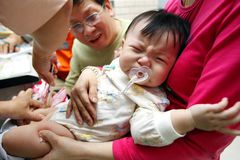 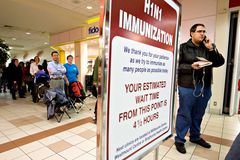 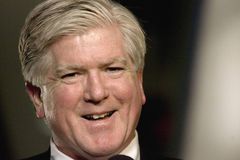 Ottawa expecting 1.8 million doses of flu vaccine next week
November 4, 2009
Doctor defends vaccination of hockey players
November 4, 2009
Follow Josh Wingrove,  on Twitter @josh_wingrove
Report an error Editorial code of conduct
Due to technical reasons, we have temporarily removed commenting from our articles. We hope to have this fixed soon. Thank you for your patience. If you are looking to give feedback on our new site, please send it along to feedback@globeandmail.com. If you want to write a letter to the editor, please forward to letters@globeandmail.com.
Comments