The decision by some provinces to remove public funding for OxyContin and its newer harder-to-abuse formulation, OxyNEO, is being cast by many politicians and health professionals as a significant victory in the battle against the scourge of painkiller addictions.

If it were only that simple.

In reality, pulling OxyContin and OxyNEO from provincial formularies will probably represent just a hiccup for drug abusers desperate to get their hands on opioid narcotic drugs and fails to address the root causes feeding growing dependence on prescription drugs in Canada, according to many medical and addiction experts.

"It's a step in the right direction, but it's a baby step," said David Juurlink, head of clinical pharmacology and toxicology at Toronto's Sunnybrook Health Sciences Centre and a scientist at the Institute for Clinical Evaluative Sciences. "I don't think the events of this particular month are going to change the overall number of patients who are using opioids, legitimately or not, by a great deal."

As doctors across the country continue to struggle with how to best treat legitimate patients who require strong painkillers and policy-makers attempt to take action to curb prescription-drug abuse, the question remains how to solve widespread addiction to opioids.

One thing seems clear: Delisting OxyContin and OxyNEO is not going to be the answer.

Several jurisdictions, including Ontario, Saskatchewan and the Atlantic provinces, have announced the removal of OxyContin and OxyNEO from the list of publicly funded drugs. The move coincides with drug maker Purdue Pharma phasing out OxyContin in Canada and replacing it with OxyNEO, a version specially formulated to resist crushing or liquefying, making it difficult to snort or inject. The patent on OxyContin expires this year.

OxyNEO will be available for those who had existing prescriptions for the old drug and for cancer and palliative-care patients.

Yet, even if provincial plans won't cover Purdue's notorious product, individuals whose private insurance covers the drugs will still be able to get them.

John Burke, president of the National Association of Drug Diversion Investigators, a non-profit organization and commander of a drug task force in Ohio, is concerned that the move to delist OxyNEO could lead to a bigger black market for pills brought in from other jurisdictions.

But restricting one drug will make only a dent in the country's opioid problem. There are several medications that can – and, in all likelihood, will – fill the void created by the delisting of OxyContin and OxyNEO.

"There are a lot of other options out there," said Peter Butt, an associate professor in family medicine at the University of Saskatchewan who studies addiction.

Amy Graves, an advocate from Nova Scotia who began speaking out against prescription-drug abuse after the death of her brother, says people in her community moved away from OxyContin years ago. The drugs of choice in Annapolis Valley include hydromorphone and methadone, opioids that probably will experience a surge across Canada now that OxyNEO will be harder to get, she said.

"OxyContin is not the drug of choice and I have a feeling it won't be in other communities either," Ms. Graves said.

Hydromorphone, sold under names such as Dilaudid and Hydromorph Contin, which are also manufactured by Purdue Pharma, are eligible for public funding in many jurisdictions across Canada. Generic forms of oxycodone are also available under many provincial plans. Experts argue that too much focus has been put on OxyContin, allowing for more abuse of other opioids.

In the United States, rates of addiction to prescription drugs have not dropped since the new tamper-resistant version of OxyContin was introduced in 2010, Mr. Burke said.

"It's kind of the balloon effect: You squeeze a balloon at one end and it just fattens up the other," he said, noting that the use of generic oxycodone and even heroin have soared since 2010. "If I'm an addict or you're an addict, we're going to find drugs to get high on."

Considering the landscape, Dr. Butt questions why the provinces would make it more difficult for patients to get access to OxyNEO, an opioid that has been designed to make it more difficult to abuse. "There's an inherent irony here," he said. "You would think the one that is safer would be more easily available."

Pain specialists, some of whom receive funding from makers of opioids, caution that there is a legitimate need to maintain access to powerful painkillers. It's an important point, as opioids do treat acute pain, such as a broken bone, well and can also aid patients living with debilitating chronic pain.

But that cautionary note can only go so far, Dr. Butt said. "When you have whole communities in the North running into very high problems with addiction, you've obviously gone too far the other way in prescribing," he said. "We have to have a different approach to chronic non-cancer pain."

Opioids, a class of drugs made from natural and synthetic compounds, were traditionally used to treat debilitating pain. The entry of OxyContin – a time-release drug made from the opioid oxycodone – into Canada in the mid-1990s brought with it an increase in the number of doctors willing to write prescriptions for a wider range of pain. Here are some common opioids.

Oxycodone: Available for years in combination with other ingredients, such as acetaminophen, to treat short-term pain and sold under names such as Percocet. OxyContin is a long-acting form that releases active ingredient over time. But when snorted, chewed or injected, the drug is released rapidly, producing a high.

Hydromorphone: Used to treat pain and sold under brand names such as Dilaudid. A growing number of reports suggest rates of addiction involving hydromorphone are on the rise, possibly as a result of restrictions on OxyContin.

Hydrocodone: A synthetic opioid that is combined with other medications to treat pain as well as coughs. It is available under such names as Dalmacol and Hycodan.

Fentanyl: A pain medication available as a transdermal patch. This drug is also being increasingly abused. 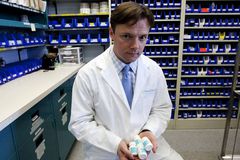