The sharp melody of the doorbell roused Gideon Sheps from his sleep one cool night in August.

It was 11 p.m. and a neighbour from across the street said she'd spotted Mr. Sheps's nine-year-old son Ben - who Mr. Sheps had put to bed more than an hour earlier - outside.

A week of relentless rain had turned a patch of their Toronto street - where repairmen had dug up a hole - into a mud puddle that Ben couldn't resist. He had slinked out of the house undetected and, in a matter of minutes, covered himself from head to toe in thick, brown sludge.

A few days later, Mr. Sheps had a locksmith install a $600 lock on the front door.

It wasn't the first time Ben had disappeared.

He has autism, a severe developmental disorder that affects brain development and can make social interactions and communication difficult. Ben is known as a "bolter" or "runner" - the name given to autistic kids who are often captivated by small distractions and prone to take off without warning.

For this reason, Mr. Sheps was struck by the case of James Delorey, a seven-year-old autistic boy from South Bar, N.S., who ran into the snowy woods surrounding his home on Saturday afternoon and was found two days later after a massive search effort.

Keeping up with runners is no small feat for parents, for whom installing padlocks on doors, foregoing bathroom breaks so they can always be by their child's side and even using a harness during outings is part of everyday life.

"For a lot of kids there is no sense of danger. There's no sense of, 'If I run out into the middle of the street I'll get hit by a car,'" said Suzanne Lanthier, the executive director of Autism Speaks Canada. "They don't have a sense of, 'I have to check in with mom or dad,' and they keep going and going."

Ms. Lanthier said there are therapies available for autistic children so they learn to answer when they are being called, but they don't work on all kids.

Mr. Sheps notes that just like James, his son is non-responsive, which means no amount of shouting his name and yelling for him to stop or come back will stop him after he's taken off.

"He can get lost in our house. We'll say, 'Benjamin, where are you?' and he's busy; he won't pay attention to you," said Mr. Sheps.

Just in the last week, when the temperature dropped below zero, Mr. Sheps found his son in the backyard in only a T-shirt and underwear. Ben couldn't wander too far since the backyard is gated and fenced, but Mr. Sheps still worries about his son constantly.

John Howard has a teacher's assistant work with him one-on-one at his school but the eight-year-old still managed to escape from the gated playground a few months ago. No one had even clued in that he was missing until a woman saw him walking up the street and brought him back to the school, said his father, Dean Howard.

"We're very vigilant when we're watching him. It's every minute of every hour of every day that John requires that kind of attention," said Mr. Howard, from his home in High Prairie, Alta.

But John and other autistic runners always seem to seize on the split-second when they aren't being watched to bolt. As a result, Mr. Howard's strategy is to minimize dangers around his son.

"We'll make sure where we live is away from water. I could see him walking to water and just following a fish or leaf in a stream of water," he explained.

Tina Fougere, the founder of the Canadian National Autism Foundation, said her 17-year-old autistic son doesn't take off as often as he did when he was younger, but is still considered a flight risk.

There were a few times when he was in elementary school in Hamilton, Ont., where he escaped from the school grounds and ran onto the road. After years of training him, he now knows to stop when he's asked and even responds to others' voices, she said.

In her ideal world, runners would be outfitted with a beeper, much like an ankle bracelet used to track people under house arrest. But she notes that such devices could do more harm than good.

"You're trying to help that child fit into society the best way we can, and yet you're drawing attention to them," she said.

Mr. Howard said when John takes off on his own, he often runs, but it's when he's walking that he faces the most danger.

"Because he's autistic, there's no visual cues for people to know he's out of place. It would be nothing to see him walking down the street," he said. "We live every day with the possibility that he will disappear."

Joy over boy's rescue turns to grief over his death
December 8, 2009 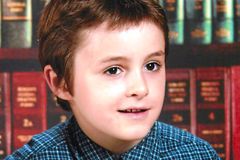