You sleep like an angel most nights of the week. But when Sunday arrives and the work week looms, you lie in bed watching the clock inch toward morning and cursing the sleep that evades you.

You are not alone. The problem – sometimes called Sunday night insomnia or Sunday insomnia – is probably a fairly common phenomenon. But how common isn't clear. It's not the type of serious sleep problem that would drive sufferers to seek medical help, nor is it the type of condition that entices sleep researchers to conduct studies on it.

In fact, the president of the American Academy of Sleep Medicine hadn't even heard the term before, though Nancy Collop understood instantly to what it refers.

"I've never actually heard of it per se as a written, described entity. But certainly everybody knows what it is, right?" says Dr. Collop, who runs the Emory Clinic Sleep Center in Atlanta.

A couple of things are probably at play for people who have trouble falling asleep on Sunday nights, sleep medicine specialists say.

You can think of the first as a sort of self-imposed jet lag, says Maureen Ceresney, a psychiatrist and sleep medicine specialist with the University of British Columbia's sleep disorders program.

While people generally try to stick to a schedule during the work week – heading to bed and getting up at roughly the same time – they may stay up later on weekend nights and compensate for that by sleeping later on Saturdays and Sundays. Or, if they're running a sleep deficit from the week, they'll take the opportunity to catch up by sleeping longer than normal on the weekends.

Messing with the timing of those factors on the weekends confuses your internal clock, making it unable to recognize that it's time to get tired when Sunday evening rolls around.

"If you're used to being on … a Toronto schedule and you do the equivalent of flying to Vancouver for the weekend in terms of the shift in your clock and then you go back to Sunday night and trying to go to bed at your usual time, your body may not be ready," Dr. Ceresney says.

Some people can handle these kinds of changes more easily than others, in the way that some people cope better with flying across time zones than others.

If you are one of the ones who fight to get back into a weekday rhythm, consistency is probably important for you, says . Nathaniel Watson, a sleep specialist and neurologist who is co-director of the University of Washington Medicine Sleep Center in Seattle.

"Keeping a consistent bed time and wake time on weekdays and weekends would probably be the most helpful thing that somebody could do if they're having this problem," says Dr. Watson, who notes it is useful to try to eat and exercise roughly around the same time too.

Another factor that could be contributing to Sunday night sleeping problems is anxiety – lying in bed fretting about the week ahead.

That's a sleep faux pas. Sleep specialists stress that beds should be used for two things – sleep and sex, Dr. Watson says. Not reading, not TV watching, and not tossing and turning.

Worrying – and then worrying that the worrying is keeping you awake – can create a kind of learned or conditioned sleep problem that's called psychophysiological insomnia. Bed isn't about where you sleep, but where you can't sleep.

So if you aren't sleeping, don't just lie there and stew. "You should get out of the bed and go do something that's relaxing for you until you're sleepy again and then try to go back to the bed," Dr. Collop says.

That relaxing something will vary from person to person, but you should probably aim for an activity that's a bit dull or repetitive, Dr. Ceresney says.

Some people find reading soothing, while others get the desired effect from listening to music or knitting.

Dr. Collop recommends doing the activity in dim lighting and avoiding options that have you staring at lit screens, such as iPads, computers or TV.

She and Dr. Watson both recommend that people who find themselves lying awake worrying should consider keeping a worry diary. The idea is to set aside some time before bed time – 15 minutes, half an hour – to sit down and write about what you have to do in the week ahead and the challenges that are concerning you.

At the end of the allotted time put the worry diary away – not in your bedroom – and let the problems fester on the pages, not in your brain. 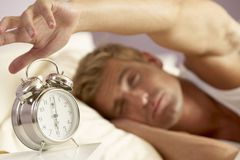 Your need for sleep may lie in your genes
August 21, 2009
Follow us on Twitter @globe_health Opens in a new window
Report an error
Due to technical reasons, we have temporarily removed commenting from our articles. We hope to have this fixed soon. Thank you for your patience. If you are looking to give feedback on our new site, please send it along to feedback@globeandmail.com. If you want to write a letter to the editor, please forward to letters@globeandmail.com.
Comments