Sunscreens are a minefield of confusion: claims of being sweatproof and waterproof, SPF numbers as low as two and labels that promise "broad spectrum" protection. There may be little evidence backing up some claims and no way for consumers to ensure all the promises made on the bottle will lead to better skin protection.

Now, officials at the U.S. Food and Drug Administration are hoping to change that by creating new rules to crack down on misleading claims and clarify what protections various sunscreens carry.

Although Canada has its own set of regulations for sunscreen, dermatology experts have complained for years they aren't strong enough and have helped create a marketplace filled with products that make a dizzying array of promises difficult to understand and, in some cases, challenging to prove.

They are calling on Canadian officials to adopt new rules that will bring Canada in line with the United States, and perhaps go even further than the new rules outlined by the FDA.

"I think it's been something that's been needed for quite a long time," said Ian Landells, president of the Canadian Dermatology Association.

One of the most contentious areas of the sunscreen debate is protection against UVA rays, which damage skin and increase the risk of skin cancer. The FDA has now adopted new rules to ensure credible evidence backs up claims for sunscreens promoting UVA protection, while in Canada, no such rules yet exist.

There are two types of ultraviolet radiation that can contribute to the development of skin cancer: ultraviolet A and ultraviolet B.

Most consumers are familiar with the effects of UVB rays, which come in the form of sunburns if skin is not protected and an increased risk of skin cancer. The sun protection factor, or SPF, in sunscreen helps protect skin against the effects of UVB.

But the threat posed by UVA rays has long remained under the radar. UVA rays are a major cause of skin aging and also contribute to the risk of skin cancer. The SPF factor in sunscreens does not protect against UVA rays. It's a huge gap and a major problem.

In response to growing concern over exposure to harmful UVA rays in recent years, more sunscreen makers have been creating "broad spectrum" products that promise to protect against both types of rays. But no standards or regulations have been in place to test the claims and ensure their accuracy.

Under its new rules, the FDA has created a test that will measure a sunscreen's UVA radiation protection in relation to UVB protection. Products that pass the test can be labelled as "broad spectrum."

"For the first time there are uniform standards on broad spectrum sunscreens," said David McLean, head of cancer prevention programs at the B.C. Cancer Agency who is also a dermatologist. "Sunscreens that are not broad spectrum are frankly dangerous. People are applying them thinking they are blocking the dangerous wavelengths of light."

Health Canada, which has no testing mechanism in place for UVA claims, said it is reviewing its sunscreen rules in the wake of the FDA's move. The department said it is moving toward adopting an internationally accepted test for UVA and UVB protection, but gave no indication when the changes will be adopted. It also declined giving any other details until the new regulations are ready.

Dr. McLean said moves to regulate broad spectrum UVA and UVB protection and increase scrutiny on sunscreens are overdue. The resulting clearer labels will help steer consumers toward the best products, he said.

"It's evening out the playing field so only quality sunscreens are likely to be purchased in the future," he said.

But one of the FDA's proposed changes is being met with controversy. The agency wants to restrict the SPF on sunscreens to read "50 +" because it argues "there is not sufficient data" proving products with SPF values higher than 50 offer greater protection. The restriction is only a proposal and the FDA will seek public comment before a final decision.

Others say they are discouraged that regulators aren't taking a closer look at potentially harmful ingredients commonly used in sunscreen, such as retinyl palmitate, which some suggest could accelerate development of skin cancer or even harm a woman's fetus, and oxybenzone, which some fear is a hormone disruptor.

"There's still a lot of ingredients in sunscreen that are of concern," said Celeste Cote, toxics program manager at Environmental Defence, an advocacy group. "People like to say, 'Oh it's just a little bit it's not a big deal," but I really think if there's alternatives out there let's go with what we know is safe."

Environmental Defence advises concerned consumers to pick mineral-based sunscreens, such as those with titanium dioxide and zinc oxide. Many experts dispute the link between sunscreen ingredients and health risks and argue the problems of not wearing sunscreen are much greater than the theoretical risk of harmful ingredients.

Dr. McLean also emphasizes that sunscreen is only an option and that there are several other important ways to protect against the sun's harmful rays. He and other dermatologists have long advised people to avoid the sun at peak hours, to wear hats and clothing and stay in the shade whenever possible.

Other changes that will take effect by next summer under the new U.S. rules are that sunscreen manufacturers can no longer label their products as being waterproof or sweatproof, or call them "sunblock" because such claims "overstate their effectiveness," according to the FDA.

Companies will be allowed to say their products are water resistant, but must clearly state on the front of the label whether resistance lasts for 40 or 80 minutes while sweating or swimming.

Another change is that companies must submit data if they want to claim their products protect for more than two hours without reapplication or that they protect the skin immediately after being applied.

Sunscreens that have an SPF lower than 15 won't be allowed to claim they help prevent skin cancer or early skin aging, but only that they help to prevent sunburn, rules which already apply in Canada. 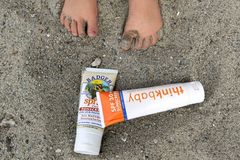 Not all sunscreens are created equal
June 19, 2011 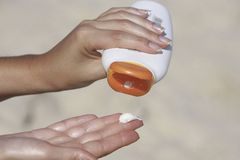