To most of us, our daily coffee, tea or Diet Coke routine is as automatic as breathing. Sure, we know that the stimulating effect of caffeine is part of the equation – and that too much might make us jittery. But most of us have no idea how much caffeine we're ingesting nor how profoundly our buzz of choice has shaped our lives, not to mention human history.

In his new book, Caffeinated: How Our Daily Habit Helps, Hurts and Hooks Us, Murray Carpenter cuts to the chase: Did you know that a tablespoon of pure caffeine would kill you?

In its purest form, caffeine would be indistinguishable from cocaine – and, interestingly, is often cut with street drugs for an added kick, he writes. U.S. Navy Seals use high doses of caffeine to battle sleep deprivation.

And the latest edition of the psychiatry diagnostic tool, the Diagnostic and Statistical Manual of Mental Disorders, lists "caffeine withdrawal," along with "caffeine intoxication" and "caffeine-induced" anxiety and sleep disorders, suggesting this stuff is to be taken as seriously as cocaine, opiates and nicotine.

For most of us, our mild addictions won't put our health in jeopardy. But it would be nice to know how much we – and our children – are consuming.

Efforts to regulate the stimulant, dating back a century to the dawn of Coca-Cola, have largely failed, even as new caffeine delivery systems such as pod coffees, high-dose caffeine drinks – even gum – flood the market. While many of these have a precise dose of caffeine, it's not so clear cut when it comes to other beverages.

In one study Carpenter cites, the caffeine content in a grande cup of Starbucks coffee can range from 260 to 564 milligrams.

We spoke to Carpenter from his home in Belfast, Maine.

What is caffeine – chemically and philosophically?

In its purest form, caffeine is a bitter white powder, a drug, a simple chemical compound, that occurs naturally in plant products over the world. Its prime function seems to be as an insecticide. In humans, it functions as a stimulant. One of the interesting things about caffeine is that most people take it every day. A lot of us think we're a soda drinker or a coffee drinker. But really what we're doing, in the clinical sense, we're self-administering a psychoactive dose of a mild stimulant.

We have historically sought it out wherever we are.

Wherever caffeine occurs naturally people seem to learn quickly that it's a stimulant and put it to use. I visited the area at the border of Chiapas, Mexico, and Guatemala, which is where we have the earliest physical evidence for the human use of caffeine, more than 3,000 years ago. They were drinking frothy cold chocolate drinks. In northern Africa, people were eating coffee beans. In Asia, tea became popular. The origin myth of tea is about its stimulating effect.

We have toxic-looking neon energy drinks to represent our culture. Fitting?

It is, but it's a more natural evolution than it appears. It feels more romantic and natural to use caffeine as a naturally derived product. One of the things that astonished me was the German chemist who learned to synthesize caffeine rather than extract it. In 1905, he won a Nobel Prize, partly for his research on caffeine. In his address, he mentioned he imagined that people would soon be using synthetically produced caffeine in beverages along with synthetic coffee flavours. It's surprising to me it's taken this long to get here. [These energy drinks] seem like a modern phenomenon, but they've been on the horizon for quite some time.

We've deconstructed it and reconstructed it … A lot of this has to do with presenting caffeine in a form that's socially acceptable. If you went to Starbucks and offered to buy me a coffee, I'd say sure. If you pulled out a cellophane package and said, "I'm taking 240 milligrams of caffeine, would you like a dose?" I would say, "I think you have a problem." I think we have a sense of unease about the druginess of caffeine.

The history of the company behind the K-cup coffee pod method reinforces the drug imagery.

Bob Stiller became a billionaire, at least briefly, through Green Mountain Coffee Roasters – and much of that success was single-serve pods. His original fortune was from E-Z Wider rolling papers, which were an innovation he and a partner developed in the 1970s to address a problem people had when rolling joints. Cigarette papers were too narrow. In both cases his success was based on products to deliver single servings of a popular psychoactive drug.

But we do worry about kids and all these brightly coloured energy drinks.

Parents should be aware of what products caffeine is in, and at what levels. A recent pediatrics study found that most children in America take caffeine daily. For 12 to 16 year olds, it's 63 mg a day on average. Because a 12 to 16 year old might weigh a lot less than you or I, they'll get the effects of caffeine at a much lower dose. If a 90-pound kid is drinking a Diet Coke after dinner, he would be getting the same caffeine dose I would by drinking a Red Bull after dinner.

At the same time, many of us are nerding out about coffee beans, roasting; it's "terroir" instead of worrying about caffeine.

Starbucks spends very little time talking about caffeine. Imagine if you went into Starbucks and one of their many chalkboards were dedicated to the range of caffeine in their products. It needn't be a regulatory effort. It would be a way of opening up the conversation about caffeine a little bit.

Why are energy drinks regulated (though more for their ginkgo than their caffeine) and coffee isn't?

It's a grey area because caffeine is in so many popular products; the conversation always seems to creep right up to the edge of coffee and stop right there. A 1911 trial in Chatanooga pitted the predecessor to the U.S. Food and Drug Administration, the Bureau of Chemistry, against Coca-Cola. Even at that time, a lot of the testimony and comments were: 'This is less caffeinated than coffee and you wouldn't regulate coffee, so why would you regulate these products?' That's a question people are still asking.

By the numbers 1: The number of tablespoons of caffeine that in its purest form as a white powder will kill you.

1: The number of pounds of coffee that Catherine the Great used to make her daily five cups of coffee.

8: The number of the United States' top 10 soft drinks that are caffeinated.

260-564: The range of caffeine content in milligrams that was found in identical 16-ounce Starbucks coffees during one study. 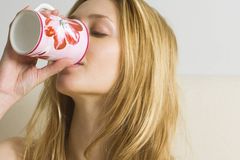 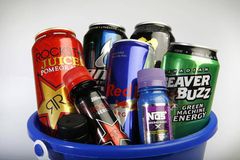 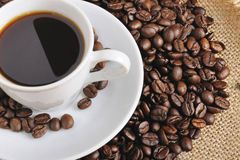