A growing number of Canadian children with chronic illnesses are being treated with complementary medicine, researchers say, but parents don't always tell doctors they are using the alternative therapies.

Yet informing health-care providers about vitamins, herbal and homeopathic remedies is important because in some cases they can adversely interact with traditional medications, the researchers say.

In a survey of parents having their children treated at two Canadian pediatric hospitals, researchers found that alternative medicines and such therapies as massage and chiropractic were commonly used.

"Our study found that many, many children use complementary therapies, and unfortunately oftentimes parents do not necessarily disclose this use when they're talking to their child's health-care team," said pediatrician Dr. Sunita Vohra, co-principal author of the study.

The research, published Monday in the journal Pediatrics, found almost 20 per cent of families surveyed said they had not told their physician or pharmacist about using both prescription and alternative medicines together.

"The reasons for this are probably many and varied," Vohra said. "Sometimes, parents don't feel comfortable bringing it up. Sometimes, they're not sure how that information is going to be received by the health-care team."

And in other cases, parents may not think the information is relevant because they may not consider a herbal remedy, for instance, as being a medicine, she said.

The study involved a total of 926 families at 10 different clinics in Edmonton and Ottawa, with parents asked to fill out an anonymous questionnaire in the waiting room prior to their child's appointment.

The young patients were being seen at clinics in the two hospitals that deal with pediatric cardiology, gastroenterology, neurology, oncology and respiratory health conditions.

The most common complementary medicines used were multivitamins or minerals, herbal products and homeopathic remedies, while the most often-used alternative therapies were massage, chiropractic, relaxation and aromatherapy.

Almost half reported using forms of complementary remedies at the same time as being treated by conventional medicine, while about 5 per cent said they used such alternative therapies instead of standard medicine.

The study also found that about 56 per cent of respondents were treating their youngsters with alternative forms of medication at the same time as they were taking prescription drugs.

But such concurrent treatment can be risky: The study found 80 cases of interactions between complementary remedies and traditional drugs, including 19 considered moderately adverse and six that were deemed severe.

Fish oil, for instance, can cause the blood to thin. Combining it with a pharmaceutical blood thinner can result in bleeding, Vohra said.

Echinacea, a herb taken by many people to boost the immune system, can counter the effectiveness of chemotherapy used to treat cancer, she said.

"There's all kinds of medications that can interact and you have to [assess] it on a case-by-case basis," noted CHEO pediatrician Dr. James King, who led the study with Vohra.

"The big thing is if you don't ask about it, you don't know to check, right?" King said.

Vohra also cautioned that "more is not necessarily better."

"We have seen patients that have gotten into trouble if they expose themselves … to polypharmacy – the idea of taking many things at the same time," she said. "Even though the things they're taking are natural health products, if you're on a long list of them, I would be careful. 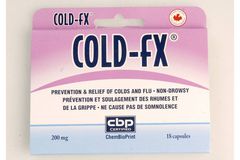