In the fast-evolving Ebola epidemic, the worst-afflicted West African country doesn't need treatment beds quite so desperately any more. Hundreds of Ebola beds, in fact, are now sitting empty as the crisis appears to ebb in Liberia.

According to health workers on the ground, Liberia needs a new strategy: Instead of formal treatment centres, it needs agile teams of rapid-response workers to rush into remote hot spots and extinguish new outbreaks as they occur.

Yet the Obama administration is still officially committed to its old strategy of building 17 treatment centres in Liberia, while health experts increasingly criticize it for its over-emphasis on an outdated solution.

The biggest Ebola treatment centre in Liberia has 250 beds, yet today it has only about 50 patients. About 80 per cent of its beds are sitting empty, according to Médecins Sans Frontières (Doctors Without Borders), which runs the centre.

The group confirmed it is witnessing a decline in Ebola cases in Liberia for the first time since the crisis began, with cases hitting zero in some regions. But this new phase of the crisis needs a fresh response, it said.

"While the international response is finally scaling up in Liberia, MSF is concerned that the strategy is related to the needs of two months ago … with an over-emphasis on constructing large-scale Ebola isolation centres," the independent humanitarian group said in a statement on Monday.

"Isolation units in Monrovia and some other parts of the country now have adequate capacity, and we must adapt the strategy if we want to stay ahead of the curve and beat the epidemic," it said. "The international aid response must rapidly adapt to a new phase of the Ebola epidemic, with focused efforts on hot-spot areas."

Largely because of historical connections, the United States has been focused on helping Liberia, while Britain concentrated on Sierra Leone and France targeted its former colony, Guinea. As many as 4,000 U.S. soldiers are being deployed to Liberia, mostly for engineering and logistical tasks.

The first Pentagon-designed treatment centre, a 25-bed tented facility, opened its gates last week, about two months after Mr. Obama announced plans for the $22-million facility. Yet by then, two-thirds of Liberia's 696 treatment beds were reported to be empty.

Officially, the epidemic has infected more than 13,000 people and killed nearly 5,000 people. Because of under-counting, the true numbers are believed to be at least twice as high.

And while the epidemic continues to spread in Sierra Leone and Guinea, it now appears to be declining in Liberia, the country that has suffered the heaviest death toll. The number of new Ebola cases in Liberia these days is only about a third of the number at the peak of the crisis.

Liberian health officials began to notice the first signs of improvement in late September, with fewer people dying and fewer patients waiting at the gates of treatment centres. Global experts were cautious at first, but today the trend is clear. The decrease is partly due to more effective educational efforts, larger numbers of treatment beds, growing use of cremations and safe burials, and greater community involvement in the response to the crisis.

Yet it is far too early to declare the crisis over. Earlier this year, the Ebola outbreak seemed to be ebbing in Guinea, and then it roared back. Even in Liberia, the apparent decline could be deceptive if some families are hiding patients at home, or if transportation problems are preventing patients from reaching the treatment centres.

Health experts are worried that the progress in Liberia will lead to a premature declaration of "mission accomplished."

This could drain resources from the crisis and allow a resurgence in the future. "We can't afford complacency," said Stephen Morse, a Columbia University epidemiology professor, in a media briefing on Monday. 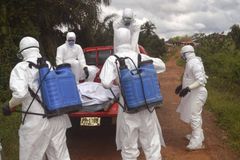 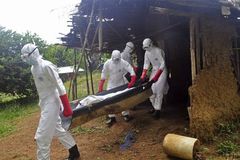