Float spas are surging in popularity, and devotees claim they relieve everything from pain to PTSD. Wency Leung reports on whether this is a breakthrough in restorative therapy or simply an empty fad 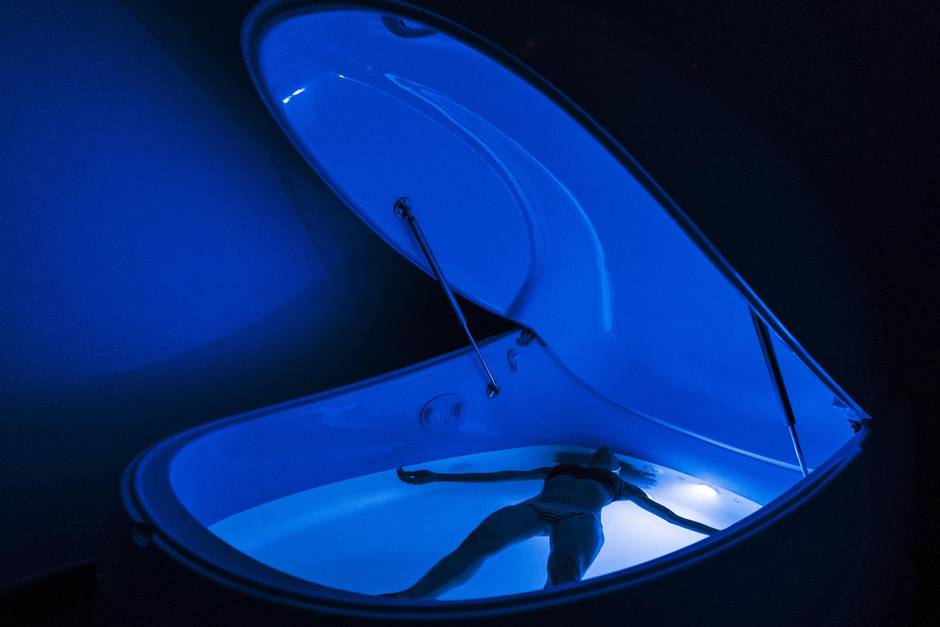 In recent years, float spas have been cropping up across the country ,touting wellness benefits. (An Rong Xu/ NYT)

He felt like the world’s smallest six-foot, nine-inch-tall man. In 1987 at the age of 20, Brent Giroux was on his motorbike when a truck struck him and drove its front wheels on top of him. The near-fatal collision left him with severe head trauma and in chronic pain, particularly in his back and knees. His brain injury seriously hindered his memory, dampened his mood and shattered his self-esteem.

“I couldn’t talk to anybody. Why would anybody want to talk to me? I’m a nobody,” he says.

For decades, he struggled to get his life in order and suffered thoughts of suicide. His stutter, which he had before the crash, became much worse.

Then, around 2010, after an acquaintance suggested he start up a flotation therapy business, Giroux tested the effects of floating for himself. He visited a Toronto chiropractor who had a flotation pod and immersed himself in the large, dark tank filled with water containing a high concentration of Epsom salt. As he drifted in the somewhat chilly liquid, Giroux found himself feeling as though he were awake, yet dreaming.

After an hour-long session, he says he left the chiropractor’s third-floor office with his interest piqued, feeling relaxed and pain-free for the first time in decades. “I recall walking down he stairs very slowly, going, ‘Ooh, what’s going on?’” he says. “Pain was like breathing for me. Being pain-free was like, ‘Whoa, what the hell? This is weird.’”

Giroux, who opened a flotation clinic in Sudbury, Ont. four years ago, credits regular flotation therapy for alleviating his pain, lowering his stress, boosting his mood, restoring his self-confidence and reducing his stutter.

Floating itself is not new. The use of float tanks goes back to the 1950s, when neuroscientist John Lilly began experimenting with the effects of isolation and limited sensory stimulation. But in recent years, floating has undergone a new surge in popularity, as float spas pop up across the country touting wellness benefits. And new techniques of measuring brain activity now offer scientists the ability to investigate how floating affects the nervous system. They can also test proponents’ reports that it helps all kinds of conditions ranging from pain to post-traumatic stress disorder.

At H2O Float Spa in Toronto, which opened in 2014, co-owner Jack Ouzounian says his clients float for a variety of reasons. Parents bring children with attention-deficit disorder to help them experience calm. University students visit during exam period to sharpen their mental focus and improve their retention of information. Physiotherapy patients find it complements their recovery from car accidents and other injuries. Some clients tell him floating eliminates their need for pain medication. Others do it to enhance their meditation practice.

Ouzounian, who is also a personal trainer, says floating helps him stay limber and relieves muscle aches and stiffness. The first time he tried it, some 30 years ago, was a revelation, he says. “It felt like I had a new body.”

The testimonials may be strong, but research on the effects of flotation therapy is thin. U.S. clinical neuropsychologist Justin Feinstein says he suspects this may partly be because Lilly, the man who pioneered flotation research, veered from the mainstream scientific community. Lilly wrote extensively about his self-inflicted experiments of floating while on high doses of psychedelic drugs, including lygersic acid diethylamide (LSD) and ketamine. His work reportedly inspired the popular sci-fi horror novel and movie Altered States.

Floating gained renewed scientific interest in the 1970s and 80s, led by Canadian psychologist Peter Suedfeld, who explored how the dark, quiet, isolated float-tank environment could have therapeutic benefits by promoting relaxation. With fellow researcher Roderick Borrie, he coined the term “Restricted Environmental Stimulation Therapy,” which helped separate the use of float tanks from their negative associations with sensory deprivation, which was thought to be stress-inducing.

But Feinstein says that spike in research petered out by the early 1990s, as funding dried up and scientists came up against limitations in technology.

“They didn’t have tools to measure much during the float itself,” Feinstein says, noting that much of the research conducted during these decades relied on participants’ self-reports of how they felt before and after. 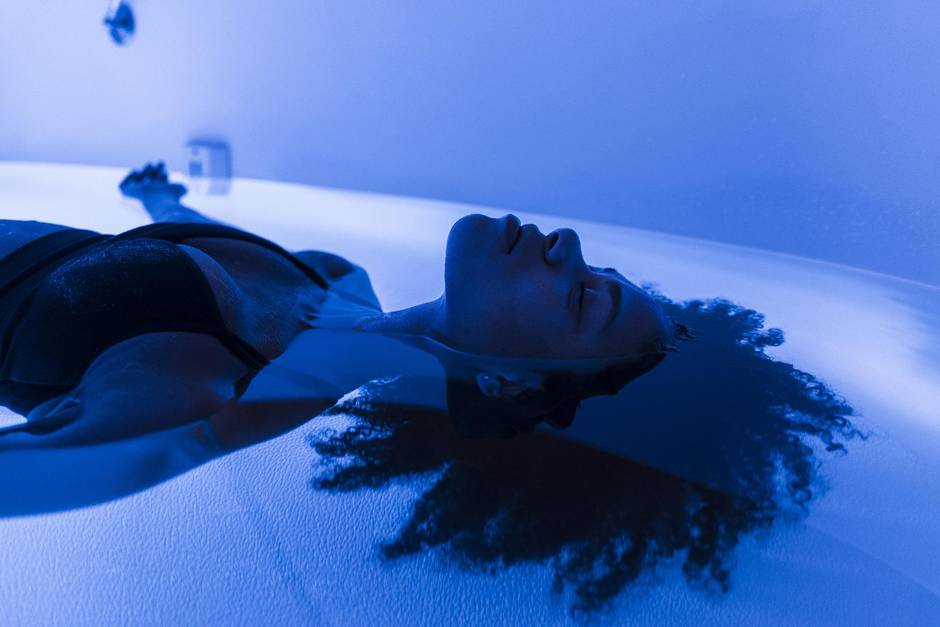 The testimonials may be strong, but research on the effects of flotation therapy is thin. New techniques are allowing researchers to study changes in the brain after floating. (Shane Bevel)

Feinstein, however, is now aiming to pick up where earlier investigators left off. He is the director of the Float Clinic and Research Center at the Laureate Institute for Brain Research in Tulsa, Okla., which he says is the only lab in the world studying what happens in the brain during floating.

Feinstein says he’s currently focusing on basic research, with the aim of building toward clinical research on individuals suffering from anxiety. Some preliminary findings show a reduction in activity in areas of the brain involved in emotion and anxiety after floating, as well as heightened activity in areas in the brain involved in reward and positive affect after floating, he explains. Subjectively, after floating, healthy participants also report decreased anxiety and increased serenity. And although Feinstein is reluctant to draw conclusions until he’s able to review complete data, he notes that study participants who float seem to have a different experience than those in his control group, who recline for the same period in a zero-gravity chair.

“Just the act of lying there for an hour or an hour-and-a-half in this comfortable chair is not getting your brain or your body to that same physiological state,” Feinstein says.

He suggests it’s likely not necessarily the act of floating itself, but a combination of floating and multiple other factors involved in the floating environment that creates the condition for profound relaxation. This includes an absence of light and sound and carefully regulated water and air temperatures that are matched to skin surface temperature (around 35 degrees C). The latter creates the feeling that the boundaries between one’s body and the surrounding environment become blurred.

Feinstein says floating may offer a shortcut to achieving a meditative state. Minimizing external stimuli seems to allow the nervous system a chance to relax from constantly having to react to the environment, he explains.

He emphasizes that further investigation is needed, but hypothesizes the reason people turn to floating for such a wide range of conditions may be because it ultimately counters the harmful effects of stress.

“And stress is so ubiquitous, it sort of exacerbates every single condition out there, whether it’s a mental health condition or a physical condition, it doesn’t matter,” he says.

Whatever the benefits, they don’t appear to last long outside the float environment. Some people report feeling a sense of serenity for several hours after floating and some even feel the effects for several days. “But no one’s ever actually measured this systematically,” Feinstein says.

Enticed by the idea of floating, I was enthusiastic, albeit a little nervous, to try an hour-long session in a pod at Ouzounian’s H2O Float Spa. Initially, the sensation of being suspended in darkness was pleasant and peculiar. The lukewarm, Epsom-salt-saturated water felt slimy to the touch and indeed, after a few minutes, I ceased to be able to distinguish where my body ended and where the water began. I let my mind wander and listened to my breath, the sound of which was amplified since I was wearing earplugs, as instructed. For a brief moment, I could grasp the appeal of this restricted sensory environment. 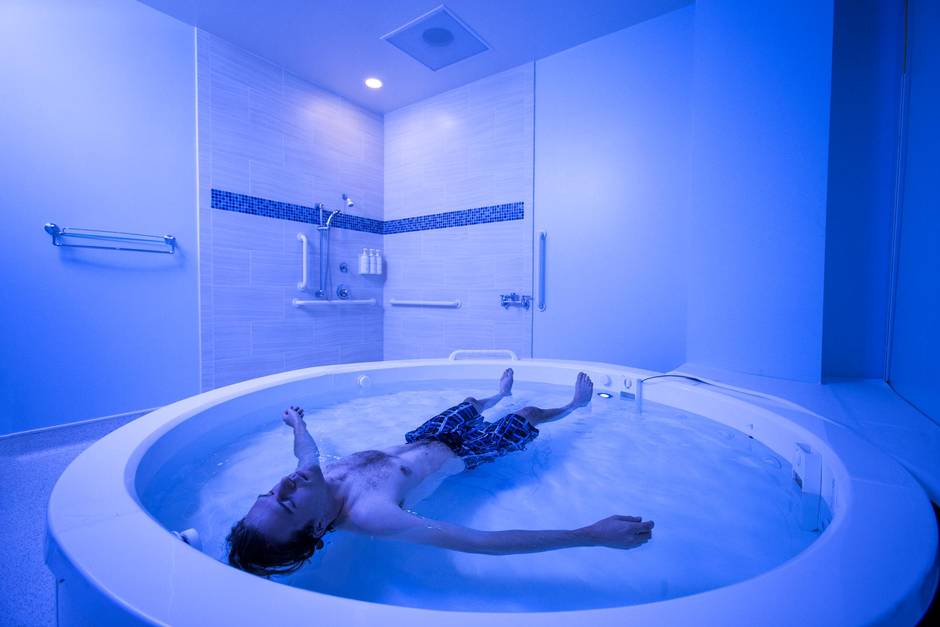 While some people find their experience in float tanks relaxing and healing, others might feel trapped. (Shane Bevel)

But no sooner did I start getting used to being in the pod, than I was surprised to find myself becoming increasingly uncomfortable and agitated. The lack of tactile stimuli felt strangely cloying. Like eating a mushy meal without any texture or lying in a too-soft bed, the absence of resistance was frustrating. Far from feeling relaxed, I felt annoyed and restless.

I had been warned, however, that it could take two or three sessions before one truly becomes accustomed to floating and gets the full effect.

Still, floating certainly isn’t for everyone. Norman Farb, assistant professor of psychology at the University of Toronto, Mississauga, says that similar to meditation, people can have very different responses to floating.

Farb himself has tried it and enjoyed the experience, finding it restorative. But for others, especially those who react to down time as a cue to find another activity with which to occupy themselves, the lack of external stimuli can feel “confronting,” he says.

“Being left with one’s own thoughts is like the worst thing for people if they’re not really in a good place to deal with those thoughts,” he says.

For individuals who already feel dissociated from their experiences, such as people who feel emotionally “numb” or don’t find a lot of meaning in their lives, floating may not offer much in the way of therapy, Farb adds. And for some people with panic disorders, anxiety disorders and post-traumatic stress, which may be triggered by certain physical sensations such as a strong heartbeat or the feeling of their breath in their chest, “you’re putting them into a situation where there’s nowhere to run.”

Whatever happens during floating, Giroux, the collision victim, says it has been life-changing for him.

He now floats about once a month and although the pain doesn’t disappear completely, it has never returned to the same level as it once was. His thoughts of suicide have evaporated. His spiritual health, he says, has improved greatly.

“Which sounds pretty far-fetched,” he admits, “but it’s a pretty cool experience.”