Influenza is notoriously mercurial, forcing even the experts to guess at which strain will dominate from one year to the next. As Canada is learning this winter, almost as unpredictable as the virus itself is whether the public will be willing to embrace flu vaccination.

Public Health officials regularly plead and cajole, but most years the majority of people pass on getting a shot. Canadian flu vaccination rates sit pretty squarely in the one-quarter to one-third range, Statistics Canada data show.

But occasionally we experience a phenomenon such as what has been happening in Western Canada where, undeterred by frigid temperatures, people embarked on sometimes desperate searches for flu shots – something they should have done weeks ago to get optimal protection.

While public health authorities are delighted people want to be vaccinated, they are puzzled by the unexpected clamour for flu shots. Going by the numbers, this year's flu season is active, but not overly severe.

So what the heck is going on? When it comes to flu shots, why does cool indifference sometimes give way to white hot demand?

"The psychology of influenza vaccination uptake is sometimes almost as complex as the disease itself," says Michael Osterholm, director of the Center for Infectious Diseases Research and Policy at the University of Minnesota.

"We want everyone to be vaccinated. But the question is: Why do we sometimes have these runs?"

So far this year the data collected by the Public Health Agency of Canada and the U.S. Centers for Disease Control suggest North America is experiencing a normal sort of flu season.

Hospitalization rates for influenza, for instance, are lower than those of some recent years. And where 171 children died from flu infections last winter in the United States, so far this year there have been 10 pediatric deaths there.

"I think that this year will assuredly end up less – as far as sheer numbers – than the 2009 pandemic," says Dr. Michael Jhung, a medical epidemiologist in the CDC's influenza division.

"And it looks like it will have had less activity than last year, but that I'm not so sure about until we get all the data in."

But Jhung and others say the overall picture may be masking a shift that the public is actually picking up on. It's not that more people are getting admitted to hospitals or dying from flu. The concern stems from who is getting severely ill and who is dying.

For years, flu saved its biggest wallop for the elderly. But since the new H1N1 strain emerged in the 2009 pandemic, you can't assume that grandma and grandpa are the folks most likely to end up in ICUs with flu.

As was seen in the pandemic, the elderly aren't as susceptible to this H1N1 as they are to H3N2, the virus that dominated last season. Younger people are more likely to get infected with this virus, and some of those infections lead to serious illness.

"We're used to our parents being the ones who end up in ICU or dying, sadly.... But now it's us, right?" says Dr. Perry Kendall, chief medical officer of health for British Columbia.

"So if you're a 50-year-old, you would be sad if your father or your mother went into ICU. But when it's your spouse or your brother, it's different. The risk is a lot more proximal."

By flu terms, the numbers of deaths being reported this year are still small. Two deaths here, 10 there. Each is a tragedy. Still, the reality is lots of people die from flu every year; the Public Health Agency of Canada estimates the toll to be about 3,500 Canadians a year.

But those smaller numbers actually mean something to people, where the larger estimate is an abstraction, suggests Dr. Kumanan Wilson, a senior scientist at the Ottawa Hospital Research Institute.

"A few stories that are particularly vivid and clear can start to create a perception of risk that's much greater than the actual number of deaths," he says.

"There's a big difference between an individual story of a young person who was healthy, got the flu and then died than at the end of the flu season someone saying 'Actually, X thousand people died from the flu."' Jhung says as of last week the U.S. had seen 2,622 hospitalizations. Of those, 61 per cent were in the 18-to-64 demographic. "When we think about who gets hospitalized for flu, it's usually 60 per cent of those hospitalizations are in people 65 or older."

In both Canada and the U.S., there are reports of really sick young and middle-aged adults in ICUs. That was the pattern during the H1N1 pandemic, so public health folks who know influenza aren't surprised. That's the way this virus rolls.

But it's not something the public – or even some doctors – expect from flu, Jhung says, admitting this could be making influenza more noticeable this year.

"I do get the sense – and this is not substantiated by any data – that clinicians are being maybe taken aback a little bit by the number of severe illnesses they're seeing in younger adults."

The perception something unusual is happening fuels demand for vaccine and supplies start to tighten. Suddenly that shot you didn't think you needed is something you desperately want, something you and your children need to be safe.

In 2004, the U.S. lost about 40 per cent of its vaccine order when one of its suppliers had to jettison its entire output because of a contamination problem. Word that supplies would be tight sent demand soaring. Americans were crossing the border to get a flu shot in Canada. Canada had plenty of vaccine that year, but media coverage of the U.S. shortage spiked demand here too.

And just as Canadian vaccination clinics were poised to open in the 2009 pandemic, a young boy died from the new flu in Ontario. Lines for vaccine were enormous.

"Every time a child or a youth dies, demand goes soaring up," says Kendall.

The frustrating thing for public health officials is that these periodic runs on flu vaccine do not seem to translate into long-term increases in demand for flu shots. It's quite probable that many of the people who lined up this week will not bother getting a flu shot next fall.

"It's a shame that this psychological effect also tends to wane over time," says Jhung.

"You would think that if they'd never been vaccinated, once they go through the process and recognize that it's really not that bad, that they may continue to do it. But I don't know what's going to make the message stick. We haven't figured that out yet." 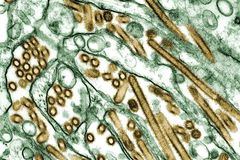 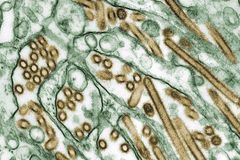 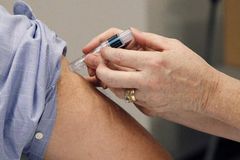 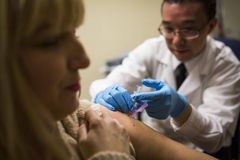 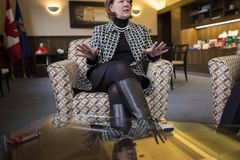 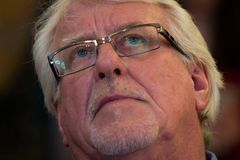