After Jeff Bird had a tumour the size of a fist removed from his colon, he faced a difficult decision: Should he suffer through chemotherapy he might not need, or forgo the toxic treatment and risk a return of his cancer?

Many early-stage cancer patients have little way of knowing how likely their cancer is to come back. But Mr. Bird, 48, managed to get free access to a $4,000 gene expression profiling test that analyzed a slice of his tumour and concluded his risk of recurrence was low, confirming his decision to say no to chemo.

The test that helped guide Mr. Bird's treatment, Oncotype DX, is new for colon and prostate cancers and is not yet covered by any Canadian province. A longer-established version for certain breast cancers is funded in six provinces, including Alberta and British Columbia, which added the test to their public health insurance plans just this spring.

The high price of gene expression profiling – and the uneven coverage for it across this country – point to the hard choices ahead for provincial health departments as personalized cancer medicine moves from dream to day-to-day reality in oncologists' offices and cancer clinics. Health officials always wrestle with what to pay for, but new assays that can tailor treatments for cancer, Canada's number one killer, are upping the ante.

"I think that this [Oncotype DX for breast cancer] is the first test and it won't be the last," said Stephen Chia, a medical oncologist and chair of the provincial breast tumour group at the B.C. Cancer Agency. "It is, in my view, quite a step forward in helping us to better select treatments that are individualized based on the profile of that individual's tumour."

Dr. Chia helped press B.C. to begin funding the Oncotype DX test for certain breast cancers. The test, conducted by a U.S. company called Genomic Health, Inc. at its lab in Redwood City, Calif., analyzes 21 genes in a tumour sample to determine whether the patient has a low, intermediate or high risk of recurrence within a decade, and whether he or she would benefit from chemotherapy.

In the case of breast cancer, the test is useful only for women with stage 1 or 2, hormone-receptor-positive cancer that has not spread to the lymph nodes.

But for those women, gene expression profiling can be key. Dr. Chia co-authored a study, published last year in the European Journal of Cancer, that found of 150 B.C. women provided the test, 30 per cent changed the course of their treatment after receiving their results.

B.C.'s funding decision is too fresh for hard figures on the public costs so far. Ontario, the first province to fund Oncotype DX for breast cancer, has spent nearly $24-million on the tests for 5,749 patients since 2010. Newfoundland has paid $175,350 for 42 tests since 2012. (The other provinces that fund it are Saskatchewan and Quebec.)

Some studies, including one by Dr. Chia, have found the breast-cancer version of the test cost-effective, in part because it leads some women to pass on expensive chemotherapy treatments.

Cancer Care Ontario, a provincial agency, estimated four cycles of chemotherapy for women with this type of breast cancer could cost up to $6,900, including supportive drugs.

A 2012 literature review by the Canadian Agency for Drugs and Technologies in Health, an independent, government-funded agency that advises governments on which medical advances to fund, found authors of about half the studies it looked at deemed the tests cost-effective.

Such calculations probably do not mean much to women agonizing over their treatment options.

Wendy MacGregor, a former lawyer who now works on community projects in Halifax, paid about $3,000 out of her own pocket in 2012 for an Oncotype DX test that predicted her cancer is unlikely to recur in the next 10 years. She had a recurrence score of just 11 on a scale of 100.

"It gave me huge piece of mind," she said. "It made me feel confident that my risk was as low as I could ever have imagined."

Nova Scotia, one of the four provinces that does not pay for Oncotype DX for breast cancer, is in the midst of reviewing whether to fund it.

There are complicating factors with the test. Tumours whose molecular makeup falls into the grey zone between low and high risk remain hard to predict. A large clinical trial is under way aimed at refining the intermediate scores.

Barriers to obtaining the test – including the paperwork patients and oncologists have to fill out for public coverage of the test in Ontario – along with its newness and media attention, have heightened its perceived importance for patients in their chemotherapy decisions, occasionally putting cancer doctors in a fix, according to a study published this week in the journal Current Oncology.

"It's had the unintentional consequence of making oncologists gatekeepers for determining when it is medically appropriate for a patient to have the test," said Yvonne Bombard, a genomics and policy researcher at St. Michael's Hospital in Toronto who interviewed 14 oncologists and 28 Ontario patients for the study. "But because perceptions of medical appropriateness can vary, that also led some patients to perceive that there are inequities in their access to the test."

All of this will play into what happens with the next-generation Oncotype DX tests for colon and prostate cancers, and with competing gene expression profiling tests that are already on the market in the United States.

When it comes to colon cancer, Mark Rother, an oncologist who specializes in gastrointestinal cancers at Trillium Health Partners in Mississauga, believes the test should be funded for the appropriate patients – in this case, patients with a specific type of stage 2A colon cancer.

"If I had stage 2A colon cancer and knew that I could pay $3,000 or my wife or family could … I for sure would recommend having it," he said. "It's not an absolute. It's another piece of information to make the right decision."

Dr. Rother was one of the first doctors in Canada to be provided free access to Oncotype DX for colon cancer for 10 patients, part of Genomic Health's initial efforts to bring the test north of the border.

The same program helped Mr. Bird, a Toronto sports physiotherapist, obtain the test free. He would like to see more people have access to it.

"Obviously," he said, "it would help a lot of people if it was [covered,] in terms of their peace of mind."

new
Rate of strokes among younger people on the rise, report says
June 5, 2014 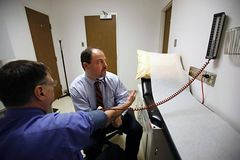