The life-expectancy gap between men and women is quickly closing in Canada, but not everyone is benefiting equally from the changes, a new study reveals.

Low-income Canadians are dying sooner than their peers with higher incomes, according to a new study published Monday in the journal BMJ Open. The trend is most pronounced among high-income men, who are now living longer than low-income women.

In the study, Rosella and her colleagues used data from Ontario's population-based death registry to analyze every death in the province from 1992 to 2012 – more than 1.7 million deaths in total. They found that over the 20-year period, mortality rates for men and women dropped 39.2 and 29.8 per cent, respectively, meaning both sexes are living longer overall. But from 2000 on, the biggest life-expectancy gains were experienced by men. And in particular, high-income men began to outlive low-income women.

Part of the reason men are faring better is that for decades they lagged behind women in overall life expectancy. Rosella said a combination of factors, such as greater awareness and prevention of cardiovascular disease among men, has helped them catch up and live longer. She expects that at some point soon, life expectancy for men and women will be equal overall.

What's troubling is that income levels are associated with how long people will live, a major societal problem that has no easy solutions. During the 20-year study period, mortality rates from all causes were, on average, 28-per-cent higher among men in the lowest income group compared with the highest. Low-income women had 24-per-cent higher mortality rates than their peers in the highest income group. The biggest disparity was seen in low-income women, who died sooner than high-income men.

"It's stunning," said Dr. Elaine Power, assistant professor in the school of kinesiology and health studies at Queen's University in Kingston, who was not involved with the study. "The changes are pretty dramatic in a 20-year period. It is very concerning."

Public-health officials have been wrestling for years with the fact that a person's income, education level and geographical address can dramatically impact his or her long-term health. But this study provides some of the most comprehensive black-and-white data showing that some segments of society are benefiting from life-expectancy gains while others are being left behind.

While researchers don't have a full understanding of why income and other factors tied to socioeconomic status can greatly affect a person's long-term health, they do know the relationship is complicated. While some research does indicate that lower-income people or those living in rural areas may, for instance, use tobacco more than their higher-income peers, the differences in life expectancy go far beyond controllable lifestyle factors. As Power points out, study after study shows that higher-income individuals tend to have better health than lower-income counterparts, even if those higher-income individuals have stressful jobs or use tobacco.

The difference, she said, has something to do with society's hierarchy: The higher you are, the better your health.

Rosella said a number of factors are likely involved, such as the fact that lower-income individuals may be less able to navigate the complexities of the health-care system. But she suspects the biggest issue is the toll their lives take.

"I think there is a bit of trauma that comes into being in that lifestyle and having to bear the stress of being in that deprived lifestyle," she said.

Power agreed, saying that more research is emerging that shows that lower-socioeconomic-status individuals can experience hormonal stress response and other physiological changes as a result of their environment and circumstances.

"It's about the structure of the organization of our society," she said.

Why some doctors may seem to know very little about assisted death
October 21, 2016 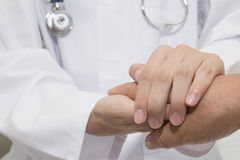