Though it may sound like one, this is no joke: Two miniature horses trotted into a hospital.

Doctors and patients did double-takes when the equine visitors ambled down long corridors in the pediatric unit at Chicago's Rush University Medical Center. Wide-eyed youngsters hooked up to IV poles stepped into hallways to get a glimpse, and kids too sick to leave their rooms beamed with delight when the little long-lashed horses showed up for some bedside nuzzling.

Mystery and Lunar, small as big dogs, are equines on a medical mission to offer comfort and distraction therapy for ailing patients. It is a role often taken on by dogs in health-care settings – animal therapy, according to studies and anecdotal reports, may benefit health, perhaps even speeding healing and recovery.

Mini-horses add an extra element of delight – many kids don't know they exist outside of fairy tales.

These horses and two others belong to the animal-assisted therapy group Mane in Heaven, based in Lake in the Hills, a suburb northwest of Chicago. They have visited nursing homes and centres for the disabled, but this November visit was their first-ever inside a hospital. It was also the first horse-therapy visit for Rush, and more are planned.

"We have long had animal-assisted therapy here at Rush and just seen the enormous benefits that animals can have on most children – just the joy that they bring, the unconditional love," said Robyn Hart, the hospital's director of child life services.

Mini horses "are something that most people, whether kids or adults, have never seen before, and so that builds in a little more excitement and anticipation. They almost look like mythical animals, like they should have wings on," Hart said.

Some people confuse these horses with better-known Shetland ponies, but minis are less stout, with a more horse-like build. The therapy they offer contrasts starkly with the austere high-tech hospital environment – soft ears to scratch, fluffy manes to caress, big soulful eyes to stare deeply into.

"They're so nice and they don't judge and they're so sweet," said epilepsy patient Emily Pietsch, 17, after gently tracing Lunar's heart-shaped muzzle with her fingers.

Some research has suggested that animal-assisted therapy may reduce pain and blood pressure, and decrease fear and stress in hospitalized children. But much of it is based on patients' reports.

A review of 10 years of studies about in-patient therapy using dogs, published in April in the Southern Medical Association's journal, concluded that it's safe and can be effective. Dr. Caroline Burton of Mayo Clinic in Jacksonville, Fla., a co-author of the review, owns seven dogs, four regular horses and a donkey, and strongly supports animal-assisted therapy.

Burton acknowledged that skeptics dismiss it as "touchy-feely" and lacking hard evidence of any meaningful medical benefits. She said studies are needed on whether animals in hospitals can shorten patients' stays and reduce readmission rates – something her hospital is looking into with dogs and heart-failure patients.

While some worry about animals bringing germs into hospitals, Burton's review found no associated infections in patients.

Guidelines from the U.S. Centers for Disease Control and Prevention note that animal-assisted therapy in health-care settings stems from evidence that having pets at home helps some patients recover more quickly from medical procedures. The guidelines focus mostly on infection-control procedures and hand-washing for patients and hospital staff.

Diegel and her horse helpers carry lots of hand sanitizer and a pooper scooper on therapy visits. Diegel doesn't feed the horses beforehand, to help avoid accidents. Even so, one of the horses pooped in a hallway during the Chicago hospital visit, but the volunteers cleaned up in a flash and no one seemed fazed.

The horses were "a smashing success," Hart said. "We're looking forward to having them visit monthly."

A Canadian first: Therapy dog allowed to comfort children at sex-abuse trial
May 12, 2018 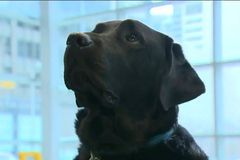 Weighted blankets give autistic people the warm fuzzies
May 12, 2018 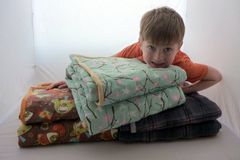 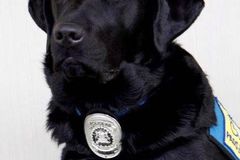 Coffee and kittens: Cat cafe in Montreal claims to be North America’s first
May 12, 2018 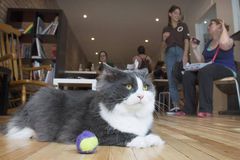