My turning point: Throughout most of my 20s, I'd lost and gained weight – going all out or not at all. I'd work out like a fiend, count calories all the time, and was really hard on myself when I fell off the wagon – which, of course, was inevitable. In September of last year, I was out for a walk with my dog and couldn't make it up a small hill without breathing heavily. I came home and stepped on the scale: I hadn't weighed myself in years. Seeing the number 268 flash in front of me was the reality check I needed.

My method: I started a food diary of everything I was eating – this really helped me be aware of what I was putting into my body. I was shocked by how much mindless snacking and tasting during meal prep I was doing, and the amount of fast food I was eating, when I saw it all on paper.

The next step was focusing on portion control. From reviewing my food diary I learned I was eating four times the suggested serving of grains at one meal (e.g. two cups of cooked pasta with cream sauce, and two white dinner rolls with butter, and not a vegetable in sight). I cut out diet pop and switched from eating refined, simple carbs to complex ones. Menu planning has been key to my success; I do as much meal preparation as possible on weekends to ensure the fridge is filled with healthy ready-to-go options.

Now, my dinner is typically one serving of lean protein and as many veggies as I want. I limit my complex carb intake to breakfast (usually homemade oatmeal or muesli), and then have a large salad with protein (such as tuna or roasted chickpeas) for lunch and a boiled egg mashed on a rice cake for my preworkout snack.

I started off very slowly in the exercise department; I was out of shape and didn't want to injure myself. In December, 2012, I joined a plus-size fitness studio called Fit Zone Plus, where I did a Zumba class twice a week. I then joined their 12-week Mind Body Makeover program in February, 2013; it combined lessons and strategies about health and well-being and included a group exercise class at each session. I also made small changes, like walking to the TTC (instead of waiting for the streetcar), taking the stairs at work (instead of the elevator) and walking on my lunch break.

I started to feel more confident and eventually joined an outdoor boot camp. It was tough, and I wanted to quit after the first class – I was panting and puffing. Though I had to take frequent breaks, I persevered – I had a lot of support and encouragement from the other members of the group, who kept me motivated and kept pushing me to be faster and stronger. This summer, I increased the number of sessions of boot camp to four or five a week, and now I'm at the head of the pack, cheering on and supporting the new recruits.

My kryptonite: Chocolate. More specifically, dark chocolate with acai and blueberry. I count out 15 squares and make a cup of my favourite tea (peppermint) and eat them while watching Thursday-night TV. I've been told that I make an "mmmmm" sound while eating my hard-earned treat.

Tell us how you lost it: tgam.ca/weightloss

How I lost 70 pounds: It was time to take responsibility for myself
October 17, 2013 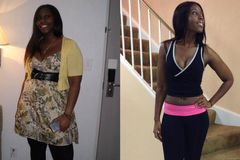 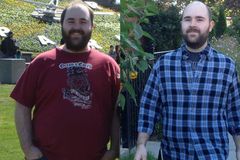