My turning point: There were many instances that should've been light-bulb moments: When I found out I was hypertensive and diabetic, or when my dad (also an overweight smoker) had a stroke. I had told myself for years I needed to lose weight and quit smoking, but that was always going to be future Adam's problem. On Feb. 26, 2012, I was 32 years old and 398 pounds. I didn't want to hit 400 pounds, and something just clicked: I knew I had to change something, so I changed everything. I didn't tell anyone – this was between me, and future me.

My method: On that day, I dumped out my Coke bottles – I used to drink at least two litres a day – and smoked my last cigarette. Every time I had a craving, I went for a walk. The cravings at first were frequent – I was a pack-a-day guy for 18 years – so I was logging about four kilometres a day in walks! I easily dropped 10 pounds. But I remember asking myself: 'Is 388 really any better than 398?'

At the same time, I reformed my diet: I gave up the daily trips to the drive-thru (McDonald's breakfast used to be a staple) and said goodbye to anything prepackaged. I began weighing everything I ate – I still do this for everything I eat – and limiting myself to the food I needed to be healthy, not the food I wanted. I told myself food is a fuel, not a hobby. Three months later, I was down to 350 pounds At that point, I started running. Or, I should say, started to start running. What began with 30 second intervals for 10 minutes became 20-plus minutes runs. Four months after that, I was down to 298 pounds and still going strong.

The pace of loss has slowed down thanks to a couple of road trips and the holidays, but as we near the end of my 13th month, I'm at 248 pounds (down 150 pounds from my starting weight), no longer on any blood pressure or cholesterol medication, and my diabetic medication has been reduced to one-quarter of what it was. I haven't had a cigarette since Feb. 26, 2012 and I am now up to a 10 kilometre run every Saturday.

I hope to reach my goal weight of 225 pounds by late spring. This week, as I was on my weekly 10K run, I thought about myself a year ago. The idea of running back then would've been laughable. Today, it sure isn't easy, but I'm proud to say 'future Adam' finally arrived.

My kryptonite: Early on, every Sunday was a 'free day.' This meant a trip to Burger King for a whopper and onion rings. But then it seemed foolish: I was crushing it all week, losing four or five pounds, so I didn't want to throw that work away. I'm still less strict on Sundays, but now it's a homemade, lean chicken burger with oven baked, low-sodium french fries.

Tell us how you lost it: tgam.ca/weightloss 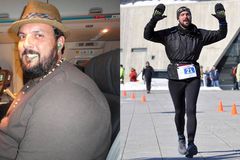 How I lost 116 pounds: 90 minutes of exercise, seven days a week, wasn't enough 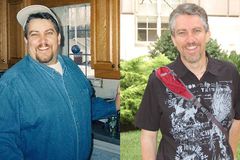 How I lost 180 pounds: I started a Facebook page 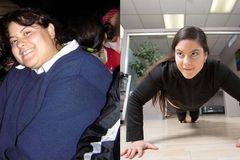