Anthony Vo, a second-year medical student at the University of Ottawa, says he logs up to three hours of studying for every hour his classmates hit the books. But it's not because he is a keener.

Vo, 22, has learning disabilities. Compared to most adults, Vo has trouble memorizing facts and gaining information through listening, language and reading. Being in an environment that taxes the learning capacity of the highest of achievers "kind of puts me at a disadvantage," he says.

But Vo says he hopes to become a surgeon, even if it means working extra hard because of his learning disabilities.

"It doesn't come down to how gifted you are or how smart you are," he says, "but how much you want to get to where you want to go."

According to Statistics Canada, more than 3 per cent of Canadian children have a learning disability – the equivalent of one child in every school bus full of kids.

Learning disabilities is an umbrella term for a variety of disorders that may affect a person's ability to listen, speak, read, write, understand math problems and retain information.

A student with learning disabilities may be of above-average intelligence but still struggle to keep up with other kids, notes the Learning Disabilities Association of Canada.

Learning disabilities may range from mild to severe. Nevertheless, with the right kind of support, children can find ways to cope with their challenges, graduate from school and land a good job, says Nancy Perry, an associate professor of special education at the University of British Columbia.

She mentions a former student with a learning disability who works as a financial planner at a national bank. Although med school is less common, she adds, "it is possible to be quite successful."

People with learning disabilities are more likely to thrive if they have ongoing support, Perry says. While early intervention is "absolutely necessary," she says, "we need to take a lifespan view of learning disabilities." Children who struggle with reading, writing and math may need intensive one-to-one teaching or support in small groups. But since they will spend most of their lives in the general population, they also need help in developing strategies to function in the mainstream, she says.

Perry notes that researchers have identified six characteristics that distinguish people with learning disabilities who succeed from those who remain dependent throughout their lives. Many can be acquired in childhood, she adds.

According to a 20-year study published in the journal Learning Disabilities Research and Practice in 2003, the six factors include the ability to anticipate difficulties and respond with positive action, and the skills to set realistic goals and reach them step by step.

Successful individuals with learning disabilities not only refuse to give up but also know when to change gears when a strategy isn't working. They find ways to cope with stress, such as planning ahead for tough situations, and eventually develop reciprocal relationships with family members and others who have offered support. Finally, they are able to see learning disabilities as just one aspect of themselves, researchers found.

Vo hasn't let his challenges overshadow his strengths. He is a good fit for the specialty of surgery, he says, because "I've been really good with motor skills and learning in a visual environment."

Diagnosed with learning disabilities in grade 3, Vo spent much of grade school in ESL programs (although English is his first language) and received extra support in class through an individual education plan created by his disability adviser, teachers and parents.

By the end of high school, Vo was getting As in math and science and Cs in subjects such as French. But his high marks were due to a study-till-midnight routine, he says.

It wasn't until Vo entered the University of Ontario Institute of Technology in Oshawa that he began to accept the accommodations now offered by many postsecondary institutions to students with learning disabilities, including funding for tutors and extra time to write tests.

Before then, he recalls, "I was sort of in denial. I didn't really want to be identified as having a learning disability."

Throughout his school years, his mom worked hard to connect him with support services and urged him to accept his disorder, he adds. "If it weren't for my mom, I probably wouldn't have gotten where I am today."

Since his acceptance into medical school – which he attributes in part to his status as a student with disabilities – Vo has continued to accept extra time for certain tests. He breaks his studying into four-hour chunks and memorizes strings of facts by relating them to a specific illness or procedure.

Developing one's own tools in the learning process is especially important for students with learning disabilities, says Perry, who has researched an approach known as self-regulated learning.

With coaching from teachers and parents, she says, any child can discover what their strengths are and "what strategies they can use to help themselves to cope."

So far in medical school, Vo has passed all his tests.

The ultimate goal, he says, is to "take care of patients the best I can."

Resources for parents and students

Parents can help children develop the characteristics shared by learning-disabled people who succeed in graduating from school, finding employment and maintaining healthy relationships, says Nancy Perry, an associate professor in special education at the University of B.C.

Here's where to get started:

Popular learning-disabilities program may get a second life
March 3, 2011 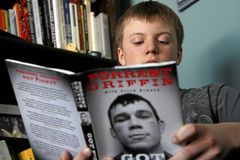