Oliver Sacks once had a conversation with a spider whose voice reminded him of British philosopher Bertrand Russell.

If you're going to write a book about figments of the imagination, it seems only sporting to include your own. That's exactly what Dr. Sacks, the acclaimed author and neurologist, does in his latest volume, Hallucinations.

It doesn't take much for humans to see, hear or smell things that aren't there, it seems. We hallucinate when deprived of sensory input, when we suffer injuries or illness, when we fall asleep, when we wake up – and, of course, when under the influence of mind-altering substances, as Dr. Sacks was when he met the philosopher-spider.

Now 79, he has decided that enough time has passed for him to reveal his personal experiments with drugs as a young man, experiments driven by a mischievous curiosity and periods of melancholy he was having.

He describes what he learned from his hallucinations – and why having a vision or hearing voices may seem like precursors to madness but are really an essential part of what it means to be human.

Your latest book presents a startling array of imagined phenomena. Since the U.S. election just took place, I have to ask: Have you ever come across anyone who had a hallucination involving a political figure?

I do relate a case of a woman who had one of these ecstatic seizures in which she was told by God to run for Congress. She ran as a Republican and she told everyone she was doing this at God's request. This was a strong Democratic constituency, and she almost unseated [the incumbent]. But that's as close as I ever get to politics.

Politics and religion – both areas to be careful.

Yes, politics, religion and sex. They're the three danger areas.

But apparently not drugs

Why did you decide to include your own experiences with drug-induced hallucinations?

I was actually in hospital with a broken hip last year and rather bored and irritable. I couldn't get comfortable. A friend of mine dropped by and said, "You've sometimes mentioned episodes in the sixties; can you tell me more?" And I said, "Well, o-kay."

He pulled out a little pad like yours, so I think he had, in a way, set me up for this. I thought, "Well, it was 45 years ago. I'm in my 80th year. Why shouldn't I say a few things?" But more important, hallucinations can only be described in first-person terms, and I was the person there.

You describe a revelatory experience after taking a large dose of amphetamines when you had a sudden insight into your life's calling. Could that have happened some other way?

It probably would have happened anyway. Though I went through university and medical school and this and that, I never really quite felt intellectually alive.

I only started to come to life when I started seeing patients, describing patients, taking responsibility for them and entering their lives. I think this would have got me going anyhow, but it was made more sudden and dramatic by [the drug use].

I've really not had the impulse to take that again. And I was very lucky to survive. Big doses of amphetamines are much worse than heroin or cocaine or acid or mescaline. You shoot up your blood pressure and your pulse, and it's very easy to die.

One of your goals is to reduce the stigma surrounding hallucinations. Why?

I've seen so many people who have suffered from what they feel is a shameful secret and experiences which they feel may give them dreadful forebodings of madness or dementia – and who turn out, for example, to have this Charles Bonnet syndrome [a partial loss of hearing or vision that leads to hallucinations].

It's an immense relief to be able to bring something out and have it discussed, especially if it's sort of benign and self-limiting. To be told, as it were, it's okay to hallucinate.

When hallucinations are related to sensory deprivation, is it because the brain is making up for a lack of stimulation?

Seemingly. Incidentally, a lot of the deprivation stuff started in Canada, at McGill under [psychologist] Donald Hebb. It was provoked by mysterious accidents which aviators had when flying alone in a wide blue sky with nothing to see.

Things like this get to one fairly quickly. If one wears a blindfold but isn't restricted in any other way, people start hallucinating in two days or so. Visual processing occupies half the brain and it's always active. If it's not getting anything from the outside to process, it will find stuff inside. It will mine memory and imagination, but nothing which comes out is actually recognizable.

What about hallucinations that lead to religious conversions?

I feel my function is to say that some religious experiences go along with unusual, exceptional states of the brain. But this can tell us nothing about their value or meaning or significance, to the individual or the culture. It's not my business to comment on that, but it is my business to remark on how commonly certain temporal-lobe seizures may be associated with mystical or religious feeling, or the reverse.

I'm infuriated and also amused by this book: Proof of Heaven: A Neurosurgeon's Journey Into the Afterlife.

He [author Eben Alexander] very nearly died. When he came to, he had had very elaborate visions, where he seemed to be moving along a tunnel toward some bright light. Usually in near-death visions, the bright light is imagined as the boundary between life and death, and people bounce back.

But he went on through the bright light into a lovely pastoral place with birds and flowers which he realized was heaven. So he is a changed man, and I'm afraid his book is a bestseller because he is saying what everyone wants to know: We have an afterlife and it can be great.

Let me put it this way: What he is describing is a hallucination. It's what in the 19th century would be called a "veridical" hallucination – a truth-telling hallucination. But hallucinations aren't evidence of anything except the brain's capacity to produce them, which is very remarkable.

You describe a moment in your book when, in the throes of withdrawal from a sedative called chloral hydrate, you were beset by terrifying hallucinations. So you sat down with a notebook to literally "write for dear life." How long have you had that impulse to write?

From about [the age of] 14. I've had this feeling that I can't understand or come to terms with things unless I write about them. Someone did some archiving 10 years ago and they said I had some 640 notebooks.

It was very special with the chloral delirium, in the sense I felt, I have to write for my life. But also, I love writing.

I once had something much more painful than a broken hip, I had a spinal operation and I was really in agony. All I can say about writing is that it's better than morphine.

Really? And you know what you're talking about.

[Laughs] I know what I'm talking about. 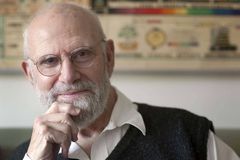 The Atmosphere of Heaven: The Unnatural Experiments of Dr Beddoes and His Sons of Genius, by Mike Jay
August 21, 2009
Follow Joanna Slater on Twitter @jslaternyc
Report an error Editorial code of conduct
Due to technical reasons, we have temporarily removed commenting from our articles. We hope to have this fixed soon. Thank you for your patience. If you are looking to give feedback on our new site, please send it along to feedback@globeandmail.com. If you want to write a letter to the editor, please forward to letters@globeandmail.com.
Comments