When Jennifer Longley's mother passed away six years ago at age 86, one of the first calls she had the hospital make wasn't to a funeral home but to Dalhousie University.

Her mother, Doris Palmer, had arranged many years before to will her remains to the Halifax school's Human Body Donation Program to aid in the training of future doctors, dentists and other health professionals.

"Those were my mother's wishes, that her body go there," says Longley, who lives in Nova Scotia's Annapolis Valley. "My mother was a very caring person. And because of her caring nature, I think this was just a natural thing for her to make one last gift to society of her body."

Bequeathing one's remains for the benefit of others is one of the most unselfish gifts a person can bestow, says Brenda Armstrong, co-ordinator of the Dalhousie program, which receives about 120 donated bodies each year from Nova Scotia, New Brunswick and P.E.I. (Residents of Newfoundland and Labrador can donate to Memorial University in St. John's.)

Donors can also choose to will their brains for research to the Maritime Brain Tissue Bank housed at Dalhousie, one of several such university-based banks in Canada.

As awareness of this after-death option grows – university medical schools across the country have similar programs – more Canadians are considering donation, says Armstrong, who gets up to a dozen inquiries a week and has consent forms from 60,000 to 70,000 potential donors on file.

"The majority of people I talk to, it's about helping others and giving back," she says.

"They feel that their body, once they're gone, the body's just a shell … During their lifetime, individuals may have had heart surgery, hip surgery, knee surgery. They have an extensive medical history and they'll say: 'If I can give back to the health profession that helped me, then that is a great thing.'"

It's critical the donor designate a close relative or executor to fulfill their wishes after death, Armstrong says, and the decision should be discussed with immediate family ahead of time "so there are no surprises."

The program pays the cost of transport, preservation and cremation of the remains, which are kept for one to three years.

Not all bodies intended for donation are accepted. Reasons for refusal mainly centre around the ability to preserve the remains, she says.

Major traumatic injury or burns, a ruptured aortic aneurysm, unhealed incisions from a recent surgery or the presence of certain infections, such as HIV or hepatitis B, are all reasons for non-acceptance, as is severe emaciation as a result of cancer, for example, or extreme obesity.

The University of Toronto's body donation program has similar requirements for the roughly 200 cadavers it accepts each year. Most are used to teach medical, dental and rehabilitative undergraduates the fine points of anatomy in the dissection lab, although some are designated for training physicians at the school's surgical skills centre.

"Anatomy is the foundational subject to any of the health professions," says Dr. Mike Wiley, an anatomy instructor who encourages his often initially nervous first-year students not to shy away from the dissection process because that would mean not honouring the donor's intent.

"I tell my class at the beginning of the year that these are very, very special people who would give this gift to somebody that they've never met so that that person could become a better caregiver to look after people that the donor will never meet," he says.

Students are also told that respect for the deceased is paramount.

"The cadaver is never to be the object of a joke," Wiley stresses. "I remind the class that this cadaver is their very first patient and it's their most vulnerable patient because the only person who can look after them is the student."

Katie Mattina, who just completed her first year of medical school at the University of Toronto, says it's a "huge privilege" to be able to learn about anatomy, not just through textbooks or online, but with the flesh and blood and bone of the human body.

"It's hard to understand a disease if you don't know where it is in the body and you haven't seen it with your own eyes," the 23-year-old says.

Each June, the university holds a memorial service to recognize the donors, whose cremated remains are given to the family, if they so choose, or interred at St. James' Cemetery in the city's downtown.

"It's a means of creating closure both for the families and for the students and the faculty," Wiley says.

"The students play a very big role in the service. They provide music. The last couple of years they've put together choirs. Part of the service involves [students] reading out the names of the donors that are being honoured."

Dalhousie also holds annual services – an interment at the Memorial Gardens in Halifax and a non-denominational memorial at Saint Benedict Parish church, which will bring together 600 to 700 people, including donors' loved ones, the dean of medicine and other university officials, and students.

At this year's gathering on Friday, students representing the medical, dental and occupational therapy faculties will each give eulogies to the 130 donors on behalf of their classmates.

"That part of the service is very important," says Armstrong. "The students are the direct beneficiaries and so they're thanking the families and friends.

Longley says a family memorial was held for her mother soon after her death in Fredericton where she lived, but attending the Dalhousie service when her mother's remains were released more than three years later still felt special.

"I was very pleased I could be there," she says. "I felt pride that my mother had chosen to do this with her body." 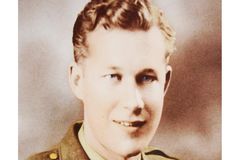 Dissection debate: Why are medical schools cutting back on cadavers?
May 12, 2018 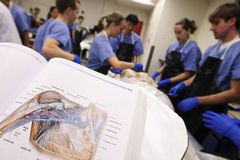 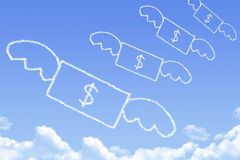