After he lied about running a marathon in under three hours when it took him more than four, the world knows that Republican vice-presidential hopeful Paul Ryan is a lean, mean, fibbing machine – and now we know exactly how lean.

Ryan, who is a devotee of the P90X workout routine and looks to have a flat stomach under those golf shirts he likes to wear, has boasted that he keeps his body fat levels at between six and eight per cent. The claim has gone unchallenged since it first appeared in a Politico interview in 2010. But, in light of his tall tales, it is now coming under scrutiny, with Slate saying at best Ryan is "wildly exaggerating."

Yes, the Wisconsin congressman seems to hate fat like Ayn Rand hates handouts to the poor, but is it really likely his body-fat levels are that low?

"The leanest I've ever seen, I measured Herschel Walker when he was a Philadelphia Eagle," Andersen says of the former NFL great.

"He was about 4 per cent, and he just looked like a chiselled Greek god."

The leanest varsity football player at McGill – a young man who spends three or more hours in the gym every day – has about 8 per cent body fat, Andersen says.

That's the same amount American swimmer Michael Phelps had when he won eight gold medals at the Beijing Olympics.

Andersen estimates that Ryan is probably between 10- and 12-per-cent body fat, which is still "really great."

Anyone with a body-fat percentage as low as six would have washboard abs and bulging veins, says Brendan Fox, head fitness trainer at Medcan Clinic, a private health-care clinic in Toronto.

There are several common ways to measure body fat, but it can be easy to manipulate the results, Fox says. "It's not hard to cheat on fat tests."

Bioelectrical impedance, available through many health clubs, sends a current through the body. It has an eight-per-cent margin of error, Fox says. (The test can be thrown by factors such as skin temperature, hydration levels and how much food you have in your belly).

Calipers, which measure the thickness of a skin fold at several sites on the body, can be highly reliable but results can be inaccurate because of human error. As a minimum standard of reliability, the person doing the measuring should have administered at least 500 caliper tests, Fox says.

Hydrostatic weighing can be reliable but is hardly practical for most people. Essentially, you are dunked under water to determine your body's density, and from that measurement body fat percentage is calculated.

The most reliable way to measure body fat is something called the Bod Pod, Fox says. "It looks like the space egg from Mork & Mindy."

A person sits in the chamber and their body fat percentage is determined by air displacement technology. Even that test isn't perfect though. Fox points out that body hair can affect the results by also displacing air.

Even if body fat could be measured perfectly, there is a growing body of evidence that suggests it might not be that important a statistic when it comes to determining a person's overall health, says Jamie Burr, an associate professor in the department of applied human sciences at the University of Prince Edward Island in Charlottetown. It's possible for someone to have low body fat but not be fit.

Still, A-types like Ryan will probably always want to quantify their achievements. And sometimes they might even exaggerate them.

If he is fibbing, it's not as if he's the only one. Spend enough time in the gym and you'll hear more than your share of boasts.

"People lie about these things all the time," Fox says. 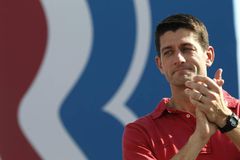 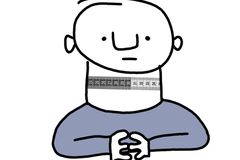