But what Brinkman doesn't understand is why her daughter is able to get the vaccine free of charge while her 12-year-old son is not. Like every other province, British Columbia offers the HPV vaccine to all girls for free and they are typically administered during elementary school. But there is no similar B.C. program for boys. New evidence and public pressure has some provinces, such as Ontario, considering whether to extend the program.

Rather than wait for policy-makers to make up their minds, a growing number of parents, such as Brinkman, are taking matters into their own hands.

"I'm paying this money because I know it's important to protect him," Brinkman said. "What's most dismaying is really $340 is cost-prohibitive for most people."

HPV is a sexually transmitted infection that affects up to 75 per cent of sexually active people. The vaccine offers protection against common forms of the virus that can lead to cancer. Currently, only Alberta and Prince Edward Island cover the cost of HPV vaccines for boys, while Nova Scotia will launch its universal program this fall. B.C. announced earlier this summer it would provide free HPV vaccines to "vulnerable" and "higher risk" boys, such as those who are gay or who live on the street, a decision some medical experts have described as unfair and discriminatory.

Dr. Jennifer Blake, CEO of the Society of Obstetricians and Gynaecologists of Canada, said the reason the vaccine is framed in terms of gender is the fact that it is best known for protecting women against cervical cancer. But many men are also affected by cancers caused by HPV and, from a public-health standpoint, it doesn't make sense to leave half of the population out of this vaccination program, she said. For starters, not all girls get vaccinated against HPV. In Ontario, reports show that only about 70 per cent of eligible girls receive the vaccine, which could put their future unvaccinated partners at risk.

When asked why universal coverage isn't available for boys, Shae Greenfield, a spokesperson for Ontario Health Minister Eric Hoskins, wrote in an e-mail the province is "currently reviewing" HPV coverage "to determine whether additional changes are required."

Cost is one of the big reasons the HPV vaccine isn't already universally covered by all provinces.

B.C. provincial health officer Dr. Perry Kendall said that after studying the cost and the potential benefit down the road, officials decided to only offer the vaccine to boys or young men who self-identify as those who will have sex with men or live on the street.

Blake said that system is unlikely to work because of the challenges of getting those individuals to identify themselves and seek out vaccination.

But Kendall argues it's better than what most provinces are doing.

"Is it more unfair to withhold the vaccine from all boys … or is it less unfair to offer it to those at highest risk?" he said. "There's no question that if the vaccine was cheap and affordable … we would reconsider the option."

A study published in April, however, challenges the idea that HPV vaccines are too cost-prohibitive to make available universally. Toronto researchers created a comprehensive model that found including boys in public HPV vaccination programs could save the health-care system between $8-million and $28-million in their lifetimes.

Dr. Lillian Siu, senior medical oncologist at the Princess Margaret Cancer Centre and study author, said the results are compelling and should put an end to the idea the HPV vaccine is for girls only.

"There are so few cancers that we can actually prevent," she said. "It seems like the right thing to do. I don't even need to be an oncologist to think that way."

Numerous groups, including the National Advisory Committee on Immunization and the Canadian Medical Association, have called for universal coverage of the vaccine for boys.

In a report released earlier this year by the Cancer Advocacy Coalition of Canada, Ottawa pharmacist Jaime McDonald criticized the fact that a gender-based debate about sexuality is driving policy decisions.

"Public funding for vaccination against a sexually transmitted infection is subject to considerable public debate and opinion, much like other 'lifestyle' illnesses such as smoking and drug abuse," she wrote.

A 2013 study in the journal Current Oncology found that throat cancer linked to HPV infection rose from 25 per cent of cases from 1993-1999 to 62 per cent from 2006-2011. While cervical cancer still remains the best-known disease associated with HPV, the rising incidence of throat cancer demonstrates the need to increase access to the vaccine, said Dr. Robert Nuttall, assistant director of cancer control policy at the Canadian Cancer Society.

Angela Pollak, who lives in Kitchener, Ont., heard about the vaccine when a letter went out to her son's class informing parents about the female vaccination program. She decided to wait and see whether the province would extend coverage to her son. Several years later, however, nothing had changed, so she decided to purchase the vaccine for her now-16-year-old son. Pollak explained she did it because she wants to make sure he is protected and she doesn't buy the idea that vaccinating girls is enough to ensure herd immunity.

"Having only one partner covered, you're leaving a good chance as to whether that person is actually covered or not," Pollak said. "In my mind, there's no down side to doing this." 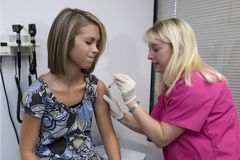 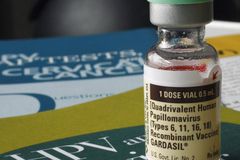