I want to improve my diet. How should I cook vegetables to keep their vitamins?

It's almost salad season, and this year I have vowed to improve my diet by eating far more vegetables in a variety of salads. But I'd like a variety of raw and roasted or otherwise cooked vegetables for a mix of textures and flavours. Are raw vegetables always healthier? Do all cooking methods destroy vitamins? What is the best way to cook vegetables to maximize their nutritional value?

Steam, don’t boil: To get the maximum nutritional benefits, you need to cook vegetables correctly

“Eat more vegetables” is long-standing advice for a healthy diet – and for good reason. A diet high in vegetables has been tied to a lower risk of high blood pressure, heart attack, stroke, cataracts, macular degeneration, cognitive decline and digestive-tract cancers. Thanks to their protective mix of vitamins, minerals, fibre and phytochemicals, vegetables are thought to help dampen inflammation, fend off harmful free radicals and boost immunity.

To reap their maximum nutritional benefits, though, you need to cook them right.

While all cooking methods alter the nutrient composition of vegetables (and fruits), some destroy particular nutrients while others actually enhance nutrient content.

Vitamin C and many of the B vitamins are the most unstable nutrients when it comes to cooking. Because they're water-soluble, they leach out of vegetables into the cooking water. If you boil your vegetables or microwave using too much water, you'll end up with less thiamine, folate, vitamin B6, vitamin B12 and a lot less vitamin C.

According to a review by researchers at the University of California, Davis, as much as 55 per cent of the vitamin C in vegetables is lost during home cooking (compared with raw). Vitamin C is also easily degraded by heat.

Polyphenols – phytochemicals plentiful in kale, spinach and broccoli – are also susceptible to degradation during cooking.

Fat-soluble nutrients such as vitamins A, E and K are more stable and fare better during cooking. So do carotenoids (e.g., beta-carotene, alpha-carotene, lycopene, lutein), antioxidants found in leafy greens, carrots, winter squash, sweet potato and, in the case of lycopene, tomatoes.

Water is the enemy when it comes to nutrient losses during cooking. That's why steaming is one of the best methods to preserve easily damaged nutrients, such as vitamin C and many B vitamins. Since vegetables don't come in contact with cooking water during steaming, more vitamins are retained.

Dry cooking methods such as grilling, roasting and stir-frying also retain a greater amount of nutrients than boiling. If you prefer to boil your vegetables, save the nutrient-rich cooking water to add to soups and sauces.

Contrary to popular belief, microwaving does not kill nutrients in vegetables. In fact, it may outrank steaming when it comes to retaining antioxidants.

Cornell researchers found that spinach retained nearly all of its folate when microwaved but lost most of the B vitamin when boiled on the stove.

Microwave ovens use less heat than many other cooking methods and involve shorter cooking times. If you use a minimal amount of water and don't overcook your vegetables, microwave cooking is a nutritional win. (A 2003 study concluded that microwaving destroyed most of the antioxidants in broccoli – but the researchers had added far too much water.)

Are raw vegetables healthier than cooked?

Many people think raw vegetables are more nutritious than cooked, but that's not the case. Cooking vegetables breaks down the plants' cell walls, releasing more of the nutrients bound to those cell walls. Cooked vegetables supply more antioxidants, including beta-carotene, lutein and lycopene, than they do when raw.

Cooked vegetables also deliver more minerals. Spinach, beet greens and Swiss chard are high in calcium, but a compound called oxalic acid binds with calcium. Heating releases bound calcium, making more of the mineral available for the body to absorb. Cooking vegetables also increases the amount of magnesium and iron that are available to the body.

Even so, in some cases vegetables may be better for you raw than cooked. Cruciferous vegetables – cabbage, cauliflower, broccoli, bok choy, Brussels sprouts – contain an enzyme called myrosinase, which, when you chop or chew these vegetables, converts glucosinolates (phytochemicals) to anti-cancer compounds called isothiocyanates.

The problem: Myrosinase is easily destroyed by heat. Cooking cruciferous vegetables reduces the conversion of glucosinolates to their active isothiocyanates, which may reduce their cancer-fighting potential.

According to research published in 2009, steaming led to the lowest loss of glucosinolates in broccoli while stir-frying and boiling (both higher-heat cooking methods) caused the greatest loss.

Cooking isn't the only way vegetables can lose nutrients. Before fresh vegetables reach your steamer basket or microwave, some of their nutritional value can be degraded during the time they're transported to a distribution centre, displayed in the grocery store and stored in your crisper. When possible, buy produce from farmers' markets to reduce the time from harvest to table.

When vegetables are out of season, consider frozen.

Frozen vegetables closely match the nutrient content of their freshly picked counterparts because they're flash-frozen at peak ripeness, a time when they're most nutrient-packed. (Vegetables that are shipped to the produce section of grocery stores are usually picked before they are ripe, giving them less time to develop their full nutritional potential.)

Eat your vegetables roasted, grilled, steamed, boiled in a soup, microwaved and raw. Enjoy them fresh (locally grown when possible) and frozen. The more variety you have, the more likely you are to eat them. And that's the whole point.

5 salad recipes to add more vegetables in your diet

Leslie Beck is a registered dietitian in Toronto. 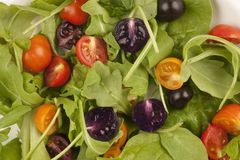