If you order your salad with fat-free dressing (just starch, sugar and salt), pass on nuts in favour of pretzels (white flour, salt and corn syrup) or read nutrition labels to choose foods low in total fat, it may be time to shift your nutrient focus. Your low-fat food decisions, based on a decades-long dietary warning to eat less fat, could be harming your health – and robbing your diet of disease-fighting nutrients.

On Jan. 28, the Dietary Guidelines Advisory Committee submitted its 571-page report to the U.S. government outlining its recommended revisions to current dietary guidelines. The panel's report will be the basis for the 2015 version of the U.S. Dietary Guidelines, slated for release later this year.

While a recommendation to withdraw long-standing warnings about cholesterol-laden food made headlines, another game-changing dietary recommendation slipped under the radar. According to a Viewpoint article published in the June 23 issue of the Journal of the American Medical Association (JAMA), the "less noticed, but more important change [of the Dietary Guidelines Advisory Committee's report] was the absence of an upper limit for total fat consumption." This could broadly change the way we eat and, in my opinion, for the better. Our appetite for (highly processed) low-fat foods appears to have worsened our cardiovascular health and widened our waistlines.

For decades, dietary guidelines both here and in the U.S. have recommended that we keep our total fat intake low. In last week's JAMA commentary, the authors stated "the limit on total fat presents an obstacle to sensible change, promoting harmful low-fat foods, undermining attempts to limit intakes of refined starch and added sugar, and discouraging the restaurant and food industry from providing products higher in healthful fats."

The current advice to limit total fat intake to 35 per cent of daily calories – a recommendation based on evidence now 15 years old – was not included in the report. The panel did state, however, that reducing total fat does not lower cardiovascular disease risk. And when it comes to obesity prevention, the committee recommended adopting a healthy dietary pattern that includes more vegetables, fruit, whole grains, nuts, beans and seafood rather than focusing on limiting total fat, a strategy that hasn't worked.

Dietary guidelines, the panel's report concluded, should not emphasize reducing total fat but should instead advise eating healthful types of fat – such as those found in nuts and seeds, vegetable oils and oily fish – while limiting saturated fats and avoiding processed foods high in artificial trans fats, two types of fat that raise LDL (bad) cholesterol and (in the case of trans fat) lower HDL (good) cholesterol in the bloodstream. It's about balancing your fat intake, rather than cutting all types of fat.

According to the JAMA commentary entitled The 2015 US Dietary Guidelines: Lifting the Ban on Total Dietary Fat, "with these quiet statements, the [Dietary Guidelines Advisory Committee] report reversed nearly four decades of nutrition policy that placed priority on reducing total fat consumption."

Since the release of the first Dietary Guidelines in 1980, Americans have been advised to cut dietary fat in an effort to lower the risk of cardiovascular disease and curb obesity. In its 1982 revision, Canada's Food Guide encouraged Canadians to also moderate total fat intake (as well as sugar, salt and alcohol).

The main objective of reducing total fat was to limit saturated fat and dietary cholesterol, thought to increase heart disease and stroke risk. However, the message became oversimplified to include all types of fat.

Newer evidence, however, does not support limiting total fat. In 2006, the Women's Health Initiative – a randomized controlled trial that enrolled 48,835 women ages 50 to 79 – found that eating a diet low in total fat had no effect on the risk of heart disease, stroke or colorectal cancer. (The findings did suggest a small effect on risk of breast cancer.)

Studies also suggest that eating a diet that exceeds the current daily fat limit reduces the risk of cardiovascular disease. A trial published in the New England Journal of Medicine in 2013 reported that following a Mediterranean diet supplemented with healthful fats from extra-virgin olive oil or nuts – both diets containing more than 40 per cent of daily calories from total fat – lowered the risk of heart attack, stroke, diabetes, weight gain and dying from cardiovascular disease.

Whether the absence of a total fat limit in the U.S. Dietary Guidelines Advisory Committee report will makes its way into the finalized Dietary Guidelines will not be known until later this year. Yet many nutrition experts, including me, hope they do.

According to Dr. Dariush Mozaffarian, dean of the Friedman School of Nutrition Science and Policy at Tufts University in Boston and co-author of last week's JAMA Viewpoint, "Fear of fat is embedded in North American consciousness, which is why we need to call on policy-makers to embrace modern evidence to lift the [total fat] limit. The U.S. and Canadian governments must together call for action on this topic."

A guide to healthy unsaturated fats 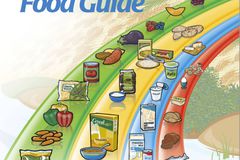