People with disabilities face any number of challenges, but perhaps the most insidious is society's unspoken belief that they are somehow asexual beings – neither wanting nor able to express that most universal of human needs.

It is a notion decidedly debunked by the film The Sessions, based on the true story of a man paralyzed by childhood polio and mostly confined to an iron lung, who at age 38 longs to experience sexual intimacy for the first time in his life.

The poignant story of writer-poet Mark O'Brien, played by John Hawkes, and his carnal awakening under the tutelage of a sex surrogate portrayed by Helen Hunt, should go a long way to dispelling the myths surrounding physical intimacy and people with disabilities, advocates say.

"The big one is this idea that people with disabilities are not sexual – not only that they literally cannot have sex, but also that they're not sexually desirable and that they don't desire sex," says Cory Silverberg, a Canadian sexuality educator working in New York.

Silverberg says the tendency is to view sex as two people sweeping each other off their feet, "and certainly not between two people where one person might actually have to lift somebody onto the bed, because that's not seen as sexy."

Unfortunately, he says, such stereotypical thinking gets absorbed by those whose physical abilities may be limited, sometimes severely, by any of a range of conditions, among them spinal cord injury, cerebral palsy, muscular dystrophy and multiple sclerosis.

"Often people with disabilities will say 'I'm not going to come to your workshop because I've never had sex, I'm not sexual.' And of course, that's not true. That's just a result of a lifetime of being told, but not explicitly.

"The trap is you begin to think that it's just you."

Surrounded by images of leggy models and A-list celebrities that shape society's definition of sexual attractiveness, it's no wonder people with disabilities struggle with body image and are sometimes reticent about physical intimacy, says Sandra Mills, a patient and family educator at Toronto Rehab's Lyndhurst Centre for spinal cord injury.

"When stereotypes and prejudices exist already and then you try to connect that with a disability, it makes it challenging for a person who acquires a disability to re-engage in a physical world, in a world of dating and socializing," she says.

Rich Vanderwal, 41, says his self-image took a severe blow after a motorcycle crash 20 years ago left him paralyzed below his armpits. He has mobility in his arms and hands but is reliant on a wheelchair to get around.

A ski and snowboard instructor during winter and a lifeguard in summer before his accident, Vanderwal admits much of his identity had been built around his athletic ability and once-buff physique.

"I was known as the guy who took my shirt off and I had abs. I was proud of them because to me that was a sign of fitness and, of course, sexuality and all those things."

He also put himself out there in the dating world.

Vanderwal says he always had a lot of female friends "and as luck and circumstance would have it, I started to become more intimate with these people who were already close in my social circle.

"That gave me a chance to kind of investigate what might be possible and my new comfort levels and how my new body was going to handle different situations."

Then he met Carole Chebaro, at the time a volunteer at Lyndhurst, where Vanderwal works part-time. They started off as friends, then began dating. Six years ago, Vanderwal and Chebaro married.

Early on in their relationship, Vanderwal says he worried about whether he was meeting all of Chebaro's needs. "But it's very clear that I could meet some of the important ones."

The couple hopes to soon start a family.

Vanderwal says he has tried medications like Viagra and can have intercourse "to a certain quality," but for the most part orgasm is not through intercourse and is "modified and different now."

"There's no actual physical sensation, but all the chemical changes within the body still go on. I still get the flushing of the face, there's that euphoric feeling and certain relaxations."

One welcome reaction is a quieting down of persistent muscle spasms, a common repercussion of spinal cord damage. "A lot of my spasticity, which is there 24-7 – literally my spasticity is firing off every 15 seconds all day and all night – after orgasm that's gone for a good hour. I'm completely relaxed," he says.

The ability to move or feel sensations below the site of a spinal cord injury may be lost or disrupted, depending on the extent of damage, Mills.

Even so, people with such injuries can "absolutely" experience sexual intimacy, she says.

"It actually can trigger an orgasm in a different sense. Orgasms are half mental. So the orgasm comes from these erogenous zones, but happens in the brain."

Gratification also often comes from satisfying the partner without a disability, Mills adds. "It's in seeing the joy and the relief and the orgasm in their partner that really brings out a whole new sense of meaning to that intimate act."

For Anita Kaiser and her husband Bobby, sexuality is all about intimacy, not intercourse.

In 1996 at age 24, Kaiser suffered a spinal cord injury in a car crash that left her a quadriplegic with some arm movement. The Richmond Hill, Ont., couple had been dating for about six years and married three years after her accident.

Sex raised a number of difficulties: Kaiser has what's called autonomic dysreflexia, a response by the body to stimulus below the injury site that can cause dangerously high blood pressure, a slowed heart rate, even seizures.

As well, her husband was hesitant about sexual intimacy because of her loss of sensation and movement. "It felt weird to him. He felt almost in a sense that he was taking advantage of me. It's like, 'I feel it and therefore I'm getting pleasure, but if you don't feel it, you're not.' "We just chose not to be sexually active in that sense and our activity was more focused on intimacy – just more the closeness and the cuddling and affection and that sort of thing."

"And that's another big misconception: people don't realize that people with disabilities can actually get pregnant and have kids and be parents, and be very successful and capable parents," says Kaiser, whose four-year-old daughter Olivia was conceived through insemination with her husband's sperm.

Vanderwal says while the body may change with a spinal injury or as the result of a disabling disease, one's likes, dislikes, interests and desires remain intact.

"It doesn't matter what body you're in. Your mind and your thoughts, it's a natural process to have attraction and want to share that sexual energy with somebody else.

"So it's perfectly normal and it should be expected from everybody, not just the healthy, good-looking Hollywood-type people that are in our society." 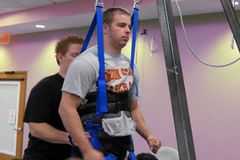