Yes, we know. The reason you stare so intently into those wall-sized mirrors at the gym is not self-admiration; it's to ensure that your back is straight and your form is perfectly balanced. We believe you.

But does it actually help your workout?

That's the question that occurred to Israel Halperin, a physiologist at the Australian Institute of Sport and Edith Cowan University, after observing the ubiquity of mirrors in gyms, martial-arts studios and dance schools. There was little previous research on the topic, he found, and the results were conflicting. So he decided to investigate.

The resulting study, which was published recently in the journal PLOS ONE, compares working out while gazing at a mirror with other ways of directing your attention. Mirrors, it turns out, are neither the best nor the worst place to focus. Instead, what matters most is concentrating on the external consequences of your actions rather than on the internal movements of your body.

The subjects repeated each movement four times, with different instructions given in random order. In one case, they were given no specific instructions other than to produce as much force (or jump as high) as possible. In the other cases, they were told to do this while looking at themselves in the mirror; while focusing on contracting their muscles as hard and fast as possible; or while focusing on pulling the strap (or pushing off the ground) as hard and fast as possible.

That doesn't necessarily mean that mirrors are useless, Halperin says. It might help "when the information derived from the mirrors is relevant to the task," such as a dancer who needs to know if his or her limbs are in the right position during a sequence.

However, even if those cases, doing all your training in front of mirror could eventually backfire, Halperin cautions. "This is because information derived from senses other than vision, such as proprioception"– a form of body awareness based on feedback from muscles and tendons – "could be underdeveloped over time."

In other words, mirrors are fine when you're learning a motion, but the goal should be to learn it well enough that you can feel whether you're doing it right.

The difference between external and internal focus – an edge of about 12 per cent in the force produced during the biceps curl – may seem more surprising. But it's consistent with many previous studies in a wide variety of activities, Halperin says. In other words, you'll sink more free-throw shots, for example, by focusing on the front on the rim than on the motion of your wrist.

According to the "constrained action" hypothesis, an idea proposed by University of Nevada psychologist Gabriele Wulf, imposing conscious control on complex movements makes them less efficient. Instead, concentrating on your movement's intended effect allows well-learned movements to proceed on autopilot. That's why tying your shoes is easiest when you don't think about it.

This logic may apply even to seemingly simple activities, such as running. A 2009 study by researchers in Germany found that runners were most efficient when they focused on their surroundings compared to thinking about their breathing or their running form.

Still, not all forms of internal focus are equivalent, points out Noel Brick, a psychologist who studies attentional focus at Ulster University in Northern Ireland. Focusing on "the movement of the feet," as the runners in the German study were told to do, might feel especially awkward and unnatural. In contrast, periodically assessing your posture and cadence could be useful cues to ensure you're running smoothly, even though they're internally directed.

Over all, though, this body of research suggests that for many sports and exercise tasks, directing your attention outward will produce the best results – which brings us back to Halperin's original question. Does watching a reflection of yourself constitute an internal or external focus? It's not obvious either way, which may explain why the mirror results were, on average, no better or worse than the control condition.

Still, Halperin's findings do suggest that whatever activity you're doing, the mirror should be at most a source of occasional cues and self-checks, not an object of fixation. Not that you were staring at it, of course. 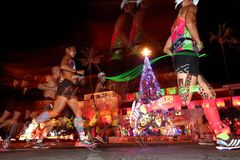 Do post-workout ice baths help with the recovery of sore muscles?
July 14, 2020
Canadian researchers reaffirm the benefits of exercise for a healthy brain
October 13, 2016
Follow Alex Hutchinson on Twitter @sweatscience
Report an error Editorial code of conduct
Due to technical reasons, we have temporarily removed commenting from our articles. We hope to have this fixed soon. Thank you for your patience. If you are looking to give feedback on our new site, please send it along to feedback@globeandmail.com. If you want to write a letter to the editor, please forward to letters@globeandmail.com.
Comments