In 1983, 44 lung transplants had been performed around the world and 44 had failed. All of the patients died within days or weeks.

But for Tom Hall, a Toronto man suffering from idiopathic pulmonary fibrosis (scarring of the lungs), a transplant was the only hope, a "shot in the dark," as his doctor said, even though the three other lung transplants attempted in Toronto had been unsuccessful.

Presented with the grim odds, Hall told the doctor: "It would be a privilege to be patient 45."

He not only survived, but thrived, going from his death bed at age 58 to living another 61/2 years and, in the process, helping make Toronto General Hospital a world-renowned transplant centre.

This week in Toronto, the 30th anniversary of Hall's groundbreaking surgery is being honoured. Canadians may not be very good at celebrating success, but lung transplantation is a uniquely Canadian success story. So on Wednesday, health professionals and patients will gather at the Four Seasons Hotel in Toronto for a "birthday" party, and they will watch a tug-at-the-heartstrings video entitled simply "45."

The occasion is important for a couple of reasons. It's a reminder just how far medicine has come in a relatively short time, with lung transplants going from the realm of science fiction to comparatively routine procedures (as much as any transplant surgery can be considered routine).

The idea of doing lung transplants dates back to the 1940s and, for a long time, experiments conducted on dogs often ended in frustration. The invention of the heart-lung bypass machine in the late-1950s, however, enhanced the possibility of success.

The first human lung transplant was performed in Jackson, Miss., in 1963 – on convicted murderer John Richard Russell. He agreed to serve as a human guinea pig, and lived 18 days after the surgery. (Suffice to say that ethics rules were a little more lax at the time.)

Over the next two decades, there were dozens of desperate surgeries, all ending in failure. The problem was two-fold: Lungs are very fragile and can be badly damaged in the transplant process; and the body is programmed to reject foreign intrusions, even potentially lifesaving organs.

In the early 1980s, cyclosporine – an anti-rejection drug – was approved for use, and it revolutionized transplantation. Researchers and physicians also found new ways to preserve lungs in the crucial hours between their removal from a brain-dead donor and transplantation into a recipient, and surgeons honed their skills.

The innovation that kept Hall alive longer than others was a surgeon's hunch – he took the omentum (fatty tissue in the abdomen known for its healing properties) and wrapped it around the new lung.

After Hall's operation, surgeons stayed in his room around-the-clock for weeks to monitor his condition. They were understandably concern: In 1983, medical experts had almost given up on lung transplantion because of repeated failures. But Hall's case, a successful single lung transplant, opened the door to a series of dramatic advances.

All of these milestones were achieved at Toronto General Hospital (now part of the University Health Network).

"It's quite a remarkable record, and we're really proud of it," Dr. Shafique Keshavjee, surgeon-in-chief at University Health Network and director the Toronto Lung Transplant Program, said in an interview.

Since the dramatic breakthroughs of the early years, there have been slow but steady improvements, especially in harvesting and preserving donor lungs, many of them the work of Keshavjee and his team.

As a result, the number of transplants has soared, and so has the survival rate.

Last year in Canada, there were 232 lung transplants; per capita that is the highest rate in the world. But at the beginning of this year, there were 318 people on waiting lists because of the severe shortage of donors. Transplants are done principally for patients with cystic fibrosis, chronic obstructive pulmonary disease, emphysema and pulmonary hypertension.

(Since 2000, it has been possible to do lung transplants from living donors, but the technique requires two people to each donate one lobe of a lung, so it is only used as a last resort.)

The one-year survival rate is 85 per cent, and over 10 years the rate is almost 30 per cent. The Toronto program has 22 patients who have survived 20 years or more after their lung transplants.

The next innovation will likely be a shift to regenerative medicine, using gene therapy and stem-cell therapy to repair lungs in sick patients. This will – theoretically at least – reduce the need for donated organs and virtually eliminate the problem of rejection. A gene-therapy trial begins in Toronto next year.

"Ultimately the goal is to never have to do a lung transplant," Keshavjee said.

Until then, it's worth remembering patient 45, and celebrating how far we've come. 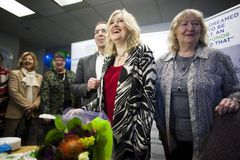 Need new lungs? Don't be picky
May 31, 2012
A boost to lung transplants
December 16, 2010
Follow André Picard on Twitter @picardonhealth
Report an error Editorial code of conduct
Due to technical reasons, we have temporarily removed commenting from our articles. We hope to have this fixed soon. Thank you for your patience. If you are looking to give feedback on our new site, please send it along to feedback@globeandmail.com. If you want to write a letter to the editor, please forward to letters@globeandmail.com.
Comments