Just two or three experiences with "magic mushrooms" helped a dozen long-term smokers quit, succeeding in a study where numerous other approaches failed.

The volunteers took a pill containing psilocybin, the active hallucinogenic ingredient in magic mushrooms, as part of a cognitive behavior therapy program at Johns Hopkins University in Baltimore. Six months later, 12 of the 15 participants remained smoke-free, according to the study results published today in the Journal of Psychopharmacology.

Existing medicines like Pfizer Inc.'s Chantix, the most potent aid for smoking cessation, have a success rate of about 35 percent at six months. Nicotine patches and gums are less successful, said Matthew Johnson, a study research and an associate professor of psychiatry and behavioral sciences at Johns Hopkins. The results show unique promise in the first study ever of psilocybin for smoking and may lead to new approaches to treat other types of addiction, Johnson said.

"The rates of quitting were so high, twice as high as what you typically see with the gold standard medication," he said in a telephone interview. "It is a very small study, but it's an indication that something very strong is going on here. It answers the question of whether this is worth pursuing."

The smoker study is among a variety of projects begun in the past few years to research the potential therapeutic use of hallucinogenics for such conditions as chronic headaches, cancer and depression.

Because the psilocybin pill was given in combination with behavior modification therapy, including counseling and keeping a journal, it's not clear how much of the benefit for the smokers came from the hallucinogen. Future studies are being planned to include a comparison group who won't receive the mind-altering compound, and all participants will get brain scans to help researchers pinpoint and study where the effect occurs.

A wide range of volunteers took part in the study, including a teacher, a lawyer and a museum worker. They were all more interested in quitting smoking than in taking a psychedelic drug, Johnson said. Conducting the research in a carefully controlled environment allowed the investigators to protect the volunteers and avoid the acute anxiety that can occur, the experience that's generally known as a "bad trip," he said.

The therapy occurred over two or three sessions. Volunteers came to a laboratory set up like a living room, took a 20 milligram pill of psilocybin, covered their eyes and relaxed with music for several hours as the psychedelic effect took hold. Those who had a transcendent experience, where people say they went into a mystical state that helped them feel unity with themselves and the universe, tended to have more success, the researchers said.

All the volunteers returned two weeks later for another round with a higher dose of the drug. They were all offered a third experience, though several declined, Johnson said. The treatment doesn't involve swapping one drug for another, said Johnson, who pointed out that hallucinogens aren't addictive.

"The last thing people want to do is use this again the next day," Johnson said. "This is outside the box. When a typical drug goes in the body it has an effect, and when it leaves the body the effect is gone. The fascinating thing is that the experiences with these hallucinogenic compounds can change people."

Canada's grocers embrace the magic of mushrooms
May 12, 2018 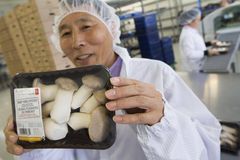