For all the talk of an AIDS-free generation and the excitement at the prospect of ending the epidemic, here is the cruel mathematical bottom line: More than 70 million people have been infected with HIV, 36 million have died and only one person has ever been cured of AIDS.

He is Timothy Ray Brown, better known by his scientific moniker, the "Berlin Patient."

Mr. Brown, an American from Seattle, was attending school in Berlin in 1995 when he tested positive for HIV. Like many infected, he benefited greatly from the advent of antiretrovirals the next year, essentially living without symptoms.

"I got used to a lifetime of pills and … my HIV moved to the back burner," he said.

But in 2006, after seeking treatment for debilitating fatigue, Mr. Brown was diagnosed with leukemia, and treated with chemotherapy. A year later, the cancer returned, necessitating a bone marrow transplant.

To transplant bone marrow, a patient's immune system must essentially be destroyed and rebuilt anew, obviously a risky prospect for someone with HIV, a virus that attacks the immune system.

Mr. Brown's oncologist, Gero Hutter, had a novel idea. At the time, there was much excitement about something called a CCR5 receptor mutation. (CCR5 receptor allows the HIV virus to latch on the cells and infect them. But some people – about one per cent of those of European background – had a mutation which meant the virus could not attach making them resistant to HIV.)

Dr. Hutter's idea was to look for a donor with CCR5 mutation, in the hope he could make Mr. Brown resistant to HIV.

Long story short: A donor was found – on the 61st try – and it worked.

Mr. Brown was tested after the transplant and had no detectable virus in his body.

"It is reasonable to conclude that cure of HIV infection has been achieved in this patient," Dr. Hutter wrote cautiously in the medical journal Blood.

Mr. Brown thrived – returning to work, putting on weight and he even stopped taking his HIV medication as it was no longer necessary.

But seven months later, he developed leukemia again, and had a second transplant from the same donor.

This time the treatment almost killed him: He suffered neurological damage, he couldn't walk, he was incontinent.

"I wouldn't wish what I went through on my worst enemy," Mr. Brown said Tuesday at a media briefing at the International AIDS Conference in Washington. "There were times I wished I would die."

But he was still free of HIV and, when his case was written up in a medical journal, he became a scientific sensation, albeit an anonymous one.

The idea that a person's immune system could be revamped with genetic engineering was born.

It remains an elusive prospect.

Two other patients – both with HIV and leukemia – underwent marrow transplants from donors with CCR5 receptor mutations. Both died.

Carrying out the procedure on others cannot really be justified, financially or ethically.

So Mr. Brown remains, simultaneously, a medical miracle and a medical oddity.

At age 46, he is frail, has trouble walking and clearly has some neurological sequelae.

But he has decided to no longer remain invisible.

On Tuesday, Mr. Brown announced plans to start an eponymous foundation to fund research aimed at finding a cure.

"It's my hope that my life and story will inspire others," he said. "Let's send a vital and unambiguous message that more can be done to find a cure."

The group's CEO, David Purdy, was hyperbolic in his enthusiasm.

"We join Timothy in his dream to find a cure," he said. "Inside him lies the answer to a cure." 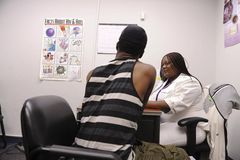 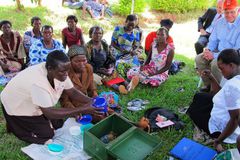