Last summer, when Starbucks began hearing from employees at five forums across the country, the company didn’t expect mental health to become the top talking point. The forums were targeted to staff between the ages of 18 and 24, and, hosted by the company executives, were an invitation to discuss youth issues. But in each city, their employees kept bringing it up – not only struggles with depression and anxiety, but grief, work-life balance, care-giving stress.

The result of the forum was Starbucks Canada’s announcement earlier this month of an increase in coverage of psychotherapy to $5,000, one of the largest amounts of coverage in the country. Starbucks undoubtedly crunched the numbers and saw the advantages – good PR, a healthier, happier work force that misses fewer shifts. But it was still millennial employees who raised the issue first.

The move by Starbucks is an example of the way that millennials – those employees in their mid-20s and 30s – are contributing to a pro-active conversation on workplace health in general – one more oriented toward preventative medicine, positive mental health and well-being.

Google and Facebook are famous for their millennial-friendly extras. But benefits experts say there is a growing trend for more traditional firms to follow suit, in part to attract and retain younger employees. That includes expanding employee assistance plans, creating more holistic benefits around fitness, providing advice to reduce stress around debt and adding digital mental-health services – in part to attract and retain millennials. At ATB Financial in Edmonton, for instance, employees can trade benefit credits for vacation days and a “wellness” account that can be used widely, for example, for new skis or yoga. At National Leasing in Winnipeg, the head office added a nap room and gym and now runs an annual week of mental-health programs, including daily meditation classes and motivational speakers – an idea conceived by one of its many millennial employees after a first-hand experience with a mental-health issue.

For all the rhetoric about entitled millennials, these changes are a good deal for everyone. And not only does a decision such as Starbucks’s help spur more companies along and balance some glaring inequities in Canada’s health-care system – particularly access to an important treatment such as therapy – it’s also good for the country.

As Krishna Patel, 24, who works for a Toronto insurance company, puts it, “You want to have options, so you aren’t just going to a doctor and popping pills.” Benefits wouldn’t decide a job choice, but all things being equal, she says, they would would tip the balance. “Not providing these services seems outdated, conservative and regressive,” she says. “Even if I don’t use it, it’s a sign they care about their employees.” 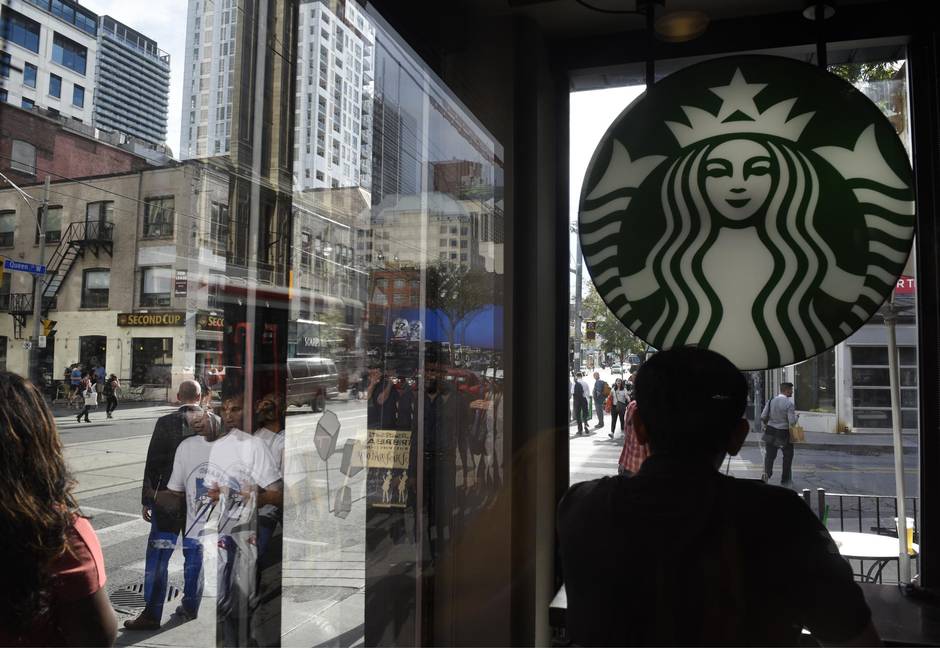 A customerr sits by the window of a Starbucks coffee shops located across the street from a Second Cup coffee shop (LEFT) at Queen St. West and John St. in downtown Toronto, are photographed on August 16 2016. (Fred Lum/The Globe and Mail)

No wonder millennials want coverage for gym passes and therapy and individual health spending accounts that let them use their benefits for the services they want. This is a generation that came of age during stigma-busting campaigns, such as Bell Let’s Talk, and as mental illness entered the common parlance of celebrities. They have been urged – by their teachers, doctors and parents – to seek help when they need it. Owen Kelly, a psychologist in Ottawa, says that among his younger patients, “there is a increasing recognition that some of what we have labelled a ‘medical problem’ also falls under the category of a human problem.”

And yet, as provincial health ministers meet with their federal counterpart Jane Philpott to haggle more money out of Ottawa in health-care transfers, we should not expect a golden pot of cash to add new services for mental health. The government farthest along in creating a publicly funded program for therapy is Quebec. Their scientific health agency has released two reports making the case for it and another is expected next year to propose how to do it. The price tag for publicly-funded therapy in the province was estimated around $450-million, a small sliver of Quebec’s $32-billion health care budget. But Health Minister Gaétan Barrette, who praised the move by Starbucks, has already said that Ottawa will have to kick in much more than it’s promising just to keep hospitals running properly – let alone expand areas such as home care and mental health.

Companies have done the math: Wellness programs pay for themselves in productivity, employee satisfaction, reduced absenteeism. Millennials come with their own unique demands, leading a push for online and virtual services and a wider range of therapies, such as mindfulness and resiliency training, according to Lori Casselman, a former Sun Life financial executive, now working as chief health officer for LEAGUE, a digital health insurance company. “They are a force for change,” Casselman says. “We can learn a lot from what they have been accustomed to – being more transparent, more self-aware. Because of that, we are seeing more of a reduction in the stigma around talking about mental health.” The push for flexibility and faster access to resources is something, she says, “other generations are benefiting from because the industry has to respond.” And, she says, while young employees won’t choose a company for its benefit package, they do treat it as “reflection of workplace culture” as Krishna Patel pointed out.

But companies are only patching up – not fixing – a big hole in Canada’s mental-health-care system, one in which wealthy, working Canadians get better access to the science-based treatment. The Starbucks benefit is a good one – it doesn’t limit the kind of therapy (although it requires employees to see a licensed social worker or psychologist), it doesn’t require a doctor’s referral, it’s large enough to make a difference. (The company’s previous $400 plan was in line with what many companies still offer – barely enough to cover a couple of sessions with a psychologist.) But coverage is only available to Starbucks employees who work more than 20 hours a week, which is about two-thirds of their 19,000 Canadian employees, according to company estimates. And, as one barista in Ottawa pointed out, it might be hard for someone dealing with a mental-health issue to be available for every shift or to perform under pressure during busy times and they are still dependent on an understanding manager. “My skepticism is that it’s one of those things that looks good on paper,” she said, asking that her name not to be used. “But how will it translate into real help for the people I work with?”

The consequence of telling more people to seek the help they need is that they will actually expect to get it when they come looking – true for both the public health-care system and the workplace. “If I have an employee who is willing to come forward and share that kind of information with me,” Casselman observes, “I better be well-equipped to respond to that as a manager.” 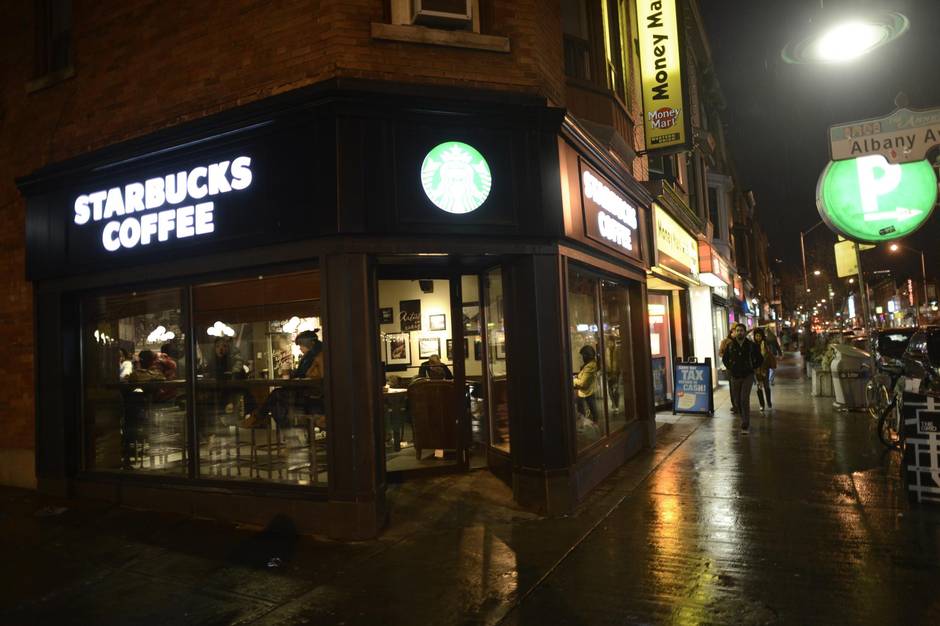 Exterior of the Starbucks coffee shop at Bloor St. West and Albany Ave. in Toronto on March 11 2013. (Fred Lum/Globe and Mail)

Fadi Dawood, 30, a historian at the non-profit think tank NATO Association of Canada, and a lecturer at Lakehead University in Orillia, describes “a generational schism. Most of the individuals who control benefits tend to be baby boomers, and those who are entering the work force are saying, ‘you can’t have the same expectations.’” In his parents’ day, he suggests, there was no mental-health awareness – an employee complaining of depression or anxiety would be more likely told to get over it and work harder. But his view of his peers – and his students – is that they have a more complex view of mental health and are less likely to see shame in a therapeutic tune-up. He sought a short course of therapy himself at university, when stress was starting to interfere with his work. “Some of the coping strategies I learned, I continue to use in my life,” he says. More significantly, he is willing to talk about it, though still with some trepidation. “If companies want a healthy work force,” he says, “[covering therapy] is probably one of the most important things to provide.”

Alec Toller, 28, suggests the view around therapy has shifted for his peers, including among men, who have traditionally been more resistant to seeking help. He has gone himself, for a bout of moderate depression and anxiety. “I didn’t want to be dependent on a drug to feel better. I wanted to to change the behaviour rather than my brain.” But a full course of therapy was only affordable because of coverage he received through the Directors Guild of Canada while working as an assistant picture editor. Like Dawood, he uses the lessons from those 12 weeks in other part of his life – “not just to not feel better, but to feel really good.” Now studying for his masters in psychology – in part, inspired by his positive experience in therapy – he argues there’s an ethical concern also at stake, beyond the economic case for business. “We have to make mental health truly accessible. It can’t be a service for the wealthy.”

Don’t count on the the push for more flexible, accessible, individual benefits, and best-evidence treatment to lighten up. Coming up behind the millennials is another generation, even more tech-savvy, with even more mental health awareness. “Youth are taking over the conversation,” says Connie Coniglio, the executive director of BC Mental Health and Substance Use Services. “Hopefully, that will produce a shift in the way we all see things and the way services are delivered.”

With their insistence that employers see through on their wellness talk, their wish to make mental health a priority in the workplace, and their desire for benefits that actually cover their needs and for treatment that actually works – those millennials, they have some nerve.