As she sings the lyrics, Williams pauses to leave a word unsung at the end of a phrase, letting the guitar lapse into silence.

It is a sign for Katherine to join in on the song – and her delighted squeal comes right on cue.

Katherine has cerebral palsy and is unable to speak, see or walk. But music therapy has opened a whole new world to the little girl with the angelic face and joyful smile.

"It brings me so much happiness," says Katherine's mom, Diana Sanita. "It gives me hope that one day she might be able to take those vocal sounds and turn them into a word or two to help people understand what she wants.

"But more than anything, seeing her happy makes us so happy. And she loves it," says Sanita of Georgetown, Ont., near Toronto, who bunked in with Katherine at the Hospital for Sick Children for more than two months while her daughter was being treated for kidney and lung problems.

"And it gives me some insight into her world. We're never quite sure what her cognitive level is, but it's pretty apparent in music therapy that she gets it. She knows what's going on. She knows when it's her turn to sing, she recognizes songs, she anticipates.

Seeing Katherine so engaged is a joy, too, for Williams, a certified music therapist who has been working at Sick Kids for about a year, assigned to patients in the small-organ transplant unit and general pediatrics, which covers a wide range of illnesses.

"Beautiful singing today, Miss Katherine," she croons to her young charge, as fellow music therapist Ruth Roberts takes up the guitar, leaving Williams to play a bongo drum for another rendition of The Lion Sleeps Tonight.

Roberts, who has been with the hospital's music therapy program since its inception in 1999, points to Katherine's hands. Usually tightly fisted, her palms are open and her fingers relaxed.

Music is working its magic.

"What we realize is that children when they're unable to do anything else – maybe they can't move, maybe they can't see, and even kids who can't hear well, you can get to them through rhythm. If they're no longer able to participate in life in other usual meaningful ways, the music can still reach them and help them to express who they are and represent themselves in our world," Roberts says.

Indeed, that's one major goal of music therapy, which the Canadian Association for Music Therapy describes as a means to "promote, maintain and restore mental, physical, emotional and spiritual health."

Music can help reduce anxiety and even pain, as well as give youngsters who are typically subjected to repeated blood drawings and other tests an opportunity to exercise some control and independence, says Williams.

"It also gives an opportunity for creative expression or to process feelings and emotions," she says.

Roberts says kids with cancer often tell her the sessions help them cope with chemotherapy, while families say it eases the stress of having a sick or dying child in hospital.

"In the ICU, if I'm in a room with four very sick children and playing guitar with one child, that sound will travel and the nurses, all the staff will comment how it helps to de-escalate the tension and general level of anxiety in the room," she says.

While Roberts and Williams work primarily with children, Canada's roughly 550 accredited music therapists treat clients of all ages in a variety of settings and with a wide range of conditions, among them brain injury, autism spectrum disorder, mental illness, post-traumatic stress disorder and dementia.

At the Baycrest geriatric care centre in Toronto, the focus is on using music therapy to enhance quality of life for aging residents with a variety of disorders, from dementia and Parkinson's disease to depression and the effects of stroke.

"What's important for people to know is that music makes a significant impact on the quality of life in older adults with cognitive impairment and helping them engage and actively participate in their environment," says Amy Clements-Cortes, who heads the program.

Over time, residents with Alzheimer's or another dementia forget the faces and names of loved ones and even their own name, and eventually lose the ability to speak, says Clements-Cortes, who also teaches music therapy at the University of Windsor and Wilfrid Laurier University in Waterloo, Ont.

"But you target a song that's in their long-term memory, from their teen years or their early 20s, and they can sing the entire song with you.

"It's phenomenal, and I think for a daughter or son who comes to spend time with their mother, for example, who doesn't know who they are, to see them participate that way, it's like they see a piece of their mother that was lost.

"Music provides a way into the soul. It provides a connection to others."

People with Parkinson's, a movement disorder marked by tremors and an abnormal gait with periodic episodes of freezing midstep, also can benefit from the therapy.

Rhythmic auditory stimulation, which employs music with a beat, is one technique for improving movement.

"It's quite miraculous," says Clements-Cortes. "The client that is shuffling their feet, they're pigeon-toed with the Parkinson's, you put on that beat and their breathing resonates with it and they're able to march or walk to that beat."

Clements-Cortes says the course of therapy may involve writing songs or a musical biography with a client "as a way of ending or closing relationships with loved ones."

"I might come as a therapist with some suggested melodies that I play them and ask them to choose. They may have the melody or the key that they want, a tone that they come with."

She recalls working with a woman who was dying from a brain tumour and could no longer speak, but was able to sing.

"We sang a lot of Broadway songs, those were her favourites," Clements-Cortes recalls. "And as the disease progressed, she could no longer participate but was animated and could appreciate the music she heard."

As the woman's health declined, the therapy became more about the time with her husband, who brought her to every session.

"One week, he brought in a box he wanted to share with me, this box of poetry and love letters they had written and mementoes they had kept," she says. "And I said, 'You know, we could turn these into songs.' "So we recorded all of them and sang all of the songs at her memorial after she passed."

Music can also help soothe a child in palliative care and give families a way to express their sorrow over a dying child.

"In palliative care, you adjust the music. They will be requiring music that is much less complex harmonically and rhythmically and melodically," explains Roberts, who sings and plays guitar, flute and piano.

Often a family will have been holding it together emotionally and they hear one chord on the guitar and it opens the floodgates of grief, says Roberts.

"That's part of what we do as therapists – we accommodate, we make a place for the grief, we don't try and make it better. We try to allow it to be expressed and to provide comfort and support for it."

While the work can be psychologically draining and even physically taxing, Williams says it's also "extremely rewarding."

"You can provide an outlet ... for a patient or their entire family that they wouldn't get any other way," she says, recalling what one father told her:

"'You come in here and you play that guitar and the walls seem to disappear and the beeping disappears, and suddenly I'm transported ... I'm transported to another place. And for that half an hour, it's good.' "When you hear that, you're humbled by it," Williams says. "It humbles me every time and leaves me in a place of awe and gratitude for what I can give." 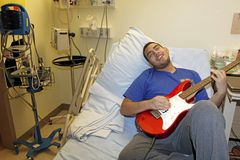 Tapping music’s power to heal the brain
February 19, 2012
Research may lead to new therapies for stuttering
November 21, 2010
Report an error
Due to technical reasons, we have temporarily removed commenting from our articles. We hope to have this fixed soon. Thank you for your patience. If you are looking to give feedback on our new site, please send it along to feedback@globeandmail.com. If you want to write a letter to the editor, please forward to letters@globeandmail.com.
Comments