Once I was a woman with a great fear of cancer. A woman who regularly went to second base with her GP, who waited with a full bladder for more than her fair share of ultrasounds and the words "nothing malignant here" to diminish the pain that anxiety had inflated. Then one day something malignant was there and everything changed. I will never again know a life without cancer.

It was a year ago that I was diagnosed with marginal zone lymphoma and took a sharp turn onto a bumpy road of chemotherapy, scans, blood work, painful invasive tests, results, more chemo, more blood work, more scans, more tests.

I went from being anxious for no good reason, to anxious with cause.

(This column is part of Aviva Rubin's series, Adventures in Lymphomaland. Read her previous columns here.)

When you're told that your "good-news" cancer can't be cured but it can be lived with and treated, and then treated again when it comes back, then again, hopefully, once new treatment options have been developed, it calls into question the whole notion of what marks the end. On the one hand, there likely won't be that dreaded how-sad-she-was-so-young ending, for which I'm grateful. On the other hand, there will be no ending at all – no feeling of relief as time puts distance between me and my lymphoma.

No one who gets cancer escapes the fear of its return, but the dread of certain recurrence feels like something different. I'll never count away from my lymphoma, but toward it. "Five years out" won't have the same meaning for me. Cancer will shift from front burner to back burner to front burner, on no reliable schedule, taking who knows what physical toll.

So where do I go from here, and how do I get there while hooked up to an uncertainty drip for the rest of my life?

The first glimpse at my new world order came after six months of chemo, when it was recommended I do four weeks of daily radiation that could leave me partially bald, burn the life out of my vagina and do nothing to prevent recurrence, except maybe in the spots where my tumours had set up shop. Since lymphoma can't be relied on to repeat its patterns, I sought another opinion. Four out of five oncologists on the second-opinion tumour board recommended I not go ahead.

I was thrilled, liberated, spared and terrified. Other than two years of a quarterly rituximab spritz, the less debilitating part of my chemo cocktail, I was done. Nothing left to worry about except doing it all over again. But good news has a way of fading fast, while terror likes to linger. I'd developed a co-dependent relationship with my treatment – an unhealthy and mentally dangerous if-you're-not-part-of-the-solution-you're-part-of-the-problem attitude.

I'd never felt so little control over anything, so unclear about who this left me, so utterly justified in my anxiety. The legitimacy didn't feel as good as it should have.

Still, I decided to celebrate the sort of conclusion of treatment with two weeks on a beautiful island in Croatia, swimming every day in the sea. Four days after I got back, the cancer sideswiped me, knocking my white blood cell count dangerously low. It put me in the hospital for a week where I waited to build the immunity I needed to face the world, and my two kids. The fear of contracting an infection momentarily trumped the fear of delaying the maintenance chemo that's supposed to stave off a recurrence. Was the lymphoma going to come back sooner than expected? Was I going to die from pneumonia or C-diff? Is this what over feels like?

On the third day in hospital I tried to go outside to get some air. It was a long way down from the 14th floor. Masked, I pushed the button with my elbow. On the 12th floor people flooded in, wrapping me in a germ-exhaling mass. I panicked, cried and got off on the 11th.

"Don't get too cocky," my cancer seemed to say. "I live here now. I can knock you down when you least expect it." It was likely not the lymphoma talking but the chemo I'd received to kill it. Or maybe it was just my full-time resident anxiety. Does it really matter who was yelling or whispering in my ear? Someone was constantly freaking me out.

When my oncologist finally sprang me from the hospital with white blood cell levels still low but climbing, I felt ecstatic for about 20 minutes, then plummeted closer than I've ever come to real depression. How do I prepare for being ambushed at any moment by cancer and its compatriots? I hid in bed for days watching back-to-back episodes of whatever I could find. When I wasn't watching, I was crying.

No longer hard at work on the cancer problem, I was simply scared, unemployed and questioning my identity. Was I still Cancer Girl? I'd blogged about every intimate detail of my experience. I'd written about it here in The Globe and Mail and in The New York Times. I was momentarily a voice for my people. I was popular.

At the same time I wanted out. I'd had enough. As soon as I got the go-ahead for maintenance chemo I resented any reason for being back at the cancer centre. My psyche had moved on. All my tolerance for the smells, the waiting, the three tries to get the IV in my vein, was used up. It made me sick to look back at the smiling, I can do this photos people took of me in my chemo chair to mark every round.

Since I was first diagnosed and started trimming the overstimulated edges of my mind with Ativan most nights, people suggested I try antidepressants, so when I arrived at the inevitable sharp and bumpy bits, they'd already feel less sharp and bumpy. I'm not judgmental of those who choose drugs, but I'm resistant. I dread the sharp bits, but I don't want to dull them. Until they tell me that antidepressants actually cure cancer or extend life, I'd rather field the cuts and bruises.

It's situational, we tell myself, me and my therapist who has years of experience working with cancer patients. Of course I'm anxious and prone to be blue. Things have really sucked. But if the pain and nasty side effects of treatment have been replaced with perpetual fear, even when I'm feeling physically fine, does the situational/chemical imbalance distinction really matter? Should I try drugs?

For the first time, in a life overflowing with thoughtful suggestions that yoga or deep breathing might be helpful (code for "you're way too hyper for anyone's good") I decided to try a mindfulness meditation course. As someone for whom five minutes of meditation was akin to dumping two pounds of red ants into my pants, it was a leap.

It's only been a few weeks, but it's possible meditation may be my shock absorber. After the first class I had a massive sobbing meltdown in a Costco over a pair of lost Ray-Bans, the second I'd lost in as many months. Other than that, I feel as if I've backed away from the edge. I'm hoping that like my middle-aged adoption of flossing, it'll become a habit I can't give up.

During week one a friend asked "So you meditate for five minutes a day, then feel anxious for the other 23 hours and 55 minutes?"

Something's working. After decades of spinning out, the anxiety may be shrinking. I always wondered about the point of hanging out "in the moment," getting nothing done, not even allowing my brain to contemplate the shopping list, the parent-teacher meeting, the laundry?

Exercise is good for lots of things, but when it comes to life's pressure, it's like flipping the lid on the kettle so it stops whistling. Meditation is like turning down the heat, so the pressure doesn't build up as much in the first place. It's just possible that age-old dysfunctional circuits are being dismantled and rewired. Slowly. Something's changing – something I never knew I've always needed. I've been handed a slice of peace.

I have two choices while moving away from and back toward cancer – manage or manage. I'm a lousy manager, but I'm not a bad seeker. Coping, it turns out, doesn't just happen, it's something that must be sought out, one breath at a time.

As I start my journey in the world of cancer, lymphoma is the new good news
March 2, 2014 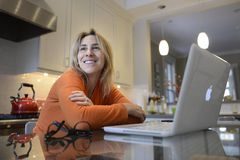 How I learned to speak cancer: There are no right answers, or questions
March 9, 2014 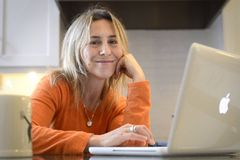 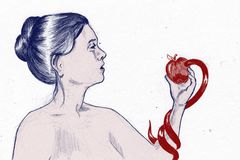 I never thought about playing on Team Cancer until I was recruited
March 23, 2014 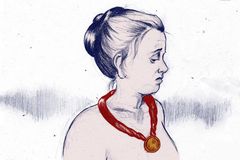 Parenting through cancer is messy business, filled with unknowns like the disease itself
June 5, 2014 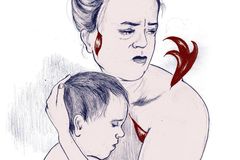 Adventures in Lymphomaland: Our readers share their stories about life with cancer
March 30, 2014 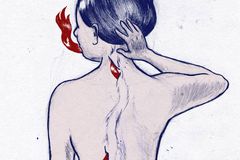