Dr. Katherine Roche hopes she can now avoid drilling many of her patients' teeth.

A few weeks ago, the Edmonton dentist received her first shipment of a new, non-invasive treatment for tooth decay called silver diamine fluoride.

When applied to an affected tooth, the liquid treatment stops decay by killing cavity-causing bacteria, then remineralizes, or hardens, soft spots in the tooth, eliminating the need for drilling and filling.

So far, Roche has tried it on about a dozen patients, some as young as five. But she already believes it "really revolutionizes the care" for children, seniors and other patients who don't tolerate dental procedures well.

"You just paint it on like a little bit of varnish … no freezing and drilling. It takes a minute to apply this material," said Roche, owner of the Guardian Dental clinic.

Silver diamine fluoride has been used for years in Japan, Australia and Argentina. But only recently has it been approved in Canada, under the product name Advantage Arrest. Health Canada licensed Advantage Arrest in February to be used by dental professionals "to prevent, fight and protect against cavities or caries."

Until now, Canadian dentists have treated cavities by drilling away the soft, decaying areas of a tooth and replacing them with another substance, such as a composite or amalgam filling.

Silver diamine fluoride "is the easiest, simplest way to stop dental decay that has already started," said Benoit Soucy, the director of clinical and scientific affairs at the Canadian Dental Association.

But, he added, it's not for everyone – especially "anybody who is concerned about the appearance of their smile."

That's because the chief drawback of silver diamine fluoride is that it stains the tooth a dark brown or black.

It also does not fill in the parts of the tooth that have been corroded away, though a dentist can rebuild the structure of a tooth after the material hardens. And it isn't the best option when the decay is very advanced or when there is damage below the tooth, Roche says.

Moreover, any staining that occurs in their baby teeth will not affect their adult teeth.

Plus, it is less costly than traditional fillings. At her clinic, a silver diamine fluoride treatment is billed per unit of time. She can treat an entire mouth within 15 minutes, which she estimates would not cost more than $100. By comparison, filling a cavity would cost about $200.

Aside from the time and discomfort involved, fillings also don't do anything to address the bacteria that cause cavities. With fillings, "it's surgery versus medicine," Roche said.

But with silver diamine fluoride, the risk of developing new cavities throughout the mouth is reduced due to what's called the "zombie effect," she explained. "What happens is bacteria will take up the silver ions and they will go visit their other bacteria friends and they spread that silver ion around … and kill those bacteria as well."

A second treatment is recommended six months after the first.

Soucy emphasizes that people should not be scared off by the idea of staining if silver diamine fluoride is deemed the best approach for them. It can be regarded as a "necessary evil" for certain individuals, for whom the treatment can prevent major dental problems in the future, he says.

Even so, he says, he doesn't expect dentists to give up their drills any time soon.

"It will definitely not replace fillings," he said. "This is an additional tool that helps to treat certain, very specific situations that had no good options until now." 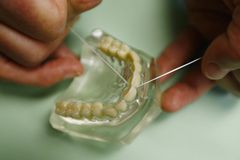 The baby boomers' stealth killer: hepatitis C
May 10, 2017
Follow Wency Leung on Twitter @wencyleung
Report an error Editorial code of conduct
Due to technical reasons, we have temporarily removed commenting from our articles. We hope to have this fixed soon. Thank you for your patience. If you are looking to give feedback on our new site, please send it along to feedback@globeandmail.com. If you want to write a letter to the editor, please forward to letters@globeandmail.com.
Comments