A three-part study under the direction of concussion specialist Paul Echlin of Burlington, Ont., found microscopic changes occur in the brains of young athletes who suffer concussions.

The study used advanced magnetic resonance imaging (MRI) techniques and found changes in the brain – microbleeding and what is thought to be inflammation – that would not normally be detected by the medical professionals who treat athletes for head injuries.

Echlin said this is further evidence that changes in the brain occur with the first head injuries suffered by athletes and that damage to the brain increases over time.

"This is demonstrating, definitively, that this is an injury to the microstructure of the brain, it occurred over time and it wasn't there before," the doctor said. "We want our kids to play [contact sports] but we have to look at change, substantial change, to the way we play to avoid these multiple hits to the head."

The independent study, known as the Hockey Concussion Education Project, was done in collaboration with a team from the Harvard University's medical school, Brigham and Women's Hospital in Boston, Boston Healthcare Associates Inc. and the University of Munich in Germany.

The three-part study, which is to be released Tuesday, followed 45 male and female hockey players between the ages of 19 and 26 from the Canadian Interuniversity Sport leagues in the 2011-12 season.

Each of the participants underwent MRI scanning with the advanced techniques at the beginning of the season, the end of the season, and in a series of tests following any diagnosed concussion – 72 hours, two weeks and two months after the injury. Eleven of the 45 players, five men and six women, were diagnosed with a concussion during the season.

The first part of the study, which detected microbleeding following head trauma, found that while the female players sustained a higher incidence of concussions, the men showed a "statistically significant" rate of microbleeding, while the women did not.

Echlin and two of his associates – Martha Shenton of Harvard Medical School and Brigham and Women's Hospital, and Inga Koerte of Harvard and the University of Munich – are not sure what to make of the gender differences.

While Echlin noted it could be because all of the men who suffered a concussion during the study had suffered previous concussions, compared to only half of the women. Shenton said it could also be because women's brains simply handle head injuries differently, and not enough is known about that subject. She also noted the study lacked a control group of athletes who only played non-contact sports.

The second part of the study looked at what happens to the white matter tissue, which transmits signals from one part of the brain to another, in the 72 hours after an injury. It was discovered that there is less room between the cells of the white matter, which indicates inflammation.

Finally, the third part of the study compared the MRI results from the beginning of the season to those at the end of the season. It was discovered that players who suffered a concussion during the study, as well as those who admitted to having previous concussions, showed microscopic changes to their brains, compared to those who did not have a history of concussions.

Shenton and Koerte both said the long-term implications of these changes requires further study, but both tend to agree with Echlin that the changes are troubling signs for young athletes.

"Having said that, not everyone who plays hockey or football and gets hit on the head ends up with any kind of CTE. Those are things people are looking into now – are some people more susceptible to long-term pathology?"

Echlin, who treats young amateur athletes, said the study shows the time for debating how head injuries should be handled in children's sports is over. It is now time to look at making them safer.

"It's unfortunate, but it's the way we play our games right now," he said. "With a lot of violence, and it's unfortunately modelled on professional athletes, which I won't go into.

"They had their chance to modify [their games] but they're selling a game of violence." 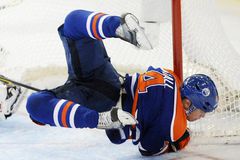