In the latest installment in the mammogram debate, a new study finds that getting a mammogram every other year instead of annually did not increase the risk of advanced breast cancer in women aged 50 to 74, even in women who use hormone therapy or have dense breasts, factors that increase a woman's cancer risk.

The findings, by researchers at the University California, San Francisco, support the conclusions of the U.S. Preventive Services Task Force, an influential government panel of health advisers, which in 2009 issued guidelines that said women should have mammograms every other year starting at age 50 rather than annual tests starting at age 40.

The controversial recommendations to reduce the frequency and delay the start of mammogram screening were based on studies suggesting the benefits of detecting cancers earlier did not outweigh the risk of false positive results, which needlessly expose women to the anguish of a breast cancer diagnosis and the ordeal of treatment.

The matter, however, is not settled. The American Cancer Society still recommends women be screened for breast cancer every year they are in good health starting at age 40, but the group is closely watching studies such as this.

"I don't think any one study ought to change everything," Dr. Otis Brawley, chief medical officer of the American Cancer Society, said in a telephone interview. But he added, "This is one of several studies that are all pointing in the same direction over the last several years."

Brawley said he did not expect screening recommendations from professional organizations to change in the next year, but he does see doctors moving toward a more personalized approach over the next five years. There may be some women who need to be screened every six months and others every two years depending on their breast density, family history and genetic testing.

In Canada, medical experts tend to recommend less screening than their counterparts in the United States. In 2011, the Canadian Task Force on Preventive Health Care said most women in their 40s should not have routine mammograms to look for signs of breast cancer. And women over 50 should wait up to three years between tests.

In the latest study, Dr. Karla Kerlikowske of the University of California, San Francisco, and colleagues wanted to see whether risk factors beyond a woman's age play a role in the decision of when to start mammogram screening.

In addition to age, the team considered whether women had dense breast tissue – which has a higher ratio of connective tissue to fat – or took combination estrogen and progesterone hormone therapy for more than five years, both of which can increase the risk of breast cancer.

"If you have these risk factors, would it help if you got screened annually vs. every two years?" said Kerlikowske, whose study was published online this week in JAMA Internal Medicine.

To study this, the team analyzed data from 11,474 women with breast cancer and 922,624 without breast cancer gathered from 1994 to 2008. Even after looking at these other factors, the team found no increased risk of advanced cancer in women 50 to 74 who got a mammogram every other year instead of every year.

"It didn't matter whether you screened that group every year or every two years, the risk of advanced disease or having a worse tumor was no different," Kerlikowske said.

Studies suggest a false positive can have lasting psychological effects. A March study in the Annals of Family Medicine said, "Three years after a false-positive nding, women experience psychosocial consequences that range between those experienced by women with a normal mammogram and those with a diagnosis of breast cancer."

Breast density was a factor in younger women, however. When the team looked at screening frequency in women 40 to 49, they found those with extremely dense breasts who were screened every other year had a higher risk of having a more advanced cancer than those who got screened every year. Younger women also were far more likely to have false-positive results and undergo unnecessary procedures.

Without getting a mammogram in their 40s, Kerlikowske said, "women aren't going to know if they have extremely dense breasts."

Among women in their 40s, about 12 per cent to 15 per cent have extremely dense breast tissue. For these women, Kerlikowske said she recommends that they get a mammogram if they have other risk factors that might put her at risk of breast cancer, including having a first-degree relative that a common term, or just "close relative"? such as a mother or a sister with breast cancer.

"Once we see their breast density is high, we will offer annual mammography," she said.

The American College of Radiology and the Society of Breast Imaging, groups that represent radiologists, said the study's methodology was flawed because it used early and late breast cancers to determine the outcomes of breast screening rather than more refined measures of tumor size, nodal status and cancer stage, which could determine whether screening detected cancers at an earlier stage.

It also faulted the study for not being a closely controlled, randomized clinical trial. The study used data from the Breast Cancer Surveillance Consortium, a national mammography screening database that gathers information from community mammography clinics on millions of women.

"We're never going to have a randomized study. This is the best in terms of the type of study anyone can actually hope for," said Brawley, whose group monitors scores of breast studies from around the world each year. He said such a study would take decades and would be prohibitively expensive.

Catching cancers earlier does not always translate into lives saved, according to a November study published in the New England Journal of Medicine by Dr. Gilbert Welch of the Dartmouth Institute for Health Policy & Clinical Practice in New Hampshire.

That study suggested that as many as a third of cancers detected through routine mammograms may not be life-threatening, contradicting the deeply ingrained belief that cancer screening is always good.

Kerlikowske said the strength of her study is that it allows researchers to consider other risk factors, such as breast density, allowing doctors to offer women personalized choices about when to start breast cancer screening.

"We're trying to move it away from this idea that it all should be based on age. There should be some thoughtfulness to it," she said.

To screen or not to screen? New evidence dials up mammogram debate, again
November 22, 2012 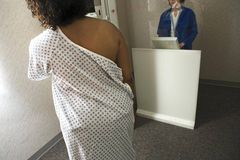 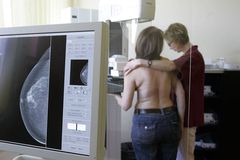