Immigrants to Ontario are 30-per-cent less likely to suffer a heart attack, stroke or other serious cardiovascular event compared to long-term residents, according to a new study that is adding more weight to the existence of a so-called "healthy-immigrant effect."

But the paper, published Monday in the journal Circulation, also found stark variations in the cardiovascular health of immigrant groups, with those born in South Asia faring the worst. And the longer immigrants spend in Canada, the more their heart health declines.

The study is notable because of how it was conducted: as a big data experiment. Researchers from Toronto's Institute for Clinical Evaluative Sciences and Sunnybrook Schulich Heart Centre used data from Citizenship and Immigration Canada's Permanent Resident database and linked it to nine population-health databases to analyze risk factors and cardiovascular events – such as heart attack and stroke – of more than 800,000 first-generation immigrants to Ontario. The researchers compared the information to more than five million long-term residents of the province, the vast majority of whom were white.

Overall, the immigrant groups were less likely to smoke, be obese, have high blood pressure, suffer from diabetes or have high cholesterol than long-term Canadian residents. Immigrants were also more likely to live in low-income neighbourhoods.

"I think overall the news is generally good for immigrants," said Dr. Jack Tu, lead author of the study and a senior scientist at ICES.

For years, research has suggested Canada is home to a healthy-immigrant effect, meaning newcomers to the country tend to be healthier than long-term residents. But other studies show the opposite may be true. For instance, a study published earlier in August in the journal BMJ Open found that certain ethnic groups – notably South Asian men and black men and women – experience type 2 diabetes, high blood pressure and obesity more than white Canadians.

But that study only looked at risk factors and didn't track individuals for years to see who eventually had a heart attack or stroke, Tu said. The new study results clearly point to a healthy-immigrant effect, he said. However, he noted there are major variations in the heart risks faced by various ethnic groups, which could help policymakers develop strategies to reduce the risks in those populations, he said.

Yet while Chinese and other East Asian immigrants had the lowest incidence of heart-related problems, the longer they were in Canada, the greater the risks. Specifically, East Asian men and women living in Canada for more than 10 years had a 40- and 60-per-cent increased incidence, respectively, of heart attacks, stroke and other cardiovascular problems compared to those who had been here less than 10 years.

Although there are some genetic factors involved, Dr. Chi-Ming Chow, a spokesman for the Heart and Stroke Foundation and cardiologist at Toronto's St. Michael's Hospital, said the lifestyle changes immigrants undergo are a major reason the healthy-immigrant effect dissipates with time. For instance, many newcomers may live in the suburbs where they rely on cars and walk less than before. Or they have to work longer hours, making it more difficult to eat healthy, home-cooked meals. Chow said many of his immigrant patients who have lived in Canada for more than a decade can't walk very far without getting winded.

"We all come to North America to look for a better life," Chow said. "You often pay for the dream if you don't look after yourself." 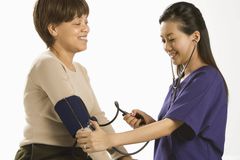