Most people know the golden rule of weight loss: The number of calories into your mouth in a day has to be smaller than the minimum number of calories you burn in a day. And it's because of this math – and all of the monitoring that goes with it – that many people can't follow what seems to be a basic rule.

I'm one of those people. I can't think of food as just a bunch of numbers: calories, percentage of daily required nutrients, weight in grams. I think about food as flavours and tastes. But I've come to realize that mastering your diet does require some complicated arithmetic.

With just a few clicks on a keyboard, the Internet can provide you with a flood of nutritional numbers all vaguely personalized to your current weight, height, age and nutritional goals. Within 15 minutes of poking around on Google, I had my body mass index (28.7, overweight), my basal metabolic rate (around 1,720 calories/day) and my "ideal" body weight for my frame (182 pounds).

These numbers have their skeptics, including Nirav R. Shah, who is now the New York State Commissioner of Health and penned a 2012 study outlining the flaws in using BMI as a grand determinant of health. His main argument: BMI can underestimate obesity because it doesn't account for gender or how muscle weight changes with age. Bottom line, BMI is not as accurate as many would believe.

I have my own reasons for being skeptical. I've known several people who have taken the seemingly innocent practice of counting calories and let it spiral out of control to the point of anorexia. One of my greatest fears in redefining my relationship with food is that I'll spend more time doing nutritional math than I will eating.

So instead of obsessing over the specific numbers, I've decided to focus on a more subjective element of food math: portion size.

It's no revelation that portions have ballooned over the decades. Nutritional researchers have long known that the bigger the portion size, the more likely you are to finish it and so the more you'll eat. Not surprisingly, inappropriately generous portions seem to be one of the culprits behind the Western world's obesity outbreak.

The key to portion control seems to be rejigging the way you perceive food. My best strategy, so far, has been called the plate model, which is basically using smaller plates or containers to serve my helpings. And for complete meals like dinner, I divide my smaller plates in sections and fill the bulk of it with vegetables and healthy proteins. These aren't earth-shattering ideas, and a lot of experts promote it, from trainers on The Biggest Loser to Michelle Obama. And for me, it's been effective so far.

For example, when I pack my lunch I've got three options for glass containers: one cup, one quart and something massive, which I never pick. I used to consistently stuff my leftovers into my one-quart tub, often filling it to the top. But since switching to the smaller option, I realized that I never needed that much food to feel full. The smaller portion size did not result in my worst nightmare: roaring hunger in the middle of the workday.

And while this has worked for me, there is a warning to be had with this portion-control trick. A 2013 study in the Journal of Human Nutrition and Dietetics concluded that if the same amount of food was served on a big plate and a small plate, most people would judge the amount of the large plate as a bigger helping of food. Meaning that sometimes, the small plate strategy actually tricks our brains into thinking we've cut back on our portions even when we haven't.

But nutritional scientists have other ways of reforming our understanding of portion sizes.

A 2013 study from Wageningen University in the Netherlands showed that taking larger sips of soup actually led to eating more calories but thinking you've eaten fewer. The better way to manage calories was to take smaller sips.

The problem? When participants were asked to take "natural sips," researchers found people had a tendency to take big gulps, shifting the burden of portion control from perception to reworking the mechanics of how we eat. So far no word on how this can be applied to Big Macs.

But even measuring gulps, sips and nibbles can be a lot of math to manage. So I'm thinking about getting a scale after all. That way, I don't have to count calories but I can have accurate numbers to help me eyeball when I'm able to measure my food. Then I'll just have to hope my nutritional math skills prove stronger than my ability to do calculus.

Use a measuring cup or spoons for two weeks. Learn what one cup of cooked pasta, one cup of breakfast cereal and three ounces of cooked chicken looks like on your plate. Eventually you'll learn what an appropriate portion size is just by looking and you won't need to measure. But because portion sizes can easily creep up over time, I recommend that you refresh your memory every so often by measuring your foods.

Read labels on food packages to become familiar with serving sizes of your favourite brands of cereal, crackers, soup or even salad dressing. The numbers on the Nutrition Facts box – the calories, grams of fat, protein, sugar, fibre and so on – apply to one serving of the food. If you eat two servings, then double the numbers. You might be surprised to learn that one serving is much less than what you're used to eating.

Don't snack directly from the package. To see how much you're eating, measure out one serving and put it on a plate. Read the Nutrition Facts box to learn how many crackers, potato chips, cookies and so on equal one serving. 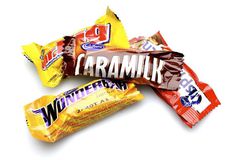 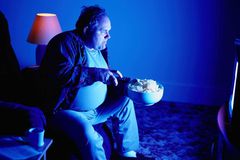 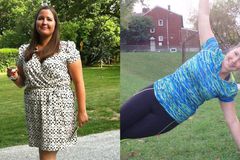