An Ottawa couple is arguing before the Ontario Human Rights Tribunal that the province's new fertility funding program is discriminatory. They are requesting that a complaint they first brought forward in 2009, which was put on hold while the government revamped its funding, be allowed to proceed to a hearing.

"They got rid of an old discriminatory policy and replaced it with a new discriminatory policy," says Amir Attaran, a law professor at the University of Ottawa, who, together with his wife, Ana Ilha, made the complaint. Attaran, who was invited to sit on the government's expert panel for the funding rethink, says he warned them of this problem.

Ontario's new Fertility Program, introduced a year ago, offers each eligible resident one funded round of in vitro fertilization (IVF) per lifetime.

According to the Ontario Human Rights Code, the province cannot arbitrarily discriminate in the delivery of its services.

But the couple say that they continue to face discrimination. Their 2009 complaint argued discrimination on the grounds of disability, since the government would only pay for IVF in cases of blocked fallopian tubes, and not in cases of, for instance, premature ovarian failure, which Ilha was diagnosed with. But whereas before Ilha had the wrong form of infertility, now she's too old.

That is, she's too old for a woman.

Under the new program, a woman can be no older than 42 years and 364 days. Ilha is 44. However, a man that age – or any age – would be eligible, points out Attaran.

Men, at any age, can use their round of government-funded IVF in conjunction with an egg donor and a surrogate. Women older than 43 cannot. That is sex discrimination, they say.

According to Dr. Arthur Leader, the couple's fertility doctor and also a member of the expert panel, women cannot even use eggs or embryos they froze prior to the age cutoff; Ilha froze hers when she was 39. That is age discrimination, the couple argues.

At a preliminary hearing with the Human Rights Tribunal last month, the government's lawyer, Zachary Green, argued that Ilha's and Attaran's case should be dismissed.

The specific regulation they were complaining about, he said, has been repealed and replaced. "The legal substratum of the case has disappeared," he said.

But Attaran countered that they continue to be denied funded IVF services for grounds that are protected under the code. "The excuse for denial has changed," he said, "but the controversy is the same."

The new program is "an onion of discrimination," said Attaran. "Each layer causes more tears as it's peeled." Green did concede that, if the new program is as discriminatory as they suggest, they, or someone else, could bring forward a fresh complaint.

Public documents show that several others had filed applications about the old law, but according to Green, they have all now settled or withdrawn their complaints. Ilha's and Attaran's case is the only one unresolved, he said, though the government did reach a financial settlement with the couple in 2014. Ilha and Attaran now have two children, after eight rounds of IVF.

A decision on whether the complaint can move forward is expected any time. 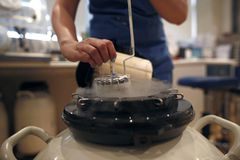 Why I carried a baby for someone else: Three surrogates share their stories
February 28, 2016
How a micro-preemie survived birth at one pound
September 9, 2016
Follow us on Twitter @globeandmail Opens in a new window
Report an error Editorial code of conduct
Due to technical reasons, we have temporarily removed commenting from our articles. We hope to have this fixed soon. Thank you for your patience. If you are looking to give feedback on our new site, please send it along to feedback@globeandmail.com. If you want to write a letter to the editor, please forward to letters@globeandmail.com.
Comments