Today, about 100 Canadians will die as a result of smoking. Tomorrow, it will be another 100. And it will be that way, every day, for the foreseeable future.

Governments, public-health experts, family members, not to mention smokers themselves, want those numbers to change. While the country's overall smoking rate is down sharply from what it was 50 years ago, the number of Canadians who light up remains stubbornly high.

About 16 per cent of the population, or nearly five million Canadians age 15 and older, smoke on a regular basis, and those numbers have remained pretty much unchanged for the past few years. Of those, 90 per cent want to quit, according to a 2008 report from the Canadian Lung Association. But, as anyone who's wrestled with the addiction will attest, quitting isn't easy.

So shouldn't they have every possible weapon in their arsenal to help?

Not according to the federal government.

Electronic cigarettes – battery-powered devices that vaporize liquid nicotine – may help some die-hard smokers quit, or at least reduce their exposure to the dozens of deadly toxins found in traditional cigarettes.

In Canada, there are no e-cigarettes with nicotine approved for sale, which makes the sale and advertisement of them illegal. Unlike nicotine-replacement products, such as gums or lozenges, e-cigarettes mimic the look and feel of traditional cigarettes and the experience of smoking.

The evidence backing e-cigarettes as an effective cessation or harm-reduction device is mixed, and more rigorous study is needed to figure out how well the products work at helping people quit tobacco-based cigarettes, and whether inhaling vaporized nicotine causes any long-term health effects.

At the same time, there is real – and legitimate – worry that e-cigarettes, available in dozens of candy and fruit flavours, could be a gateway for teens who will then graduate to the real thing.

Despite these lingering questions, more tobacco-control experts are embracing the idea that e-cigarettes may have a crucial role to play in reducing smoking rates and want them to be available on a restricted basis in Canada, to keep them out of the hands of minors. In August, the World Health Organization called on governments to prohibit e-cigarette advertising to minors and to ban them from being used indoors. The American Heart Association made a similar recommendation regarding minors.

The U.S. Food and Drug Administration announced earlier this year that it would regulate e-cigarettes in a similar manner to tobacco-based cigarettes, including a ban on sales to minors. The rules will also require scientific evidence if companies want to market their e-cigarettes as a healthier alternative.

Here in Canada, the Non-Smokers' Rights Association has taken a bold stand, saying the federal government should make nicotine-based e-cigarettes available. They want regulations to specify what can go into e-cigarettes – for instance, the standard amount of nicotine they should contain – as well as rules to prohibit sales to minors and advertising of the products.

"There is no way that e-cigarettes can be as harmful as cigarettes," said Melodie Tilson, the association's policy director. "Why not have a product available that could help smokers cut down and quit?"

In Canada, despite the fact that no nicotine e-cigarettes have been approved, it's easy to find nicotine cartridges in convenience stores or online. The lack of enforcement of rules, or creation of a clear policy, has put Canada in a regulatory vacuum that has left us with the worst of both worlds: no regulation on the sale or advertisement of e-cigarettes to minors and no mandated quality controls on the products themselves.

"There is a role for both Health Canada and provincial governments to regulate, and governments need to move forward on this," said Rob Cunningham, senior policy analyst with the Canadian Cancer Society.

Eric Morrissette, a spokesman for Health Canada, said the department has no plans to do anything about e-cigarettes.

That is too bad, because like it or not, they are here to stay. And without rules in place, Canadians, young ones in particular, are vulnerable. Research from the Canadian Cancer Society in Quebec shows that one in three high school students have tried e-cigarettes.

There's a reason that Big Tobacco has been busy buying e-cigarette companies or creating brands of their own, and it's not out of the goodness of their corporate hearts. There's ongoing speculation as to whether those companies are using e-cigarettes to broaden the market for tobacco products, or if executives recognize the industry is dying and see e-cigarettes as the way to keep the next generation hooked on nicotine.

By staying on the sidelines and refusing to regulate the content, sale and advertising of e-cigarettes, Health Canada is squandering an easy opportunity to become a leader on an important public-health file. 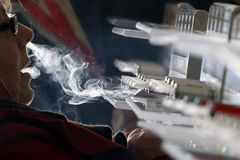 Are e-cigarettes about harm reduction, or greater harm?
May 12, 2018 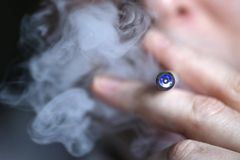