That's the only rational response to news that a) a private company plans to set up shop in Toronto to buy blood plasma and; b) it is perfectly legal for them to do so.

Have we already forgotten the tainted-blood tragedy – a debacle that left more than 20,000 Canadians infected with HIV and hepatitis C, and that has cost taxpayers more than $5-billion in compensation?

One of the many things that contributed to that public-health disaster was the use of blood from for-profit blood brokers – who purchased the products in places like Haiti, skid row in Los Angeles, Arkansas prisons and Russian funeral homes, at the outset of the AIDS pandemic, no less.

But the overriding reason that Canada suffered the most damage per capita worldwide from tainted blood was a shocking lack of transparency and oversight.

And now we're getting another heaping tablespoon's worth.

That a company can hang up a shingle – beside a homeless shelter, no less – and start collecting and selling blood without prior public consultation and without informing Canadian Blood Services or provincial health authorities is evidence of a glaring legal loophole and a public-policy failure.

(The new company, Canadian Plasma Resources, http://www.giveplasma.ca, owned by Exapharma Inc., http://www.exapharma.ca, does need to be licensed by Health Canada but that is strictly a technical issue about the quality of equipment and procedures.)

If there is one lesson we can take from our inglorious history in blood collection and distribution it is that lax regulation and bureaucratic blandishments kill.

If we're going to do this – allow paid blood donations on a large scale – then let's hash it publicly first, let's debate the pros and cons instead of shrugging our shoulders and assuming it doesn't matter.

Will paid blood donations undermine the volunteer donation system? Despite all the testing, is paid blood as safe as volunteer blood? At the very minimum, those questions have to be answered before for-profit clinics are licensed.

Currently, the Canadian blood system is run by two independent agencies, Canadian Blood Services (www.blood.ca) and Héma-Québec (http://www.hema-quebec.qc.ca/hema-quebec/index.fr.html), and they collect, respectively, 850,000 and 160,000 units of blood a year, all of it from volunteer donors. (The Canadian Red Cross blood-services division carried out this role for decades but it was bankrupted, morally and financially, by the tainted-blood tragedy.)

CBS and Héma-Québec have both said firmly they have no plans to buy plasma from paid donors. But a spokesman for Canadian Plasma Resources said they are confident that will change. If not, the company will either get the plasma processed itself and sell the blood products like other suppliers, or it will sell the raw plasma in the U.S. or Europe.

There are three principal components in blood: red cells, plasma and platelets.

Plasma, a thick straw-coloured part of blood, is essentially liquid gold. It can be broken down into a variety a specialized drugs like clotting products for hemophiliacs, albumin used to treat burn victims and intravenous immunoglobulin (IvIG), used to treat a variety of immune deficiencies.

But IvIG, a drug that costs a small fortune, is also showing promise in the treatment of Alzheimer's, meaning demand is set to soar.

That is the reason that entrepreneurs want to buy plasma from Canadian homeless people and students at $20 a pop. And, while you can donate blood only every 56 days, you can donate plasma weekly.

What we need to understand to have a reasoned debate, however, is how the market for plasma is changing. In Canada, most donors give whole blood, and plasma is extracted. In addition, there are about 6,000 plasma-only donors, most of whom give weekly.

The demand for plasma has actually fallen considerably in recent years, largely because hemophiliacs now use recombinant (synthetic) clotting products. At the same time, the demand for components of plasma like IvIG is way up. To manufacture IvIG you need to pool parts of plasma from thousands (and sometimes tens of thousands) of donors. Canada does not have the supply or the manufacturing capability to do so.

As a result, CBS and Héma-Québec buy these products in the United States and Europe, and they are made, in part, from paid blood donations.

There is also a small company in Winnipeg, Cangene BioPharma Inc. (www.cangene.com) that has paid plasma donors for decades. However, most of their donors have a rare peculiarity, Rh-negative blood, and they produce antibodies used to create a lifesaving Rh immune globulin medication.

All this to say that we don't need a blanket ban on paid blood (or plasma) in Canada. But we should restrict payments to "rare circumstances," to quote Justice Horace Krever, who headed the tainted-blood inquiry (http://publications.gc.ca/site/eng/72717/publication.html. What we do need is a blood system where decisions are made openly and rationally, one in which public safety always trumps commercial activity, lest we wish to repeat ignoble history.

It's time we broke the silence about hepatitis, the quiet killer
May 19, 2010
Tainted-blood compensation incomplete as deadline nears
June 29, 2010 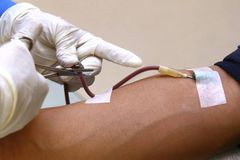 The deadly tainted-blood scandal is more shameful than Adscam
April 21, 2005
Voluntary rules would standardize blood system
September 22, 2004
Red Cross loses blood appeal
April 19, 2001
Follow André Picard on Twitter @picardonhealth
Report an error Editorial code of conduct
Due to technical reasons, we have temporarily removed commenting from our articles. We hope to have this fixed soon. Thank you for your patience. If you are looking to give feedback on our new site, please send it along to feedback@globeandmail.com. If you want to write a letter to the editor, please forward to letters@globeandmail.com.
Comments