Come May 31, vapers won't be able to use electronic cigarettes in indoor public spaces in Nova Scotia.

Nova Scotians under the age of 19 will be barred from purchasing e-cigarettes.

And the same regulations that apply to cigarettes sales – no displays in stores where minors can shop – will also pertain to the cigarette substitutes.

Nova Scotia will become the first province to regulate the burgeoning use of e-cigarettes, but it won't be alone for long. British Columbia, Ontario and Quebec are in the process of passing legislation and several other provinces have indicated they plan to as well.

A small but growing list of municipalities has instituted rules limiting e-cigarette use in public spaces (Vancouver) or municipal offices (Toronto). And businesses, especially in the transportation sector, have moved to prohibit use of the devices.

But as e-cigarettes have gone from niche to mainstream, Health Canada – which many people feel should lead the charge to establish Canadian rules – has so far been silent. Other levels of government have decided they simply cannot delay any longer.

"It would have been, from my perspective, more effective if we'd been able to move forward in a co-ordinated fashion. But we can't afford to sit and wait for the feds to figure out where they're going to go," says Dr. Robert Strang, Nova Scotia's Chief Medical Officer of Health.

With a federal election slated for the fall and Parliament's summer break mere weeks away, it seems clear the legislation Strang and others are looking for will be a job for the next federal government.

David Hammond, a public health professor at the University of Waterloo in Waterloo, Ont., says e-cigarettes have created a quandary for Health Canada.

"They appear to be frozen," says Hammond, whose research focuses on tobacco control, harm reduction and, in recent years, e-cigarettes.

"I think they're absolutely twisted in knots about this. Most regulators are."

In fact, the products pose a legal and ethical challenge, not only for Health Canada but all involved in the public-health movement that has, over decades, succeeded in driving down smoking rates by limiting how cigarettes can be packaged and sold and where they can be smoked.

Some anti-tobacco advocates want e-cigarettes to be treated exactly like cigarettes. They argue the devices perpetuate nicotine addiction, may entice teens to take up smoking and could undermine the hard-fought smoking bans.

"Smoke-free places are a great motivator for people to quit. And if you were to undermine that, then you undermine the benefits of one of the key tobacco-control strategies," says Rob Cunningham, a senior policy analyst for the Canadian Cancer Society.

But other anti-tobacco proponents see the devices as an opportunity to get hardcore smokers to stop consuming nicotine in a way that endangers their health and the health of those around them.

"I'm very big on the idea of alternative nicotine and I see electronic cigarettes … as an indication of where we could go," says David Sweanor, a University of Ottawa law professor who has worked for years in tobacco control.

The potential promise and perceived perils of e-cigarettes have driven a huge wedge through the anti-tobacco community.

"There are bitter divides in terms of people's opinions," says Hammond.

"They still share the same goal. It's actually just that people think that these products are going to push the needle in different directions."

The legal status quo in Canada is this: E-cigarettes that are sold with e-juice containing nicotine, or which make health claims, fall under the Food and Drug Act, Health Canada says. That law requires Health Canada's approval to import, advertise or sell these products. And to date, Health Canada has not approved a single e-cigarette.

So, in theory, it should be impossible to buy e-cigarettes with nicotine-containing e-juice in Canada. There's a lot of daylight between theory and reality, however.

"You can [find them] down any main street," says Hammond. "I've got one [store] about 100 metres from my office. They're selling nicotine containing e-juice."

Health Canada may be working on new rules for e-cigarettes. (The Canadian Press asked the department for an interview on the issue, but received written answers to questions instead.)

The committee's report, written after a series of consultations, was issued March 10. It recommends the federal government establish a new legal framework for e-cigarettes, sold with or without nicotine e-juice.

It recommends banning sales to minors, prohibiting use in federally regulated public places, restricting advertising of the products, barring the sale of e-juice flavours – such as candy flavourings – aimed at the youth market, and establishing limits on how much nicotine e-juice can contain.

"This parliamentary report, I think for the first time, will require them to be explicit, not just about their current position but potentially where they might go. And that, I think, would benefit everybody," Hammond says.

Under parliamentary rules, Health Canada must respond to the report within 120 days, which means by July 8. If Parliament has already broken for the summer, the response must still be tabled in July.

But as one old parliamentary hand notes, some government responses to reports are more detailed than others. With the legislative stasis that accompanies the run up to elections, Health Canada may not feel compelled to tip its hand at this point.

"From my perspective, we need to be acknowledging the risks and benefits of these products and creating some appropriate regulatory environments. And the sooner we do that, the better."

As the country waits for Health Canada to weigh in, the rules on e-cigarette use continue to evolve. Here is a partial list of places and business sectors that have created rules to limit e-cigarette use:

Transport Canada says e-cigarettes should not be packed in checked luggage, but it leaves it to individual airlines to set policy on the use of e-cigarettes in flight. Airlines have generally adopted no-vaping-on-board policies.

Via Rail bans the use of e-cigarettes on its trains. Likewise, e-cigarette use is not allowed on Greyhound buses.

Nova Scotia's soon-to-be-enacted law bans the use of e-cigarettes in vehicles when children and teens under 19 are being transported. Ontario's proposed legislation prohibits e-cigarette use in cars transporting anyone under the age of 16.

Provinces that have drafted e-cigarette legislation are essentially treating the devices like cigarettes. Anywhere cigarettes cannot be smoked, e-cigarettes will also be prohibited.

The pending Ontario legislation specifies use of the devices will be prohibited in daycares, schools, universities and workplaces.

Quebec's e-cigarette legislation, which was tabled last week, applies the same restrictions on vaping in public as the rules for smoking in public. It also extends the ban on smoking (and vaping) in restaurants and bars to their patios as well. 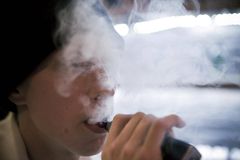 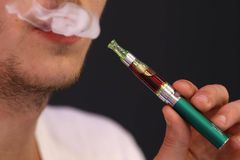 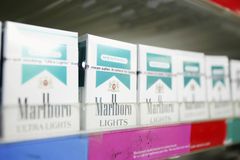