Vision loss is a scary – but very real – prospect for many Canadians. Age-related macular degeneration, also known as AMD, is the leading cause of vision loss in Canadians 50 and older; it currently affects more than one million people in this country. It occurs when cells of the macula, which is responsible for central vision, start to deteriorate and can't function as well. Although the exact cause isn't known, age, smoking, family history and gender (women are more likely to get the disease) are common risk factors.

If you're at, or approaching, the age when AMD becomes a concern, there's a good chance you've noticed a growing number of advertisements for vitamins and supplements that claim to prevent or help treat the disease.

There's good reason to be excited about the use of supplements to treat macular degeneration. A large, credible study found that a certain combination of antioxidants and vitamins can help slow down progression of the disease among those who have moderate AMD or those with advanced AMD in one eye, but not the other.

But there's also good reason to be cautious. Despite the optimistic assurances on websites, TV commercials and other promotional materials, there are limits to what these supplements can do. Unless consumers are careful, they could be wasting their money.

"It's turned into a big market," said Dr. Farzin Forooghian, clinical assistant professor in the department of ophthalmology and visual sciences at the University of British Columbia. "A lot of patients are misled and there's a lot of misinformation."

There are two types of AMD, known as wet and dry. Wet is the less common, more severe form of the disease and can be treated with eye injections.

The dry form of the disease is much more common, but historically, there have been no effective treatments. In 2001, however, U.S. researchers published the landmark Age-Related Eye Disease Study (AREDS) that would help change that. They found that patients who took a supplement containing high levels of vitamin C, E, beta carotene and other vitamins lowered their risk of entering the advanced stages of AMD by about 25 per cent.

"Their findings overall have been very well accepted, I think, throughout the world," said Dr. Kevin Gregory-Evans, professor of ophthalmology and Julia Levy B.C. Leadership Chair in macular research at the University of British Columbia. "People think there is a role for dietary supplements in inhibiting the progression of AMD."

Many companies responded to the study by marketing formulations based on the one used the AREDS study, including Bausch + Lomb, which worked on and provided funding for the original research. Ophthalmologists commonly tell patients at risk of developing advanced AMD that they should take the supplements.

"There's a clear benefit to it," said Dr. Andreas Lauer, chief of the Vitroretinal Division and director of the ophthalmology residency program at Oregon Health and Science University's Casey Eye Institute. "You can slow the progression with those supplements."

But experts say it's important not to overstate what the supplements can achieve. The products provide some benefit to people who have already experienced some vision loss, and can also help those with advanced AMD in one eye, which severely reduces their vision, but not in the other eye.

There's no scientific evidence that supplements can actually cure AMD or stop it from developing. But that hasn't stopped companies from coming out with products that promise to do just that. For instance, Vitalux Healthy Eyes sells a supplement for adults over 50 to "reduce the risk of developing AMD and maintain overall good health." Bausch + Lomb sells Ocuvite Adult 50+ to "replenish the vital nutrients your eyes can lose as you age."

Alcon, a division of Novartis that markets Vitalux, did not provide a spokesperson to answer questions. Bausch + Lomb did not respond to an interview request.

There are plenty of other supplements on the market that try to tap into the fear of vision loss. Some of the products are based on the AREDS formula, but don't contain the same dose of vitamins used in the original research trial.

"By changing the formulation slightly, you could actually be losing the benefit you would have gained," said Gregory-Evans.

Others contain some of the AREDS vitamins as well as other ingredients, notably lutein, omega-3 and zeaxanthin. There is considerable interest in those three ingredients because a new trial is under way that is testing their effectiveness in addition to the original AREDS formula. The results of that trial aren't expected until June.

Part of the problem is that vitamins, supplements and other natural health products don't require the same level of proof that they are effective before they can be approved for sale. And while companies aren't allowed to make false claims on natural health products, there is no enforcement of that rule currently in Canada.

"It's kind of a crazy world out there in terms of supplements," said Lauer. "You can market and sell vitamins with modest regulatory oversight."

Even if they are taking the AREDS formula, AMD patients need to be careful. High doses of some vitamins may be linked to some serious problems or interfere with other health conditions or medications. For instance, some studies have linked high levels of vitamin E to prostate cancer and early death. And smokers must be cautious because the beta carotene found in the AREDS formula may increase the risk of lung cancer.

If you have macular degeneration, speak to your ophthalmologist about whether supplements are appropriate. If you plan to take a supplement, carefully read the label and double check to make sure it employs the formulation used in the original AREDS trial. And even if the marketing pitch sounds great, don't get taken in by claims that simply aren't backed by science.

Patients with macular degeneration must rely on pricier of two drugs
June 12, 2011 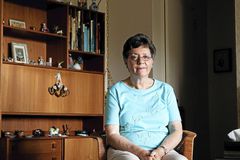 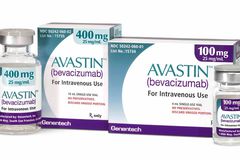 New drugs saving vision of patients with AMD
October 3, 2006
Follow Carly Weeks on Twitter @carlyweeks
Report an error Editorial code of conduct
Due to technical reasons, we have temporarily removed commenting from our articles. We hope to have this fixed soon. Thank you for your patience. If you are looking to give feedback on our new site, please send it along to feedback@globeandmail.com. If you want to write a letter to the editor, please forward to letters@globeandmail.com.
Comments