Social media has been buzzing over a study that found a new type of male birth control is highly effective, but that had to be stopped early because men couldn't take the mood swings and other side effects of the treatment.

This is a gross oversimplification – not to mention misrepresentation – of the facts behind what is actually a very important study that one expert says could open the door to better contraceptive options for men.

The study, published last week in the Journal of Clinical Endocrinology and Metabolism, looked at whether a combination of injectable hormones could suppress sperm production in men and prevent pregnancy. Every eight weeks for up to 26 weeks, 320 men received two injections: 200 milligrams of norethisterone enanthate, a long-acting progestogen, and 1,000 milligrams of testosterone undecanoate, a long-acting androgen.

The men provided sperm samples and once the levels were below one million per millilitre in two tests, they were told to rely only on the injections for birth control. For most men, they reached the suppression target within 24 weeks. They continued receiving injections as the study progressed.

The injections were highly effective. About 96 per cent of the men who received continuous injections had sperm levels at or below one million per millilitre. Four pregnancies occurred in total, which equals a pregnancy rate of 1.57 for every 100 individuals receiving injections, rates similar to what's seen in other contraceptive methods, such as the birth control pill, the study authors noted.

There were 1,491 adverse events reported during the study. Of those, researchers determined 38 per cent were not related to the treatment the men were receiving. A number of other side effects, including pain at the injection site, mood disorders, increased libido, mood swings and muscle pain were likely related to the treatment. Nearly all of the side effects were mild or moderate in nature.

Eight of the men in the trial did not see a return to their normal fertility levels within one year.

Throughout the trial, an independent data safety and monitoring committee followed the findings to look for any potential problems. That panel reviewed the data and determined "the study met all the criteria for continuation."

But a second peer review panel from the WHO's department of reproductive health and research looked at the same data and "determined that, for safety reasons, recruitment should be stopped and enrolled participants should discontinue receiving injections," according to the study.

That doesn't mean this new contraceptive method is inherently dangerous and is being shelved. While there was a concern over the rate of mild to moderate side effects, there are a number of other factors at play that need to be addressed. For instance, the researchers noted that 62 of the 65 emotional disorders were all reported at the same study site in Indonesia, as were many of the reports of injection site pain and muscle pain. (The study took place at 10 different locations, including Australia, Germany, Italy and Chile.) So could there have been a problem at the Indonesia study site that needs to be addressed?

Ethically, it's not possible to do a birth control study using a placebo group. So it's simply not clear whether this new male contraceptive method is, in fact, too risky, the study says.

Most of the study participants felt that this method of birth control could work for them. In a questionnaire during the recovery phase of the trial, about 82 per cent of men and 80 per cent of women said they were satisfied and would consider using this form of birth control.

Keith Jarvi, director of the Murray Koffler Urologic Wellness Centre and head of urology at Toronto's Mount Sinai Hospital, said he thinks the results of the study are impressive and could open the door to an important new birth control option for men. The high rate of sperm suppression and the low pregnancy rate seen in this study is something researchers have been pursuing for years, he said.

"The side effects [were] not necessarily unexpected," he said. "It works. It is quite effective. There were failures, which is expected, but now they recognize it works well."

Just like any new treatment, more work needs to be done to determine what the real risks may be to men and how to "fine-tune" the formula to reduce the potential for harm, Dr. Jarvi said.

The study authors also say more research will need to be done before this treatment moves forward. But it's clear that this study is generating considerable excitement.

Besides the possible side effects, other questions need to be looked at, such as whether receiving injections every two months is something men will be willing to accept. Dr. Jarvi said that based on his patients, "I'd say this is an acceptable form of birth control."

There is also a small possibility that the treatment won't be reversible in some men, which could stop some men from taking it, Dr. Jarvi said. On the flip side, men who may be considering a vasectomy may see this as a great option, he said. 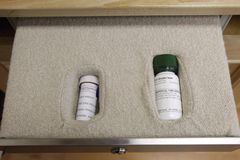