Eugene Melnyk's life was saved when he received a partial liver transplant in May, 2015, from an anonymous living donor. Now the owner of the Ottawa Senators is hoping to help others.

On Wednesday Melnyk announced the launch of the Organ Project, which aims to shorten the waiting list for patients requiring an organ transplant. One of its first steps is to encourage people to register as donors.

A primary obstacle to getting more people to register is "just getting the word out," Melnyk said. "It's two minutes out of your whole life. Just sit down [to register] and you will do the greatest things for people like me, who have sat in that line for months, not knowing if I'm going to be living or dying. It makes all the difference," he said, noting he now feels "150,000 per cent better."

About 4,600 Canadians are currently waiting for an organ transplant, according to the Canadian Blood Services.

While some opinion polls have shown 90 per cent of Canadians support organ donation, less than 20 per cent actually take steps to become donors.

To tackle the immediate problem of not enough donors, the Organ Project is starting out with an awareness campaign, which will include social media, billboards and commercials produced pro bono by top creative artists, Melnyk said. He said he also hopes to rely on the hockey community to help spread the word. And the foundation is hosting a fundraising gala in Toronto next month.

As a non-government charity, Melnyk said, the Organ Project can be more aggressive in its advertising and promotion. "We can use every type of angle that brand managers use in promoting their products."

The Organ Project is working with various transplant agencies to identify practical solutions that would make the donor registration process easier, said Laryssa Waler Hetmanczuk, the communications lead for the charity. Measures such as an opt-out system, whereby consent is presumed, have generated great interest, she said, but such a system would need to be fleshed out and examined further to see if it would work in Canada.

"If we can help identify ways to streamline the registration process, we think that would be beneficial," she said.

The project is also interested in advances in transplant technologies, including organ preservation techniques, Waler Hetmanczuk said. This may involve funding research, she added.

In Melnyk's case, a donor was found after a public appeal was made on his behalf at a news conference and through his hockey team's social media accounts. More than 2,000 people responded to the call to donate part of their livers. Although only a fraction were screened as potential donors, Melnyk said many of the 20 individuals who were identified as a possible match agreed to stay on as potential donors for others on the list and ended up saving "quite a few" lives.

Those involved in the Organ Project have not yet discussed whether it would make public appeals on behalf of individuals, but they have talked about helping patients with their own advocacy efforts, Waler Hetmanczuk said. "It's not something we're doing right now."

While the initial phase will focus on deceased donors, the next phase will encourage people to consider live donations, Melnyk said.

"It's got to be the most rewarding experience possible," he said. "It's the ultimate gift."

Toronto doctors kept woman alive for 6 days without lungs, saved her life
January 25, 2017
Social media can open the door to organ donations. But are we bypassing those most in need?
June 28, 2015 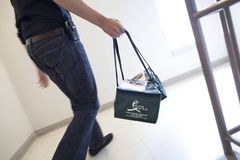