Every time the power cut out, the babies’ lives were endangered. At the children’s hospital in Jinja, Uganda, where pediatrician Michael Hawkes was conducting research, power failures occurred two or three times a week, sometimes up to 12 hours at a time.

The hospital would go dark and the electricity-powered oxygen concentrator would shut off, cutting off the oxygen supply to Hawkes’s tiny patients suffering from respiratory illness.

“Some, especially the little babies, could even die before your eyes when the power went out,” says the clinician-scientist and associate professor at the University of Alberta’s division of pediatric infectious diseases, who worked in Uganda from 2011 to 2013. “Especially when you have pneumonia, you can literally die within minutes without oxygen.”

Hawkes wanted to find a solution. So he devised a way to run oxygen concentrators, which are machines that separate oxygen from ambient air, by using solar power instead of the unreliable electric grid. He adapted the machines to run on solar panels and batteries charged by solar panels.

Hawkes set up his oxygen-delivery systems at two Ugandan hospitals with the help of a $113,000 grant from Grand Challenges Canada, a federal government initiative to support global health research. He is now aiming to bring them to 80 hospitals across the east African country.

A pilot study, the results of which were published in May in The International Journal of Tuberculosis and Lung Disease, demonstrated the use of the solar-powered machines to treat an initial 28 children with pneumonia at hospitals in the city of Jinja and the remote town of Kambuga. 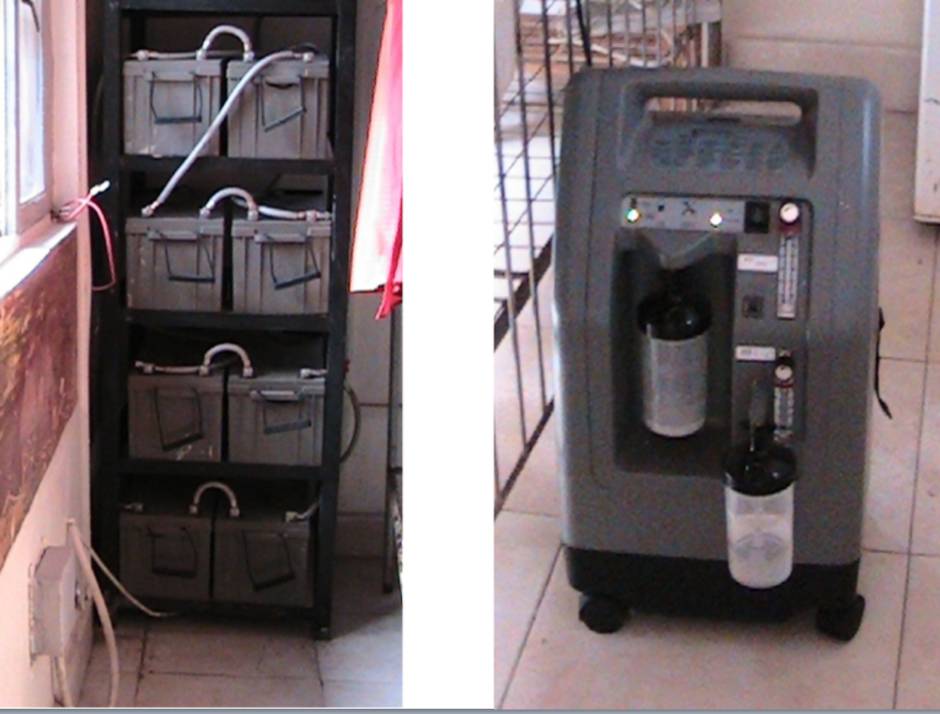 A tower of solar-powered batteries (left) powers this oxygen concentrator (right). This device will assist doctors who need the machines in regions where power is unreliable.

At each location, 25 solar panels, each roughly one metre by half a metre in size, were installed on the hospital roofs. The panels are used to charge eight batteries that can keep a single machine running continuously overnight. Each machine is able to provide the oxygen needed to treat two children at a time.

Six of the 28 children in the pilot study died. Hawkes says the deaths point to the dangers of severe pneumonia, particularly in areas without medical interventions such as intubation. Pneumonia is the leading killer of children under the age of 5 globally, he says. Concentrated oxygen is often necessary for young patients while they are treated with antibiotics.

Nevertheless, Hawkes says he and his team were able to show that the oxygen levels in their patients’ blood increased with the use of the solar-powered oxygen concentrators. In a follow-up randomized study, the researchers compared solar-powered oxygen systems to oxygen tanks, which, though effective, can be cumbersome to transport and keep refilled in remote areas. They found that the efficacy and mortality rates of the two types of oxygen supply were comparable.

Each solar-powered system cost $15,000 (U.S.), which Hawkes notes is a relatively large initial expense. However, he says, little maintenance is required. The systems at the Jinja and Kambuga hospitals required no maintenance over more than 18 months. And because the solar panels and oxygen concentrators are obtained from distributors in Uganda, the hospitals are able to rely on local expertise to fix the equipment and supply parts as necessary.

“Over all, [it’s] quite a convenient system and it worked quite well,” he says.

Hawkes says he is now working with Grand Challenges Canada, the U.S.-based Clinton Health Access Initiative and Uganda’s Ministry of Health to expand the use of the solar-powered oxygen-delivery system nationally.