A study published this week concludes that food manufacturers are still loading bread, canned food, dressings and packaged food items with way too much sodium. Two major industry groups representing food companies say the study shows that the plan to reduce sodium in packaged food is working. Which version is accurate?

Canadians consume too much salt – roughly 3,400 milligrams a day. The maximum daily cap the average adult is supposed to stay below is 2,300 milligrams. About 80 per cent of the sodium we consume is already in our food when we buy it, meaning that short of making everything from scratch, it's difficult for most Canadians to substantially reduce their sodium consumption on their own. Excess sodium is linked to high blood pressure, a key risk factor for heart disease and stroke, as well as kidney problems, osteoporosis and certain forms of cancer.

These potential risks prompted the then Conservative government to create a task force to address the issue of sodium consumption nearly a decade ago. In 2010, the task force presented its recommendations, but less than a year later, the government dissolved the group and replaced it with another panel, which was criticized for having too many ties to the food industry.

However, Health Canada did adopt a voluntary recommendation for the food industry to help cut average sodium intake to 2,300 milligrams by 2016 through a reduction in the amount of salt added to food. The problem is that the government didn't commit to an oversight plan to ensure that food manufacturers were sticking to the plan.

The new study by University of Toronto researchers, published in Applied Physiology, Nutrition, and Metabolism, looked at sodium levels in thousands of packaged foods in 12 different categories from 2010 to 2013.

Two industry groups, the Retail Council of Canada and Food and Consumer Products of Canada, said in a statement that the findings reveal "an impressive snapshot" that shows companies are making "significant progress" toward sodium reduction.

The groups say the study showed major progress in commonly eaten foods such as cereal, English muffins, pizza, canned vegetables and plain chips – and that they remain committed to the sodium-reduction guidelines.

But the study suggests a less rosy picture. Researchers found that the vast majority – 82 per cent – of food categories had no noticeable sodium change from 2010 to 2013. Two per cent of food categories actually experienced a statistically significant increase in sodium during that time, the study found. The findings suggest that without government intervention, the food industry won't be able to stick to the goals.

So while the food-industry groups are correct when they point to significant sodium reductions in certain food items, such as English muffins, what they don't mention is that those few items were responsible for bringing down the average sodium level for their corresponding food categories. In other words, while a few food items saw a significant sodium decrease, the vast majority have stayed largely the same, according to the research.

Over all, only 16 per cent of food categories showed a statistically significant reduction in sodium.

In a statement, Norman Campbell, a hypertension expert who has been extensively involved in efforts to reduce sodium levels in Canada, says the study is evidence that the food industry "is not keeping pace with the voluntary standards that it set for itself."

Campbell, the Heart and Stroke Foundation/Canadian Institutes of Health Research chair in hypertension prevention and control, said it's time for governments to step in to better monitor the food supply and the accuracy of food labels.

During the 2015 federal election campaign, Prime Minister Justin Trudeau pledged to bring in a new plan to help reduce sodium levels in processed food sold in Canada. It's unclear when, or if, the government plans to make good on that promise. The ball is in its court. 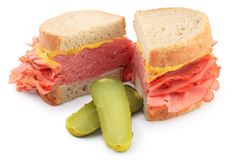