Francess Halpenny was already in her prime, holding down two key jobs as a general editor of the Dictionary of Canadian Biography and dean of the Faculty of Library and Information Science at the University of Toronto when I met her in the mid-1970s at a conference I was covering as a callow editor for Quill & Quire. Her credentials were impressive. And yet, what I remember about Halpenny is her personality.

She responded with bright-eyed intelligence, curiosity and patience when I cornered her at a reception and bored her with my jejune pensées about the slew of books that had come out about Virginia Woolf and her circle. What was I thinking? And yet the second time we met, Halpenny was friendly and apologized for forgetting my name, considering "we have had such conversations." I still wonder about the layers of meaning in her choice of "such" as an adjective.

Over the years we met occasionally, and when she couldn't be persuaded to come out for a Christmas lunch this month, I went to visit her at the Sunnybrook Veterans Wing in Toronto.

She has lived an extraordinary life on her own terms – she enlisted in the RCAF during wartime – so I was curious how she had made the decision to move into long-term care, and what advice she may have for the rest of us. (First, though, I wanted to know why her first name ends in a double S. That was easy: She was named after an aunt, who spelled Francess with a sibilant S.)

I found Halpenny in the room she shares with two other women, and pushed her wheelchair to a spacious lounge on the same floor. At 96, she is as sharp as ever, although her eyesight is failing. (Resourceful and self-reliant, she is intending to consult the librarian on site about electronic books with expandable font sizes.)

Halpenny knew that her days of living independently were coming to an end two years ago. She'd been using a cane for several years, but when she began falling she realized that it "was unsafe" for her to continue living alone in her apartment.

"I would have to crawl to the telephone and get 911," she said. "I knew that was not good and that I should make a change." About that time she heard a man from her church talking about the veterans wing at Sunnybrook and she decided to investigate. "There was a waiting list," she said, "but by the time they called me, I was ready to go."

I asked how others should know when it is time to move.

"When you are able to think of the pros and cons and make a decision between them," she said. "But don't leave it too long because if you do, you'll get here and you can't appreciate the things that are on offer. You aren't just with it enough to do that and that is too bad. So you want to give yourself a little leeway."

Before moving to Sunnybrook two years ago, she told her family what she was planning and "they were happy enough" with her decision. Since then, her brother, who is four years younger, and his wife, both of them veterans, have also moved into Sunnybrook, probably because "they knew I had been well-treated and there was a place where they could be together." Every so often her younger relatives bring in food and the extended family gathers for a festive dinner – one was planned for that evening.

"I don't have any complaints," Halpenny told me. "Naturally there are some times when I would like some more privacy, but very few." Don't be negative is her final piece of advice. "There are a lot of people trying to help you, so take advantage of that, and do be positive."

We aren't all like Halpenny – clear of mind, independent and eligible for veteran's benefits – but we are all likely to face the same dilemma about long-term care. Dr. Jocelyn Charles, medical director of the veterans wing at Sunnybrook, said the key, no matter the circumstances, is determining what you want.

Halpenny can speak for herself, but "sometimes," Charles said, "people are encouraged to go to long-term care because their children are worried about them. What we need to focus on is what is most important to the person." And that, she warns, "can change over time."

Some people value their privacy too much to consider living in an institution, while others fear the isolation and danger of living alone. It's important to ask what matters to an individual now, and what might matter in the future. If the answer is "remaining in my own home," that "is a goal of care," says Charles, and we should focus on "how we can make it happen."

If aging at home isn't possible, family and friends can check out nursing homes and long-term care facilities. Keep in mind, though, the warning in Atul Gawande's book, Being Mortal, about the tendency to dismiss independence – a quality we value for ourselves – in favour of safety when dealing with people we love. So, along with inspection reports and fixtures and fittings, pay attention to the philosophy and the atmosphere of nursing homes and long-term care facilities. How do the staff interact with the residents, for example?

Scouting is one thing, deciding is another. The choice belongs to the person making the move. "I wouldn't want someone else choosing where I live," Charles said. If the person isn't capable, rely on "previously expressed wishes" to guide decisions on their behalf, she said.

As with so many elements of the long goodbye, the conversation begins with listening, not telling. I wish I had realized that 40 years ago, because even then I had a lot to learn from Francess Halpenny.

Patients should talk frankly with their doctors about assisted dying
March 22, 2018 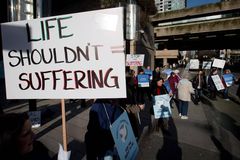 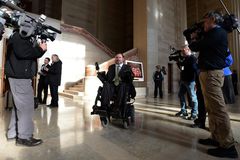 Where federal parties stand on physician-assisted death
May 15, 2018