In the critical-care unit at Toronto's Sunnybrook Health Sciences Centre, patients hover between life and death. Nurses and doctors do their best to make them comfortable and stable in hopes of aiding recovery.

And yet the physical environment where they work is constantly undermining their efforts. The open-concept design, which dates back to the Crimean War, makes it more difficult to contain the spread of hospital-acquired infections. The noise from machines, staff and overhead announcements constantly interrupts rest. Fluorescent lights and little access to windows keep patients cut off from the world, unsure if it's day or night.

More from the #TheHospital

"If we could start fresh, we would design this place entirely differently," says Dr. Brian Cuthbertson, chief of Sunnybrook's critical-care department.

This sort of outdated health-care architecture tends to be the rule, not the exception. Throughout the 20th century, hospitals were constructed to suit the needs of caregivers, not patients, says Robyne Maxwell, director of care delivery model redesign for Island Health in Victoria, B.C. The physical space wasn't considered an integral part of the healing process.

But that line of thinking is rapidly becoming part of the Dark Ages of medicine. The catchphrase today is "evidence-based design," which takes as its starting point that patients' surroundings have a major impact on outcomes and on staff's ability to do their jobs more efficiently. Among the key findings: Numerous medical studies have shown that single-patient rooms, noise-absorbing floors and ceilings, exposure to natural light and reduction in overhead announcements encourage rest – and help patients get home sooner.

At Sunnybrook, pockets of the hospital show a glimmer of what's to come. In the hospital's new neonatal intensive care unit, which opened in 2010, all 48 beds are housed in single rooms, with the exception of two rooms designed for twins. Glass walls allow the nurses constant visual contact with their tiny patients. Rooms are darkened to reflect research that shows NICU babies thrive best without the lights on. And each room has a separate entrance for parents, which allows them to visit their children as much and as often as they wish.

There are also "negative pressure" rooms that have separate ventilation systems, allowing patients with infectious illnesses to be segregated. The department is further divided into four pods that, if necessary, can be isolated from each other in the event of an outbreak. There are scrub sinks outside every patient area – the only place in the hospital that can make that claim.

Since the department has opened, there have been no outbreaks of chicken pox or other infectious agents, which was a fact of life in the old department.

There are signs that this sort of design will one day dominate the country's hospitals. The Canadian Standards Association now recommends that at least 80 per cent of the bedrooms in new hospitals be single-patient units. And new institutions, such as the Royal Jubilee Hospital in Victoria and the redevelopment of Toronto's Centre for Addiction and Mental Health, have won worldwide accolades for their incorporation of patient-friendly design.

The challenge is finding ways of incorporating evidence-based design into buildings that were constructed decades ago. Retrofitting existing institutions takes a lot of money and a commitment to spend more up front to save in the long run.

It's not an easy sell. Dr. Michael Gardam, director of infection prevention and control at the University Health Network in Toronto, says updated wings and new hospitals should be designed so that 100 per cent of patient rooms are private. But few, if any, do that, because hospitals are "addicted to that revenue stream." Having only single-patient rooms costs more to build, takes up a larger footprint, and also prevents hospitals from charging patients who want to pay to upgrade to a single room, Dr. Gardam notes. 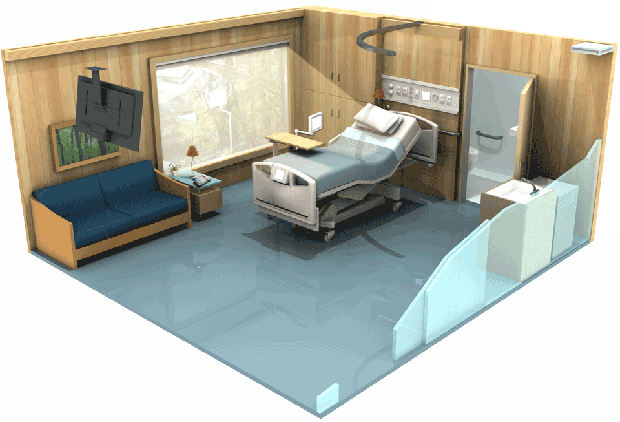 Access to a private room is the design intervention that can have the greatest impact on a patient’s recovery. Numerous studies have shown that private rooms reduce stress, make it easier for patients to sleep, speed recovery times, increase privacy and dignity, and may even reduce the incidence of medical errors.
A Canadian study published in the American Journal of Infection Control found that each hospital roommate an individual has increases his or her risk of developing a superbug by 10 per cent. The study, conducted in Kingston General Hospital, found that patients had between two and 46 roommates during a typical stay.
Privacy is important too: It encourages the presence of family members and loved ones who can call for help and prevent patient falls. When a hospital in Indianapolis redesigned a coronary critical-care unit to have larger single patient rooms, the number of patient falls was reduced by two-thirds. 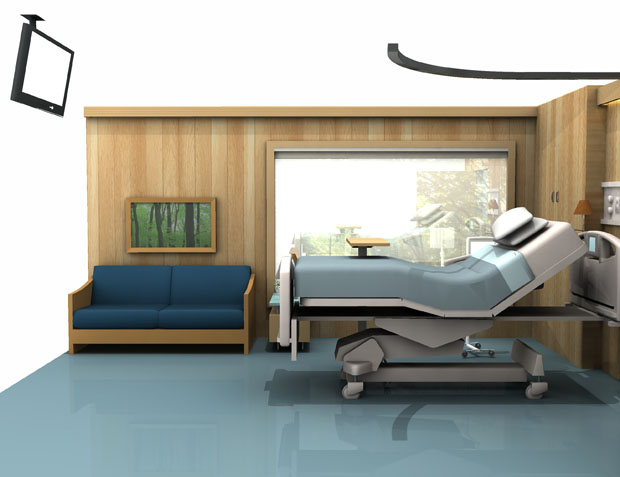 Instead of institutional green or gray walls and poor lighting, many new hospital rooms closely resemble what you’d find in a comfortable hotel. Walls that incorporate wood or soothing colours, artwork depicting scenes of nature, and enough space for visitors have been proven in several studies to increase patient satisfaction, improve mood and encourage the presence of a patient’s support network. Adding a pull-out couch allows family members to spend the night when needed.
A room with a window and a view isn’t just a perk; it’s a proven way to help patients recover faster with less pain. A study led by Roger Ulrich, a leading proponent of evidence-based design, showed that patients with a view of nature requested far fewer doses of pain medication, experienced fewer complications and recovered and went home faster than those whose view was of a brick wall.
Exposure to sunlight also makes a difference. A 2005 study in Psychosomatic Medicine demonstrated that patients with greater sunlight exposure required fewer painkillers, leading to a 21-per-cent reduction in medication costs. 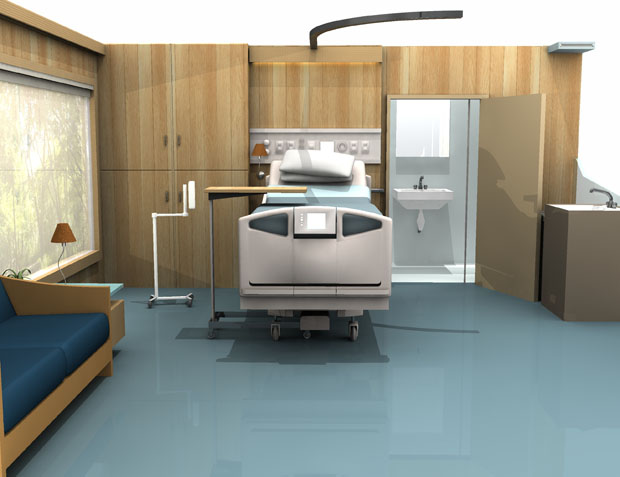 A BED AND CONTROL CENTRE, WITHOUT RAILS

Surprisingly, the use of bed rails to prevent falls may, in fact, accomplish the opposite. A 2005 study in the Irish Journal of Medical Science found that 12 per cent of bed-area falls and nearly 30 per cent of all bedside injuries were linked to bed rails. The same study found that bed rails were associated with more severe injuries than beds without such restraints.
Built-in lifts make it easier for patients to get in and out of bed, reduce the risk of falling and protect hospital staff from injury.
Portals behind the beds can accommodate equipment that must be plugged in or connected to wires, keeping the bedside area less cluttered. Controls can be installed to allow patients or family members to adjust lighting, turn on music or operate a video screen that can display television shows as well as information about a patient’s condition, treatment and medications. 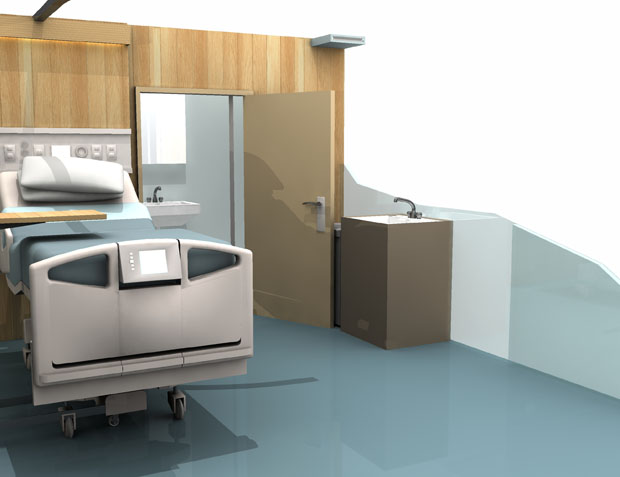 Private bathrooms that are easily accessible from a patient’s bed are critical to the reduction of the spread of hospital-acquired infections.
Noise is one of the biggest complaints of hospital patients. Several studies have documented the positive effects of installing sound-absorbing ceiling tiles. The enhanced tiles reduced noise by five to six decibels in several studies, and patients reported being disturbed less frequently.
Glass walls or doors allow health-care workers to keep an eye on patients without having to disturb them. This also can help reduce the spread of infection. Curtains or blinds can be used when privacy is required. 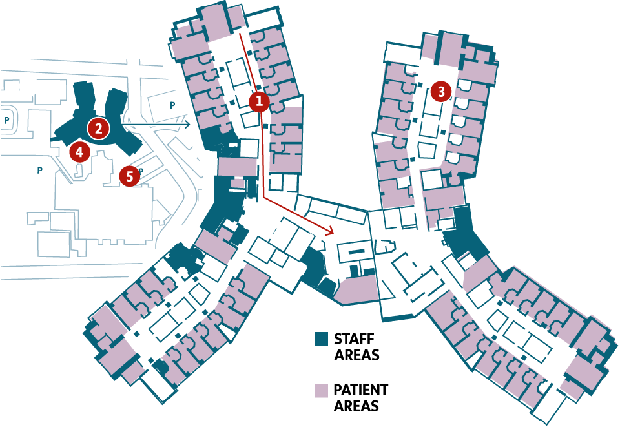 BLUEPRINT TO A BETTER HOSPITAL

1. WAYFINDING Many hospitals are all too easy to get lost in. This creates unnecessary stress for patients, families, visitors and even health-care workers. It’s also a drain on resources. A study at an Atlanta hospital found nearly 4,500 person hours (the equivalent of two full-time positions) were eaten up by staff giving people directions. Solutions to this problem include clear, direct signage throughout the institution; simple layouts that require few turns or floor changes; and reliance on large hallways to serve as main arteries for the entire building.
2. RADIAL DESIGN Advocates of evidence-based design say circular layouts decrease the amount of  walking time by nurses and other health professionals,  and may be particularly helpful for patients with dementia  who tend to wander.
3. DECENTRALIZED NURSING Instead of one large nursing station, spreading working stations throughout a unit enhances nurses’ ability to monitor patients, decreases  the amount of time they spend walking, and also reduces noise levels.
4. HOSPITAL GARDENS Numerous studies have concluded that gardens can substantially lower stress levels, which can lead to faster recovery times and improved patient outcomes.
5. EASY ACCESS TO PARKING Providing parking that is well-located in relation to the hospital and easily accessible from main entry points is  linked to improved hospital  satisfaction and reduced stress.