Globe photographer Kevin Van Paassen has spent countless hours at Sunnybrook Health Sciences Centre since September capturing the drama and the routine of the institution. This gallery features images from the Sunnybrook Veterans Centre, a facility that may prove to be the prototype of future care centres, and a patient and her doctor as she undergoes knee surgery. Read the related story How one hospital is dealing with Canada's aging population by Sandra Martin and explore the rest of The Hospital series. 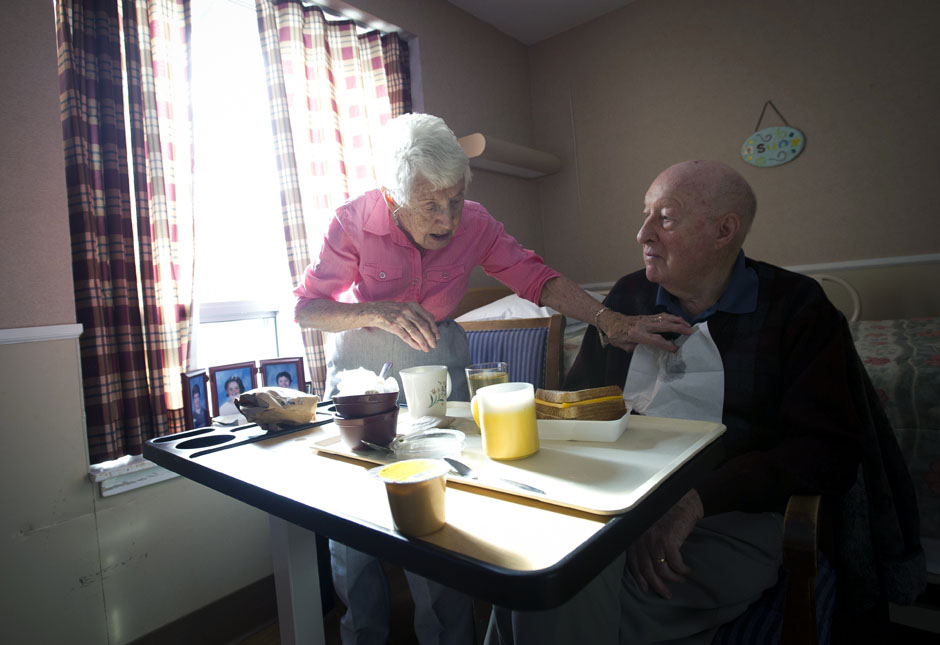 The Dorothy Macham Home: A prototype for the future

This is Ted Ramsdale who's 91 and lives at the Dorothy Macham Home, a state-of-the-art facility for veterans with challenging behaviours related to dementia. Ted's wife, Dorothy, 90, visits frequently. We photographed this visit and the other images from the home on January 14, 2014. 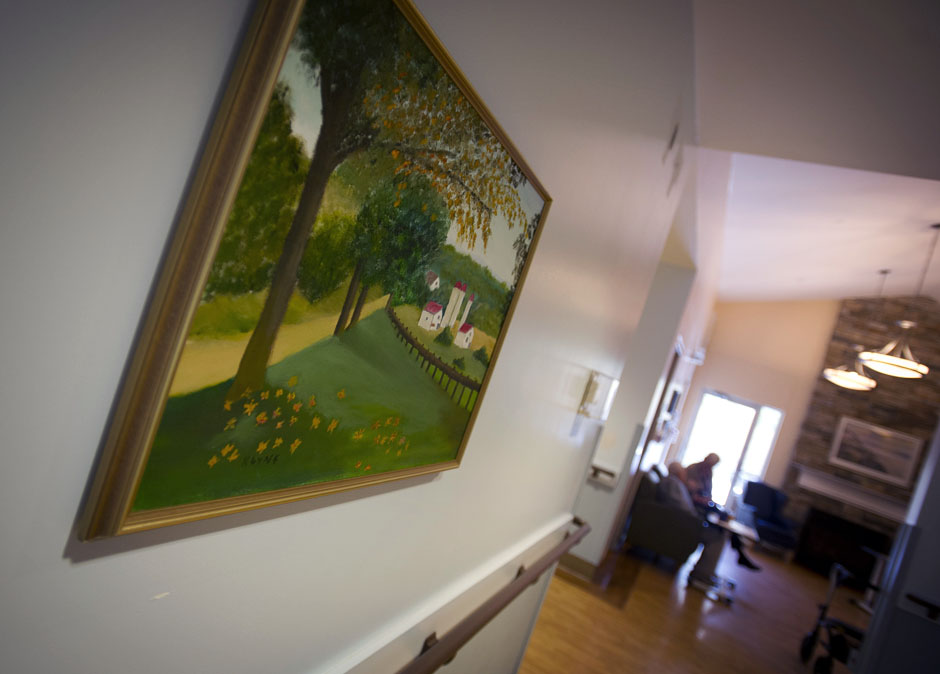 The Dorothy Macham Home is a special 10-bed unit that is a national model for treating people with dementia and severe behavioural issues. The home also represents a stark example of one of the most critical challenges facing Canada’s hospitals: The boomers are getting old and they'll need more places like this. 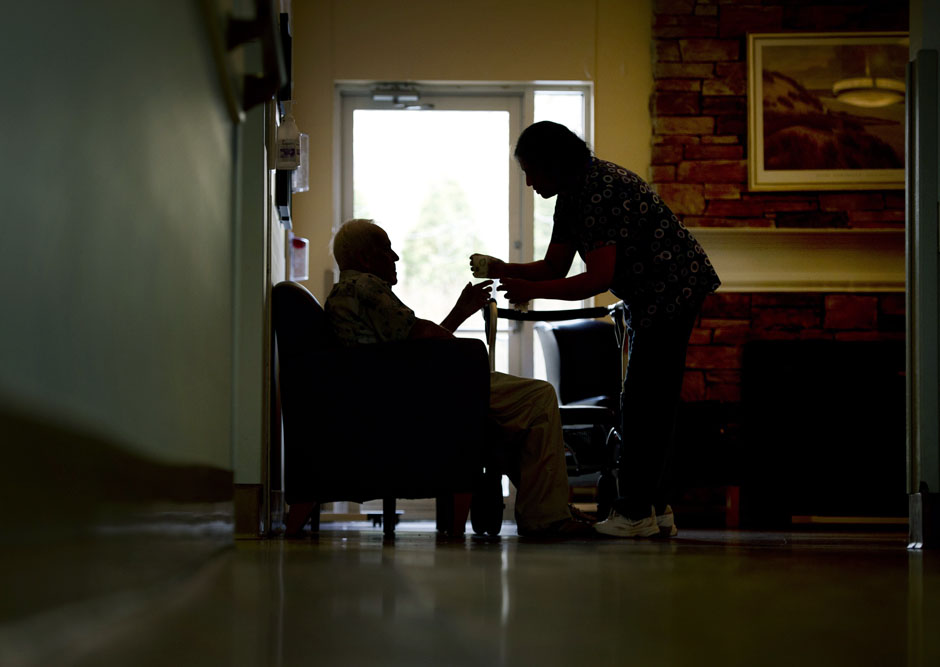 Here's a fact: Today, slightly more than 15 per cent of Canadians are over the age of 65. Within a decade and a half – by the year 2030 – nearly a quarter of the population (7,845,000 Canadians) will be 65 or older. In this image, a patient we can't identify receives medication from a nurse. 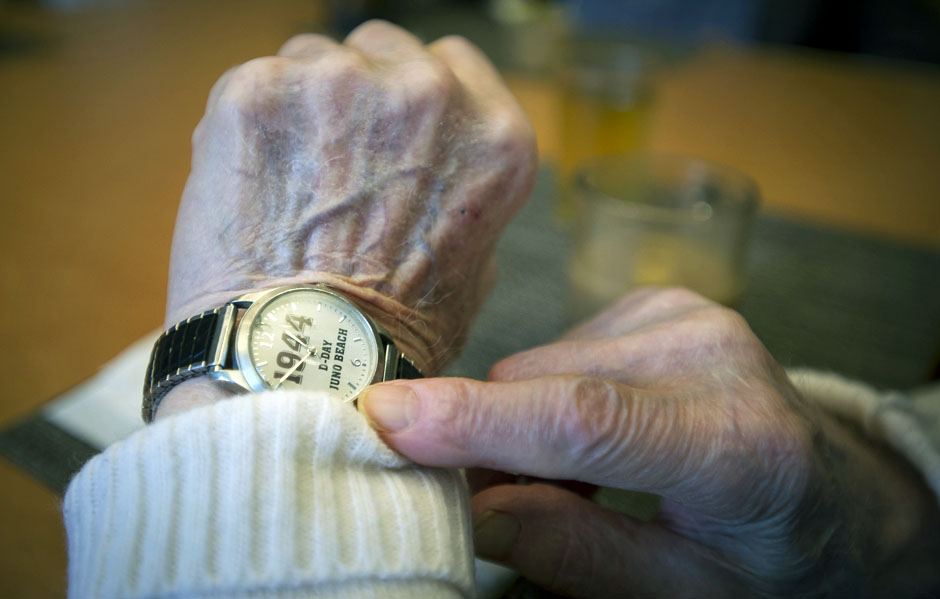 All of the patients at the Dorothy Macham Home are veterans, one of whom (we can't identify him) shows off his D-Day watch, which he was given in recognition of his military service. Sunnybrook was founded after World War II as a soldier’s hospital. 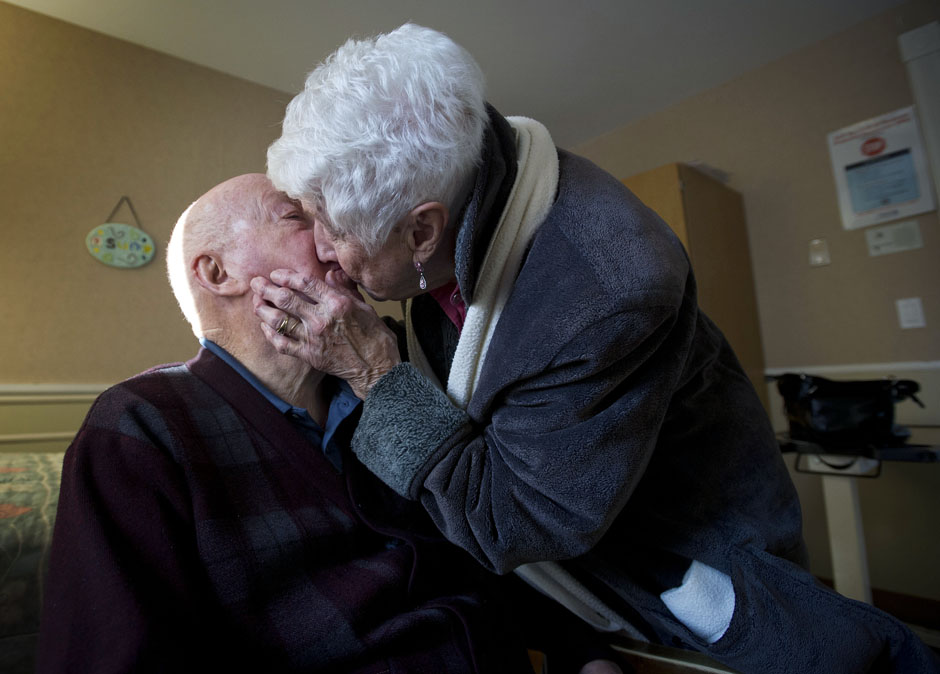 Dorothy Ramsdale kisses Ted good-bye after her visit. Here's another fact: By 2030, nearly one and a half million Canadians will be suffering from dementia, many of whom won't be suitable to live in your average nursing home. So where are they going to go? 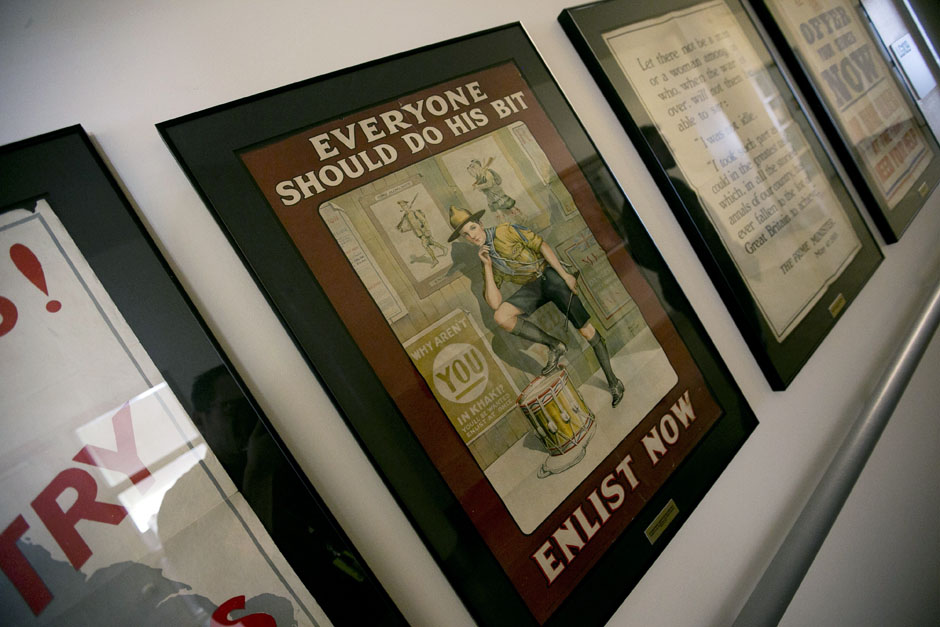 A snapshot of life inside The Sunnybrook Veterans Centre

There are more than 500 veterans of World War II and the Korean War living in Sunnybrook’s main veterans home, long-term hospital beds and the Dorothy Macham Home. The veterans centre is a separate building decorated with vintage recruiting posters such as these. We visited the veterans centre several times; this image was taken October 29, 2013. 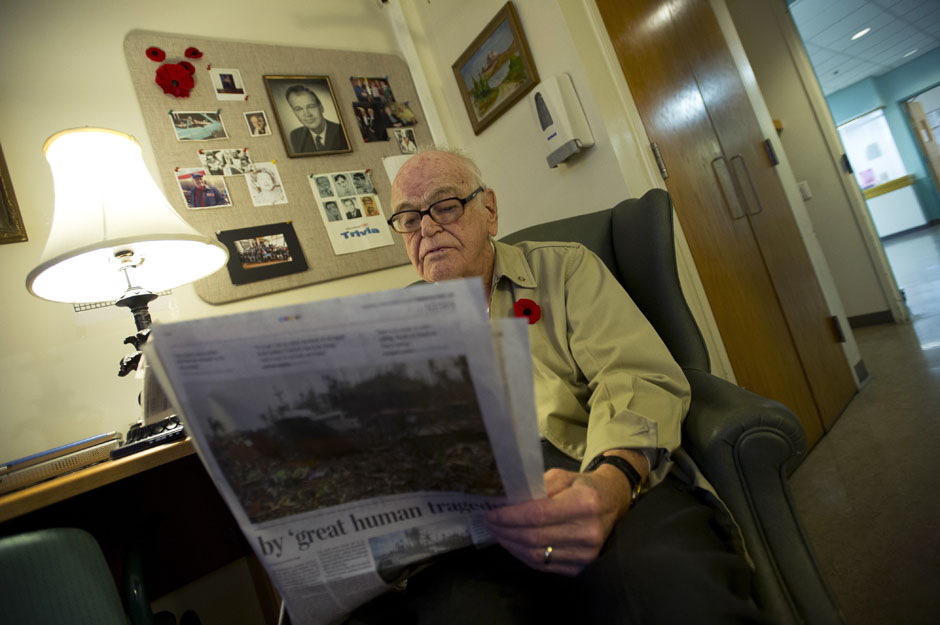 One of the veterans centre residents we met was Murray Westgate, 95, a gem of a fellow who's lived here for nearly a decade. You might recognize him, too – Murray used to be the genial, trustworthy face of Imperial Oil and would appear during Hockey Night in Canada broadcasts through the '50s and much of the 60s. 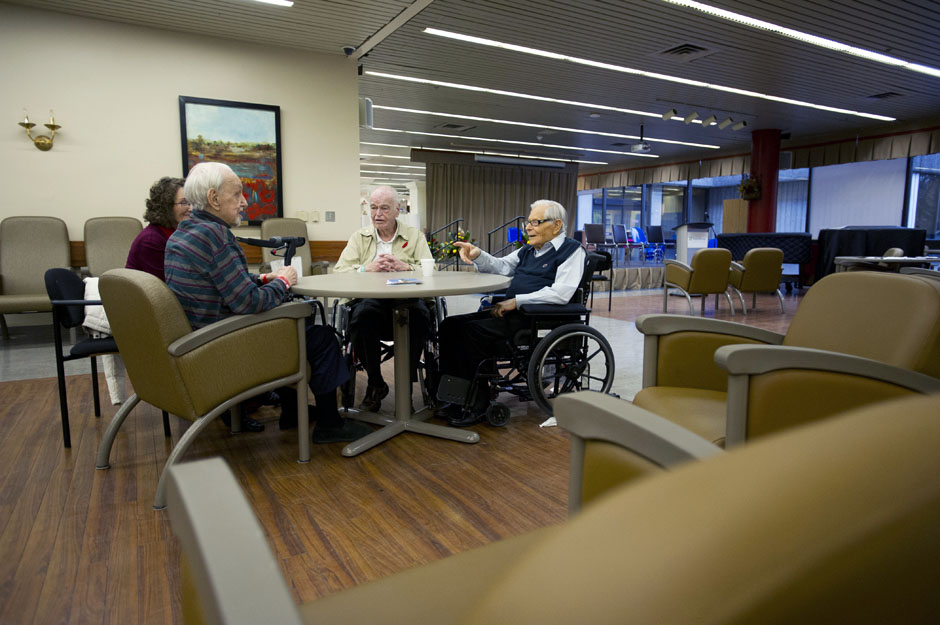 Sandra Martin wrote about Murray and the veterans centre in December. You can read more about him and watch a few of his 50s-era TV commercials. 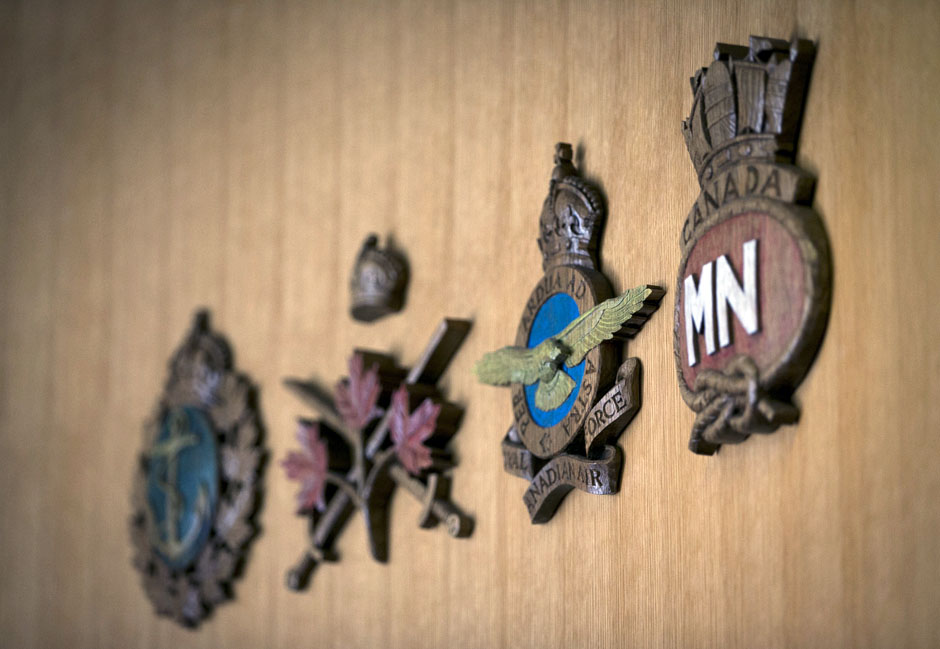 This is the Honour Wall at the veterans centre, photographed on Tuesday, October 29, 2013. Veterans who live there pay less than $1,000 a month for food and accommodation and rest is covered by an annual grant of $25 million from Veterans Affairs Canada. 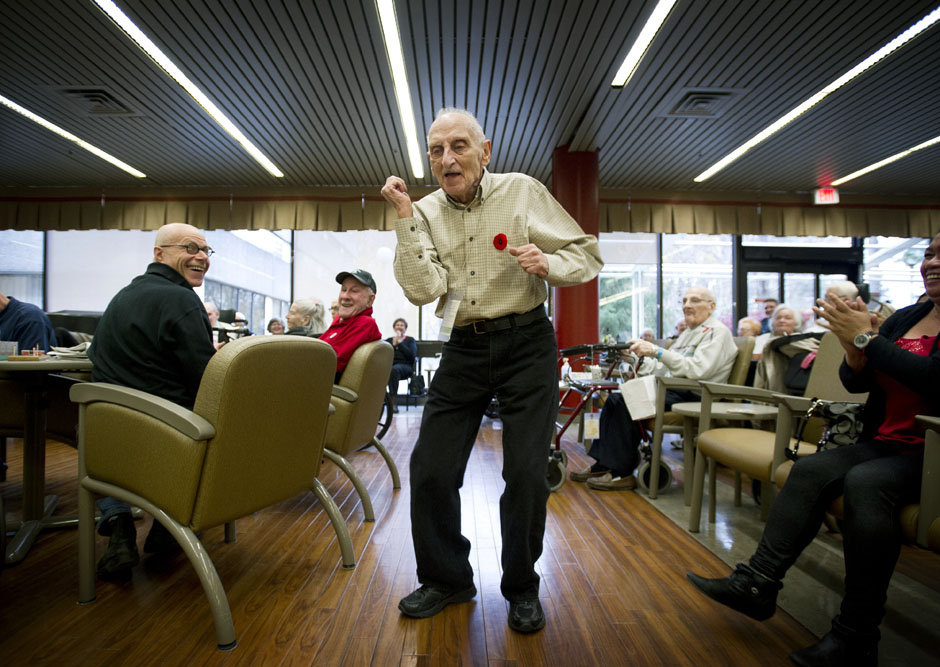 Louis Gelman, 89, dances along with a musical performance by a live band during Remembrance Day ceremonies last year. Gelman has lived at the Sunnybrook Veterans Centre since July, 2013. 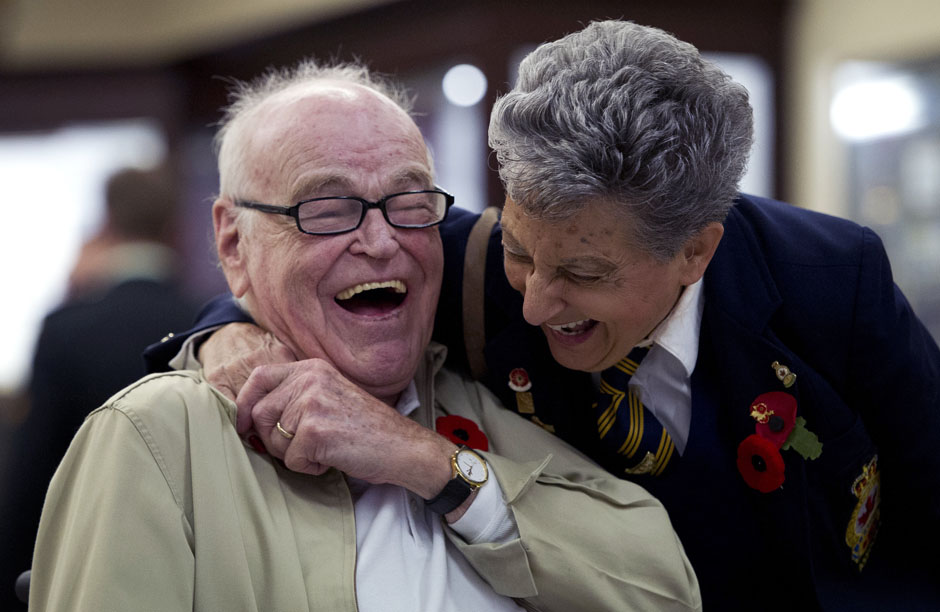 Here's Murray Westgate again. He served in the Navy during World War 2 and made numerous trips across the Atlantic. Murray reflects on his war experience and other things in this audio slideshow we ran in December. 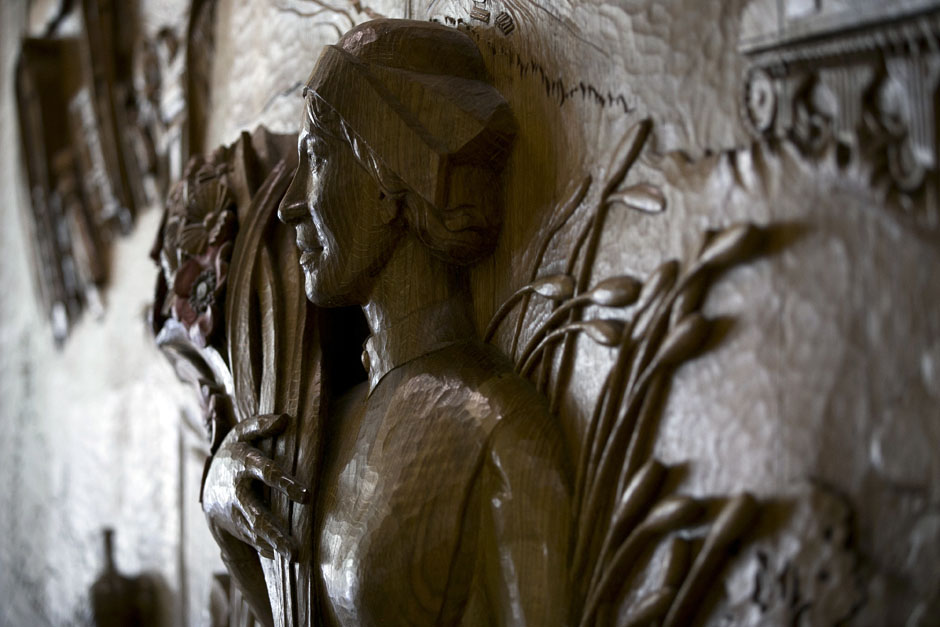 One dilemma Sunnybrook faces is that these veterans – their average age is 91 – will be gone within the next few years, and the money from Veterans Affairs will stop flowing. The future of this spacious main facility with its Inuit art collection, comfortable reception areas, concerts, barbershop and dentist’s chair is not yet decided. 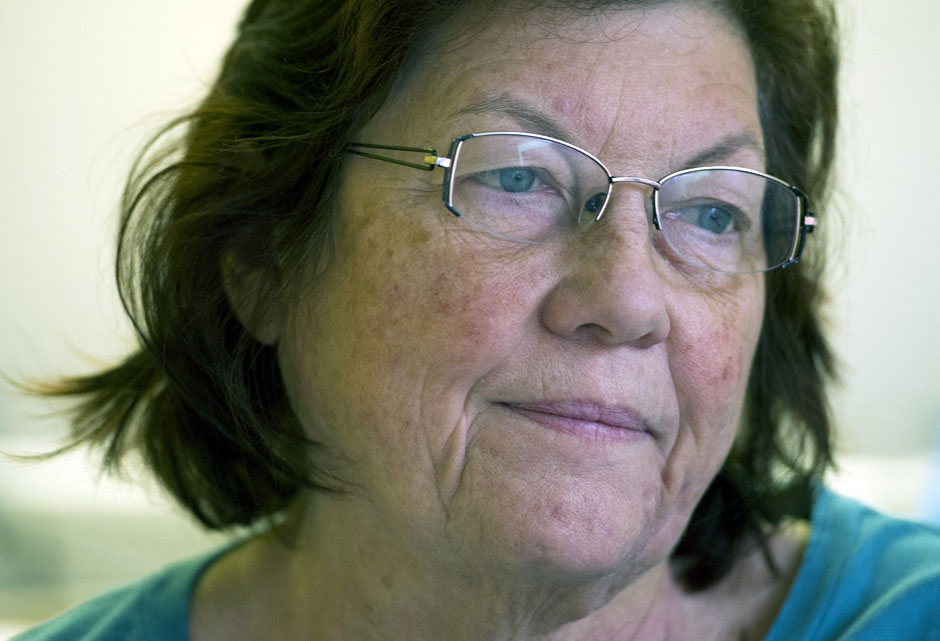 Preparing for surgery: One patient's experience

We were invited to interview and photograph Sharron Baker, 67, as she underwent knee surgery in early November. As part of the metrics of health-care delivery across the country, one of the 10 things the federal government looks at is wait time for joint replacements as one of the indications of the health of the health-care system. 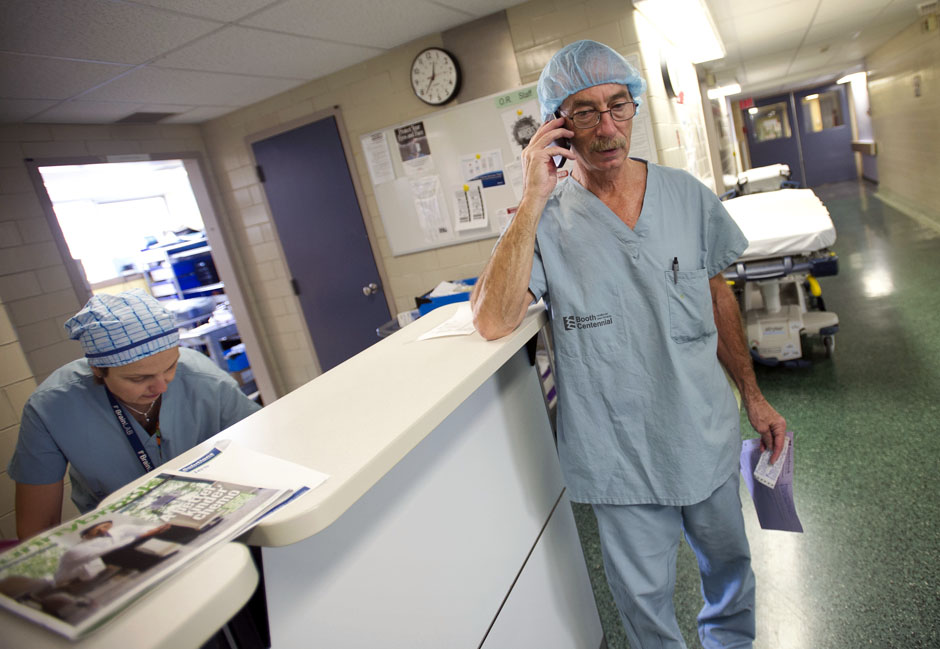 Sharron Baker's doctor is Jeffrey Gollish, Medical Director of the Holland Orthopaedic & Arthritic Centre and the head of the lower extremity arthroplasty program for Sunnybrook. 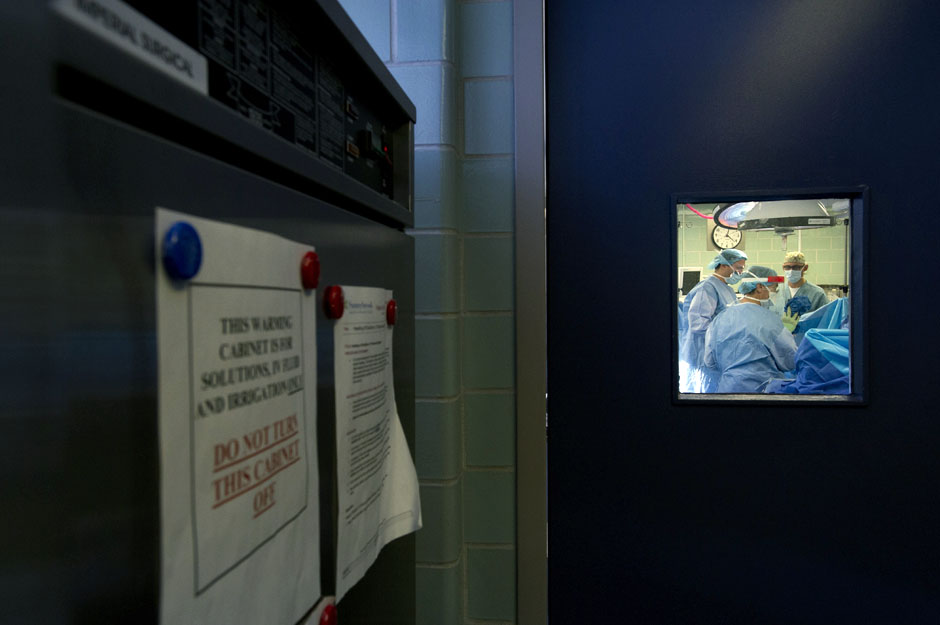 There's been a great deal of money thrown at joint replacement, and consequently wait times to see a hip and knee specialist have decreased in the past decade and operating room efficiencies have increased. 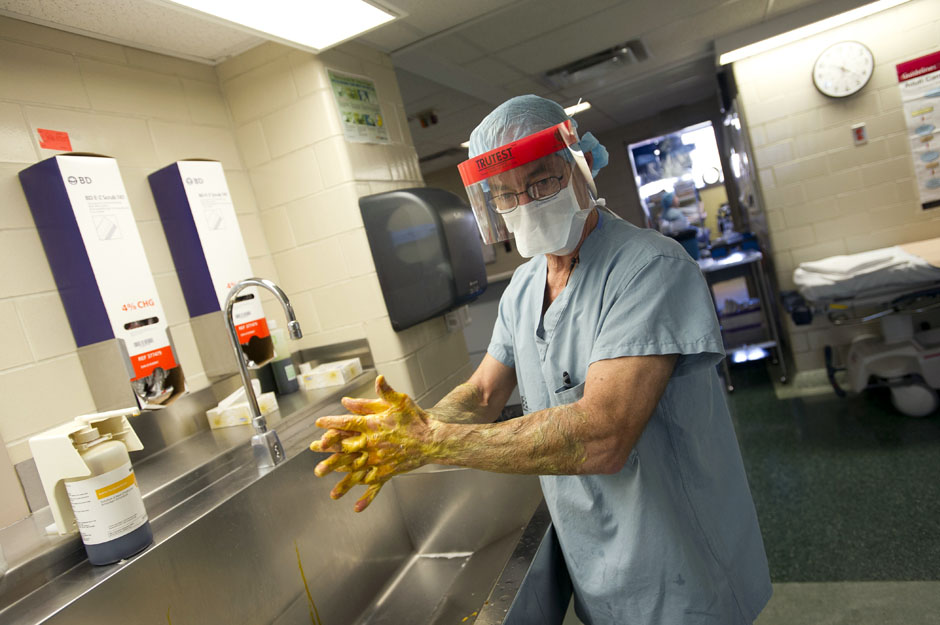 You can read a Q&A with Dr. Gollish we ran in November. He says the most gratifying thing about his job is returning people back to an active life. 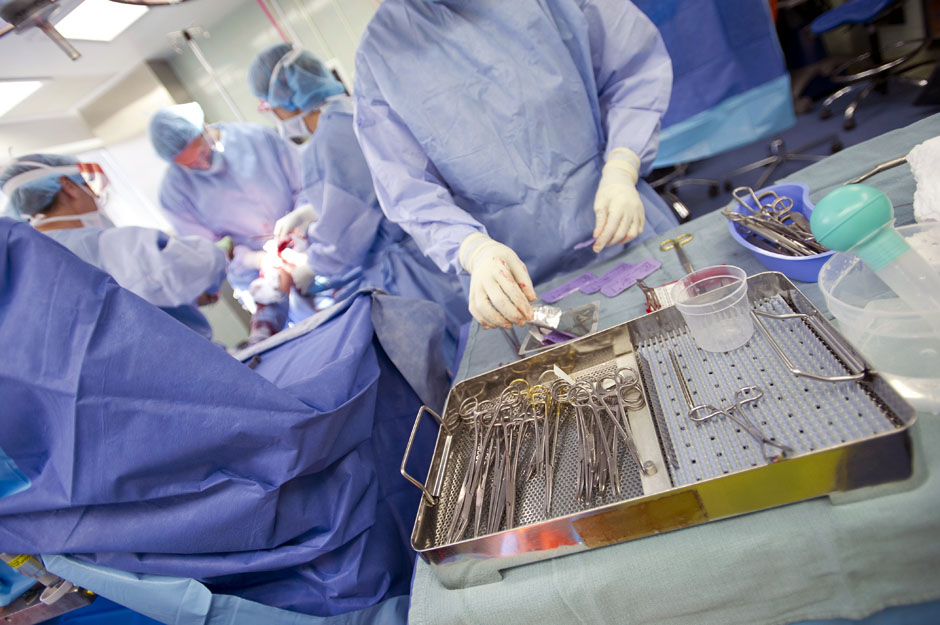 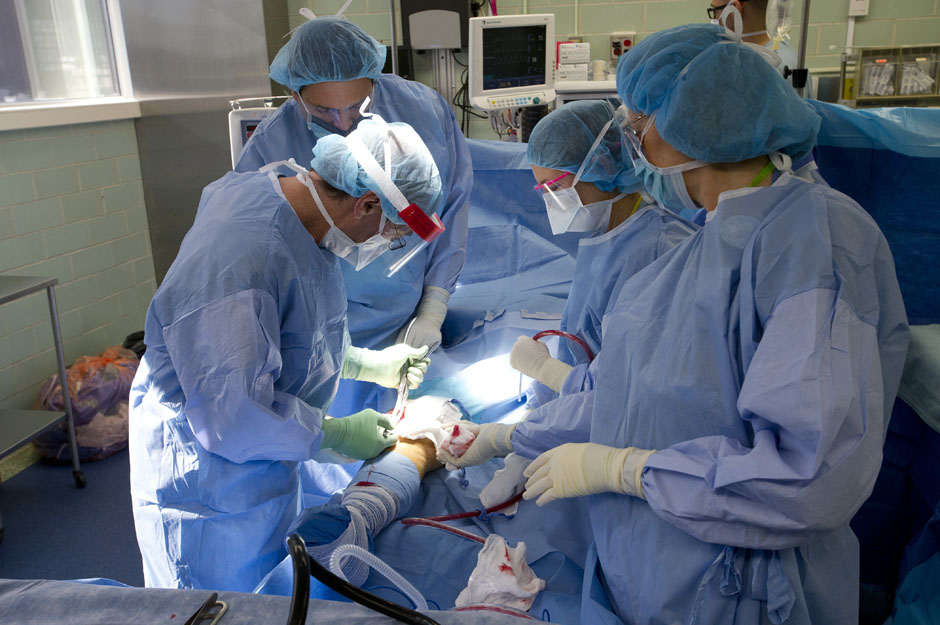 Dr. Gollish has been an orthopedic surgeon for 28 years and is recognized for his work on the development of minimally invasive surgical techniques in hip and knee arthroplasty. 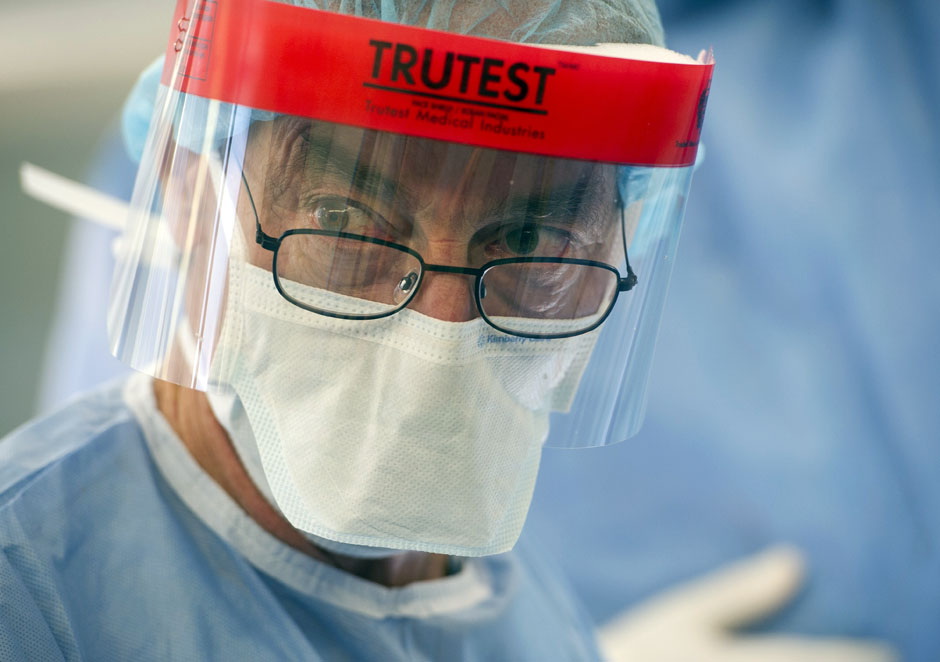 "As a surgeon, I think one of my biggest challenges is trying to sort out how to make more people happier with the outcome of their surgery," Dr. Gollish says. 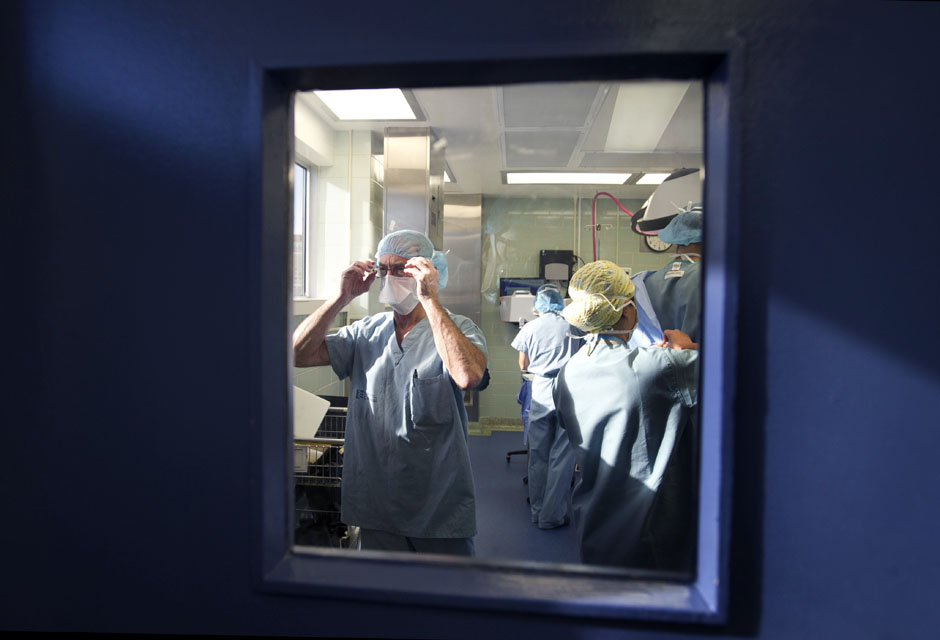 "There have been a lot of developments in terms of new joint replacement and so on. [However], we haven’t really seen a significant increase in satisfaction rate after joint replacement. There’s been a lot of work done on it. They’re trying to sort out the reason for dissatisfaction, whether there’s actually a mechanical problem with the joint that may be fixable or not, or whether patient expectation is out of keeping with what we can deliver," Dr. Gollish said. 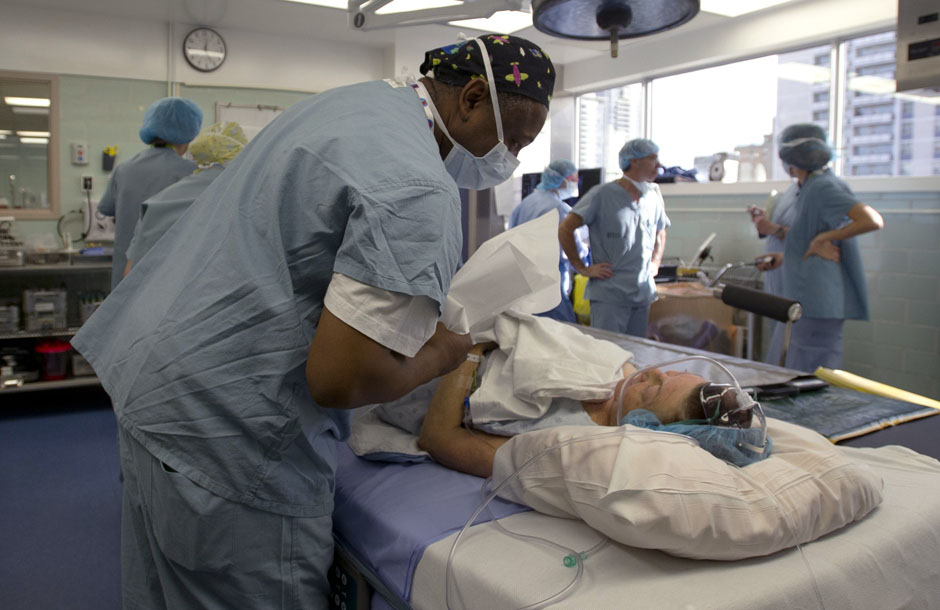 Here's Sharron Baker right after surgery. She is taken from the operating room into a recovery room. 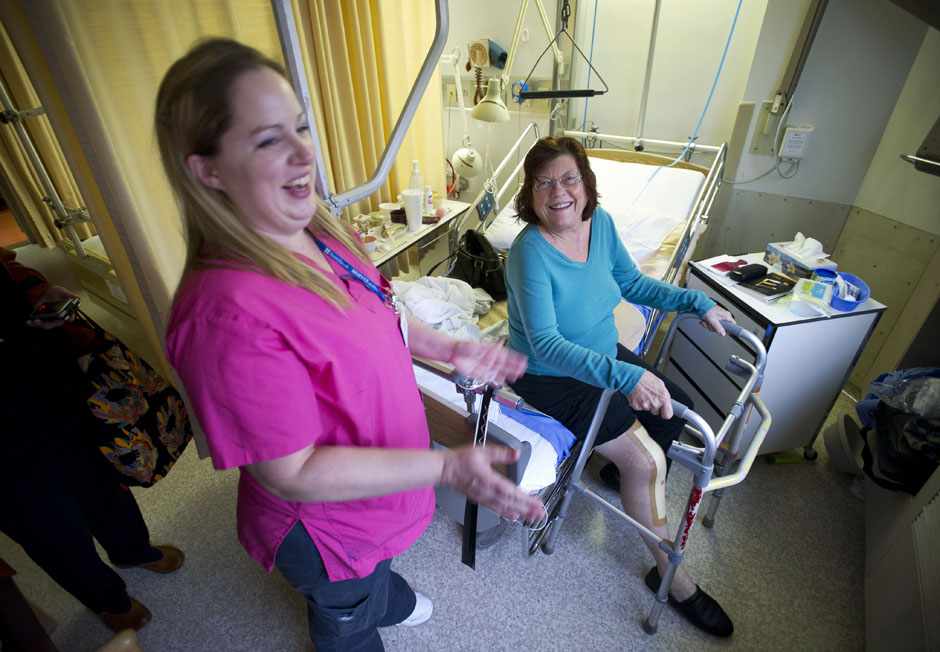 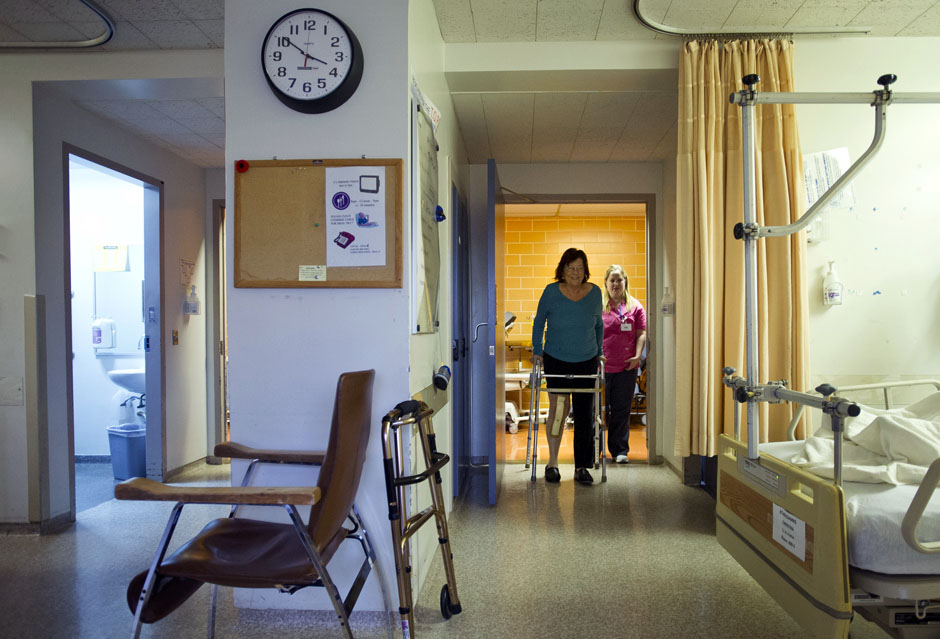 Ms. Baker's ultimate experience was not entirely positive, though. As Sandra Martin reports, Ms. Baker found the aftermath gruelling. She couldn’t drive, she was in pain, her family doctor wasn’t in the loop about her post-operative care and, because she lives outside Toronto, it wasn’t convenient for her to do follow-up at the Holland Centre.