Leontina Da Costa and Millicent Linton pick up the lightweight hospital mattress in a room on the orthopedic and neurosurgical unit at Sunnybrook Health Sciences Centre and scrub it with vigour normally reserved for the removal of red wine from white upholstery. The swishing sound of their microfibre cloths repeatedly assaulting the green waterproof cover provides a hypnotic soundtrack to their work.

After the mattress is clean, the two housekeepers still have to scrub the bathroom, disinfect all of the surfaces in the room and mop the floor before the next patient is allowed in. If one bed rail isn't properly wiped down, if every millimetre of a toilet seat isn't disinfected, if a TV remote control isn't cleaned with industrial-strength chemicals, the result can be a catastrophic outbreak of antibiotic-resistant bacteria that can cripple an entire department and kill the vulnerable patients in its path.

This is the new reality of hospitals in the 21st century. The admission last week by B.C.'s Fraser Health Authority that it has confirmed 41 cases of Carbapenem-resistant Enterobacteriaceae (CRE) – a superbug that is resistant to nearly all drugs and was thought not to have gained a foothold in Canada – is a startling reminder of the dangers antibiotic-resistant bacteria pose.

Every year, more than 220,000 Canadians develop infections during a hospital stay. On average, these infections kill 22 patients every day – about the same as the number of Canadians who will die from breast cancer and leukemia combined. The cost of caring for these patients ranges from $2,000 to $20,000 each. It's a massive burden on health care in Canada, and it's getting worse. 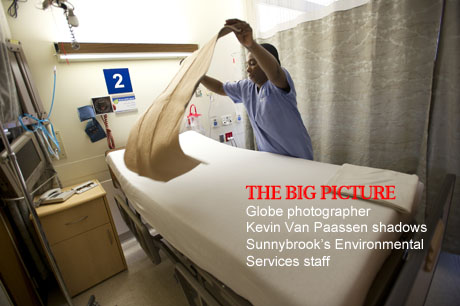 If drastic measures aren't taken quickly, experts say the world could enter a post-antibiotic era, where children die from scraped knees and something as simple as surgery to implant a pacemaker is too risky to undertake. What is most frightening, say infection-control experts who are watching the spread of hospital-acquired superbugs across the country, is that Canada is not doing nearly enough to control this deadly problem.

New threats on the horizon

Right now, one out of every 12 patients in a Canadian hospital is colonized or infected by Clostridium difficile, Methicillin-resistant Staphylococcus aureus (MRSA) or Vancomycin-resistant Enterococcus, the superbugs that currently pose the biggest challenges to health institutions.

CRE, the latest threat, are a family of bacteria that are resistant to all of the standard classes of antibiotics normally used to treat serious infections. Once introduced into a health-care facility, CRE can transfer their resistance to other bacteria, making once-manageable superbugs impossible to treat. So far, the number of cases in Canada has been relatively small, but the unfolding situation in Fraser Valley has many infection control experts gravely concerned.

Superbugs are created when a bacterium develops resistance to the antibiotic designed to kill it. When antibiotics are used inappropriately, they kill susceptible bacteria and create the perfect environment for resistant strains to grow, multiply, mutate and spread. Hospitals, where antibiotic use is high and invasive medical procedures are performed on patients with weakened defences, provide an ideal breeding ground for these virulent, insidious bacteria to thrive. Alcohol-based hand sanitizers and handwashing can help prevent the spread between hospital workers, visitors and patients. But they can't stop a patient from being infected by an improperly cleaned table tray or blood-pressure cuff.

Superbugs can live on surfaces for weeks – even months. To illustrate how difficult these bacteria are to contain, one study by U.S. researchers published in Infection Control and Hospital Epidemiology found that when hospital staff enter the room of a patient with MRSA, nearly half of them will leave with the superbug bacteria on their gloves or gowns – even if they don't touch the patient.

Last month, health authorities in the U.S. disclosed that the source of a CRE outbreak in Illinois last year that eventually spread to dozens of people was a single endoscopy scope (a device that is inserted down patients' throats). The hospital had followed accepted cleaning practices, but the germ still spread.

Brian Young, a former member of the legislative assembly and cabinet minister in Nova Scotia's government, doesn't know how his mother, Julia, contracted C. difficile three times during a hospital stay in Cape Breton to recover from a stroke. But since she was bedridden for the duration of her eight-month stay, he suspects the infection was brought to her by a health-care worker whose hands were contaminated with the bacteria.

His mother, a vibrant 88-year-old who painted and went for long walks in her spare time, eventually succumbed to her third bout with the superbug in January 2012. Mr. Young still has trouble comprehending what unfolded.

"You don't go to the hospital to be made sick or sicker," he said during a recent interview. "You go to be made better and they failed miserably with mom."

'It's just not nearly enough'

Despite growing worldwide concern over the prevalence of hospital-acquired infections and the threat of antibiotic resistance, many infection-control experts say Canada isn't treating this global threat with the urgency it deserves.

Other countries have taken deliberate steps to alert the public about the dangerous reality of superbugs and the looming prospect of a post-antibiotic era. The U.S. Centers for Disease Control and Prevention warned in a landmark report last September that, without urgent measures, antibiotic resistance will have "potentially catastrophic consequences." England's chief medical officer has said antibiotic resistance is as big a threat to the nation as terrorism. Dr. Margaret Chan, director-general of the World Health Organization, has warned that medicine could take a step back into the 19th century.

But Canada's federal government has been silent, declining to post current information about superbugs online or warn the Canadian public about the true extent of the problem, according to critics. The Association of Medical Microbiology and Infectious Disease Canada, a group of respected infectious disease specialists, last fall openly accused Ottawa of hiding the data it collects about instances of hospital-acquired infections. The association got a hold of the data and released it in order to inform the public (see sidebar).

Even then, the information is fragmented and incomplete. Dr. Andrew Simor, chief of microbiology and infectious diseases at Sunnybrook and one of Canada's leading experts in this area, said national surveillance of hospital superbugs in Canada is "rudimentary to say the best" and badly under-resourced. The Canadian Nosocomial Infection Surveillance Program, which tracks microbes in just 54 Canadian hospitals (out of more than 600), is currently the best surveillance program available. It only provides a fraction of the vital information scientists and health-care providers need about sources of outbreaks, which bugs are most prevalent and where the biggest problems are, Dr. Simor said.

Dr. Gregory Taylor, Canada's deputy chief public health officer, said in an interview the federal government is in contact with provincial and territorial counterparts on this issue, conducts regular surveillence and is looking for a number of solutions. "Certainly there's been lots going on behind the scenes," Dr. Taylor said.

But because health is a provincial responsibility in Canada, it has led to an uncoordinated response to the superbug problem. For instance, while some provinces, such as Ontario, have adopted mandatory public reporting of hospital-acquired infections, others don't proactively disclose to the public when an outbreak has occurred or how many superbug cases there are. And hospitals are left on their own to develop antimicrobial stewardship programs, which focus on reducing inappropriate or unnecessary antibiotic use across institutions.

"This is a huge problem and I don't think it'll be solved simply," Dr. Taylor said. "We recognize there's much more that needs to be done."

The case for doing more is compelling. If the world were to enter a post-antibiotic era, vast numbers of people could die from infections after routine surgery. Bone marrow transplants and chemotherapy would no longer be a feasible option because patients, whose immune systems are compromised, would be unable to fight infections on their own. Even strep throat could become a fatal disease.

The power of cleaning

The microbiology lab at Sunnybrook Health Sciences Centre is the hospital's nerve centre for superbug detection and diagnosis. All day long, technologists examine samples collected from patients to diagnose infections and identify antibiotic resistance. Some of the tests can take minutes. Others, days. The work done here is critical to determining a patient's treatment options and reducing the spread of hospital-acquired infections. If a bacterial swab grows on a culture plate despite the presence of an antibiotic, the doctor knows that patient must be isolated and any antibiotic treatment should be stopped.

Efforts like this, used in hospitals across Canada, are part of the search for new weapons in the war against superbugs.

Scientists are developing new antibiotics that bacteria don't yet know how to outsmart. Hospitals are redesigning wards to have more single-patient rooms, a proven way of reducing the spread of infections between patients. And a growing number of companies are jumping into the fray, offering new – and often expensive – technologies that promise to wipe out superbug bacteria using ultraviolet light or hydrogen-peroxide vapour.

In a sense, everyone is looking for a quick fix to a highly complex problem, says Dr. Michael Gardam, director of infection prevention and control at Toronto's University Health Network and one of Canada's most respected infectious-disease specialists. The irony is that one highly effective tool in the battle against superbugs – hospital housekeepers – is right under our noses.

Cleaners are, in many ways, the front-line gatekeepers against superbugs. But these days, health-care budgets are tight and demands on hospitals are greater than ever. That makes housekeeping, a department that isn't directly involved in providing patient care, an all-too easy target for cuts, Dr. Gardam says.

"Environmental services is not being recognized as the incredibly important patient safety initiative it is," he says.

It's a country-wide problem. British Columbia privatized hospital cleaning more than a decade ago, and more hospitals across Canada have been increasingly outsourcing housekeeping work in recent years. A 2008 report published by the Hospital Employees' Union in B.C. found that privatization led to high staff turnover and a dramatic reduction in the amount of time cleaners spent at health-care facilities.

Conversely, a study published in the Journal of Hospital Infection found that a stubborn MRSA outbreak at a hospital in Britain was only contained after the number of hours cleaners spent on the ward was doubled from 60 to 120 each week.

With constant pressure for cleaners to perform their duties faster and turn beds over in less time, many experts are questioning whether the importance of housekeepers is being overlooked to the detriment of patients.

"Whether we like it or not, we have a hierarchy in health care," said Hugh MacLeod, chief executive officer of the Canadian Patient Safety Institute. "[Cleaners] are an important part of a continuum of care. I don't know if all institutions, to be quite honest with you, view it at that level of importance."

Back on the fifth floor at Sunnybrook, Ms. Da Costa's pager buzzes steadily, alerting her when a patient has been discharged. Each time that happens, she knows she has to move quickly to get the empty bed ready for the next patient. She will clean and scrub and disinfect as much as she can, hoping the room has been decontaminated before she moves on to her next assignment.

She knows someone's life depends on it.