Adel Doss has seen the inside of a hospital too many times to count.

The 54-year-old Toronto resident, who has Type 1 diabetes and multiple sclerosis, fell in his home last fall, leaving him with two broken arms and so frail he had to be hospitalized.

Mr. Doss spent a month recuperating at Toronto's Sunnybrook Health Sciences Centre. Because he also had a bacterial infection, he was given a private room. It costs more than $1,000 a day, on average, for a bed in an acute-care hospital in Canada.

But that was just his most recent hospital stay. In the past few years, Mr. Doss has broken a hip, suffered a stroke and battled countless infections. Although support workers help him at home a few hours each week, it's not enough. He keeps deteriorating.

"We've been here too many times," says his sister, Minerva Doss, who lives with her brother and takes time from work to be at his hospital bedside. "He comes in here all the time." 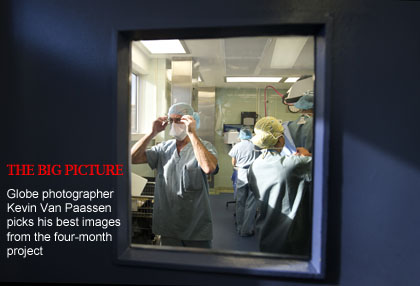 That's the problem. In Canada, the health-care system is designed for urgent medical situations, like heart attacks and accident trauma.

But patients like Mr. Doss who have chronic problems get caught up in a vicious cycle of deteriorating at home until they require hospitalization, then get discharged only to repeat the process every few weeks or months. It's expensive, inefficient and, in many ways, detrimental to our health.

Now, a growing contingent of innovative physicians and health experts believe they have the answer: Get rid of hospitals.

"The trouble is health care has changed and our patients have changed and we haven't," says Dr. Jeffrey Turnbull, chief of staff at the Ottawa Hospital and former president of the Canadian Medical Association who is winning accolades for his attempts to reform the system.

"Do I think it's dramatic to say 'Do I think this will be the end of the hospital?' No."

Instead of having imposing, difficult-to-navigate monoliths that handle people after they have already fallen into a medical crisis, a new breed of MD like Dr. Turnbull is calling for a network of community health-care centres would host regular medical clinics as well as provide access to physiotherapists, social workers, dietitians, housing-support staff and other health professionals. Health teams would make house calls where necessary.

There would still be a need for acute-care buildings that treat children who fall off of a jungle gym or middle-aged men who have a heart attack while shovelling snow, and to perform surgeries. But in an ideal future, those buildings would be smaller, more focused operations within the context of a larger system that integrates community-based care.

Dr. Rick Glazier, a family physician and scientist at the Institute for Clinical Evaluative Sciences in Toronto, also argue that simply funnelling more money into home and community care without dismantling the current hospital system is misguided: It just adds costs to the current inefficiencies. Home care typically operates in isolation from hospitals, meaning doctors can't track patients' progress, and the ability to adjust medications, order tests and communicate between health-care providers is lost. What is needed, says Dr. Glazier, is a truly integrated system.

"Just spending more on home care as it's currently constituted might not accomplish all that much, but linking it with primary care, all the services... could be a really big step forward."

Thinking outside the box

When Ottawa police officers spot a severely intoxicated homeless person, they often call on paramedics to take the individual to the hospital. Once there, however, the person has to wait for hours to be seen because there are so many others in front of him or her. The paramedics and ambulance aren't allowed to leave until the patient is officially in the hospital's care.

Usually, the individual sobers up in a few hours and simply walks away.

He decided in January 2013 to do something about it by creating a medical clinic inside the Shepherds of Good Hope shelter in downtown Ottawa. Now, the police and paramedics are instructed to bring intoxicated homeless people to the shelter where health professionals can look after them during a crisis and then establish a relationship in the hopes of helping them manage their addictions, mental illnesses or other health challenges.

In the first six months, the program rerouted 750 ambulance trips away from local emergency rooms. But the program is much more than just detox. In total, Dr. Turnbull and his colleagues have created 220 beds in Ottawa homeless shelters, where the community has access to nurses, personal-support workers, addictions counsellors, social workers and professionals that can connect them with housing. The health team can administer IVs, oxygen and medication within the walls of the shelters. The team has even created palliative hospice beds in the shelters.

"We wrap those services around them," he says. "We save very substantial amounts of money by providing better care in a community setting."

Dr. Nathalie Fleming came to the realization a long time ago that hospital walls hold back improvements that could solve many of the problems facing the health-care system.

As an obstetrician who focuses on at-risk teenagers, Dr. Fleming struggled to find a way to convince more girls to visit the hospital to get ultrasounds, nutrition counselling and other important care. Many pregnant teenagers don't see a doctor until the late stages of pregnancy; they typically have high rates of premature labour, babies with low birth weight and other problems that can lead to costly hospital stays and and long-term health and development issues.

Instead of expecting the young women to come to her, Dr. Fleming's solution was to go to them. She and a nurse set up shop in St. Mary's Home, a popular community centre in Ottawa, and start offering medical services to at-risk pregnant teens.

A decade later, the program has expanded to include prenatal and post-natal care, psychiatric services and a full-service family health team. The community centre also offers financial counselling and other resources. Teen mothers appreciate the program because it's an easy one-stop shop and they don't have to go to a hospital prenatal clinic, where they feel judged by the adult women in the waiting room, Dr. Fleming said.

Around the world, health-care organizations are re-engineering their systems to move care outside of hospitals. Kaiser Permanente, a large non-profit health plan in the U.S. that runs its own hospitals and clinics, is providing more care to patients in their homes and over the Internet.

In Canada, Ontario will spend an additional $6 million this year to send more paramedics to the homes of people who frequently dial 911 to make sure they're taking their medication and provide other help managing their chronic conditions. And the federally-funded Canadian Institutes of Health Research is looking at ways of implementing community-based models and giving research grants dedicated to this issue as part of an initiative called the Community-based Primary Health Care Innovation Teams.

Of course, talking about the need for change is easy. Making it happen is the hard part.

In order for any of these changes to occur, observers say, there has to be a wholesale overhaul in the culture of health care in Canada.

Hospitals – and patients – must get used to the idea that the best way to deliver care is to go outside the institution's walls. Governments need to create innovative community-based care models, according to physicians and health policy experts.

"We can't afford not to do this. We're using the acute-care system, which is expensive, for care that should be provided at home," Dr. Turnbull says. "We can do better."

Too often, governments are interested in quick-fix approaches instead of the long-term strategies that would actually result in real change, says Dr. Marcus Hollander, a health-policy expert and president of Hollander Analytical Services Inc., based in Victoria. The health-care system is still designed around acute conditions, like broken limbs and heart attacks. The refusal to evolve to treat the chronic, complex patients who currently take up the lion's share of hospital beds is exacerbating illnesses, contributing to unnecessary deaths and costing the system inordinate sums, he says.

"What I'm seeing now, at a systems level, is an escalating cost spiral that we've self-induced," says Dr. Hollander, who has a PhD in human and social development.

Health-care funding in Canada can be complex, with provincial and federal governments each playing a role. But there's nothing stopping any of them from delivering community-based care.

Instead, however, the current fixation is on piecemeal initiatives, like earmarking more money for home care. But this, according to Dr. Hollander, simply adds to the health-care bill because it creates parallel programs while leaving inefficiencies that are causing so many backlogs in hospitals.

"Putting more money into home care is basically an add-on cost," he says. "The only way you can have any more money and make the overall health-care system more efficient is if you set up these integrated systems using integrated models of care."

When Dr. Hollander worked in the B.C. Ministry of Health in the 1980s, he was a driving force behind the creation of just such a system. The government froze construction of new hospital beds and focused on delivering care outside of the hospital as a way of preventing illness and keeping people with chronic disease at home for as long as possible. The program worked well; in a 10-year period, he estimates the province saved about $150 million.

But the program was dismantled during budgetary crises in the 1990s when the provincial government turned its focus to what Dr. Hollander describes as "quick fix" remedies for saving money, such as cutting home-care funding for everyone except the gravely ill.

Today, there are examples of community-based care initiatives, such as those pioneered by Drs. Turnbull and Fleming, emerging across the country. The problem is they are a patchwork of different approaches lacking a cohesive, system-wide vision that could lead to wholesale change and produce better patient outcomes and significant cost savings.

Adel Doss is back home now, but his sister says he is worse than ever and worries about how long it will be before he has to return the hospital.

"We would like more support," Minerva Doss said last fall while visiting her brother at Sunnybrook. "But the way the system works makes you feel down and…just [want] to give it up."

Carly Weeks is the Globe's health reporter. With files from André Picard.

How one hospital is dealing with Canada's aging population
January 24, 2014
How hospitals are on the front lines in a new era of germ warfare
January 31, 2014
Better by design: How a hospital room can help patients heal
February 7, 2014
Life’s last milestone: Why a ‘good death’ matters
February 14, 2014